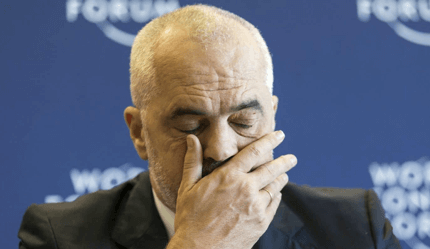 The newly elected Prime Minister sat on a bus filled with family, friends, and supporters, smiling, cheering, and  singing “Sala fell from the fig tree” to his sworn political enemy and just-defeated opponent, Sali Berisha. The controversial old-guard politician with an autocratic bent had been on the scene for over two decades. The modern, charismatic, and liberal artist was about to step in.

Edi Rama, the six-foot-six former national basketball player, art professor, Minister of Culture, Mayor of Tirana, and leader of the Socialist Party, took office after eight years in opposition. Entrusted with the votes of almost one-million Albanians, he was viewed as the one who could break boundaries and lead the country with a new mentality. Or so people preferred to believe.

“As a young artist he challenged taboos. As a professor of the Academy of Arts he pushed against dogma… When I first met Rama in 1993, he was walking down the boulevard in shorts and a T-shirt with stick figures in different sexual positions. The shorts alone were radical at the time” wrote Fred Abrahams, journalist and human rights advocate in his book Modern Albania.

People rightfully saw a different kind of politician in Rama. A critic of Berisha and his policies, he freely spoke his mind. His open letter to Berisha in 1997, which eventually led to him getting beaten up, showed that he wasn’t afraid. His dissidence and advocacy made people believe that he could take Albania in a new direction.

Taking over the Socialist Party in 2005 was the first step. After that, he started paving his way to the Prime Minister’s office, which he got in June 2013 after a landslide win against Berisha. Rama finally had the chance to show he was different. Fighting crime, corruption, promoting human rights and the rule of law, reforming the judiciary, and opening 300,000 new job positions were just a few of his electoral promises, and his supporters expected him to deliver. But it didn’t take long for such expectations to vanish.

Soon before his first term ended, mayors, members of parliament and close family members of his cabinet were found to have criminal backgrounds and records around Europe. The criminal records of Kavaja’s Mayor and the involvement of former Minister of Interior Sajmir Tahiri with members of the underworld were two of many cases.

Drug trafficking emerged as another theme. Rama’s efforts to fight drug trafficking through “invading” the infamous village of Lazarat, a marijuana safe haven, turned out to be a façade. The cocaine laboratory operating one hour’s drive from the capital and a plane full of drugs crashing into the shores of Divjake in southern Albania, rang alarm bells that, despite show operations, drug trafficking was thriving.

The U.S. State Department noted in 2019 that official corruption in the country was pervasive, fostering an environment where drug traffickers operated with impunity Same was noted regarding organized crime and money laundering.

A series of wiretaps published by the German newspaper, BILD, in June 2019, revealed the extent and methods of vote buying activities of the Socialist Party during snap elections in Dibër County in September 2016. The tapes involved not only criminal groups, but also ministers, members of parliament and Rama himself. Along with earlier denunciations of vote buying and intimidation, BILD wiretaps showed a smoking gun.

“You think you have reached the objective, right?” PM Rama asked someone on the phone. “I think so. Based on what I am getting from the commissioners at the voting centers, we have achieved it,” answered a man on the other side.

Earlier that month BILD had published wiretaps showing the Socialist Mayor of Durrës, Vangjush Dako, a close collaborator of Rama, involved in vote buying during the 2017 parliamentary elections.

So far, no one has faced justice. When asked about these events during a press conference in 2019 Rama said: “Wiretaps alone are not evidence. You can’t send anyone to court only with tapes.”

Soon after, Rama filed proceedings against the BILD journalist who published the wiretaps, though he later dropped the case. In fact, this wasn’t the first time he went after journalists, the press, or the freedom of speech itself.

In June 2015, Agon Channel, a private television, was closed after investigations initiated for tax evasion, forgery, and money laundering. Political commentators largely viewed it as an intentional attack because of Agon Channel’s critical stance towards the government. None of the allegations against the TV station were ever proved. Four years later, in April 2019, Agon Channel won an investment arbitration which will cost the Albanian taxpayers at least $110 million. Rama has so far refused to comment on the case.

Recent years have seen a series of attempts to muzzle the press. Attacks, threats and SLAPP’s (Strategic Lawsuit Against Public Participation) against journalists became frequent. Not only against Albanian media but even foreign journalists living and working in the country.  Others have been fired for criticizing the government and some even forced to seek asylum. Rama himself started a smear and bullying campaign against journalists he dislikes, calling them “garbage bins.”

In 2019, the government tried to pass a draconian press law which would seriously impair freedom of speech, despite criticism from diplomats in Tirana. Luckily, its adoption was postponed after comments by the Council of Europe’s Venice Commission. However, the government may be waiting for the right moment to bulldoze it through parliament.

Ironically, in the early 90s Rama’s predecessor Berisha tried to push a similar law, and Rama was one of its harshest critics. It reminds me of the sequence in Star Wars when Darth Vader tells Obi-Wan Kenobi: “When I left you, I was but the learner, now I am the master”. Except that Berisha was never Obi-Wan Kenobi.

“One of the greatest ironies of how democracies die, is that the very defense of democracy is often used as a pretext for its subversion, in which elected autocrats use crises to justify antidemocratic measures,” says Levitsky and Ziblatt in How Democracies Die.

Indeed, many leaders around the world have used the Covid-19 pandemic as an excuse to curtail human rights and advance their political interests. Rama is one of them.

Banning and imposing a disproportionate penalty on protests and demonstrations was the first step. What seemed a measure to protect public health, turned out to be preparation for what the government was about to do.

The demolition of the National Theatre in the early morning of May 17, 2020, while Tirana slept, was the first evidence of the government’s real intentions. Police brutality against those who had the courage to protest was the next, but not the last. Every other protest was forcefully dispersed despite being peaceful. Unmarked police officers detained hundreds of protesters, including journalists, prompting a condemnatory statement from the Council of Europe’s Commissioner for Human Rights.

Various reports show that Albania is making regress in terms of democracy, human rights, rule of law and corruption. According to Reporters Without Borders, Albania lost 9 positions in the last three years in terms of press freedom. Transparency International reports a 23 position drop in its Corruption Perception Index, making Albania the most corrupt country in Europe. While Freedom House categorizes the country as “partly free.”

Sometimes it looks like the country is following the steps of Turkey and Hungary. Rama has frequently paid lip service to Turkish autocratic leader, Recep Tayyip Erdoğan. In fact, he has established close personal, political and economic relations.

Last year the Albanian government unlawfully deported a Turkish citizen upon the request of his Turkish counterpart and refused asylum for another one, despite international reminders of Albania’s international obligations. Rama’s service was paid back with a royal welcome by Erdoğan during an official visit in January and promises of more foreign investment. 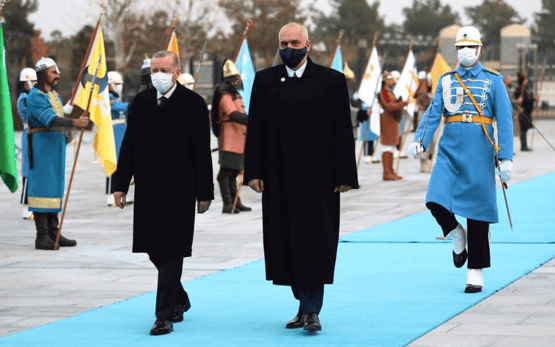 In July 2020, nine months before general elections, Rama unilaterally changed the constitution and electoral code. Critics largely viewed this as a move to weaken the opposition. The Venice Commission labelled the amendments as “extremely hasty” and called on the government to avoid further changes before the elections.

Today, just one month before elections, Rama is not making promises as he once did, but attacking, bullying and calling his opponents “unworthy.”

Fatos Lubonja, analyst, writer, critic, and former colleague of Rama says: “In 2013 he campaigned saying that Albania had become a country in which you couldn’t live honestly because of corruption. He promised to change that. In fact, under his rule in the last 8 years, we have witnessed a dramatic increase of honest Albanians fleeing the country because of pervasive corruption and his strong ties with organized crime, which has made drug trafficking the dominant economy of the country.”

With the electoral rules in his favour, and major media outlets by his side, he seeks a third term. A victory, which the polls predict, would make him the first leader in Albania since the fall of communism to hold power for more than two terms. Eight years were more than enough for Rama to prove himself. Another four would do nothing more but corrupt him and the country’s future, absolutely.

It is time for Rama to go, and the successor not to sing “Rama fell from the fig tree.” Because just like Rama and Berisha before, the new leader might slip, and another one will be waiting under the tree.

This story was originally published by the McCain Institute for International Leadership.