Kosovo Leaders Demand Justice on Anniversary of Another Massacre by Serbia 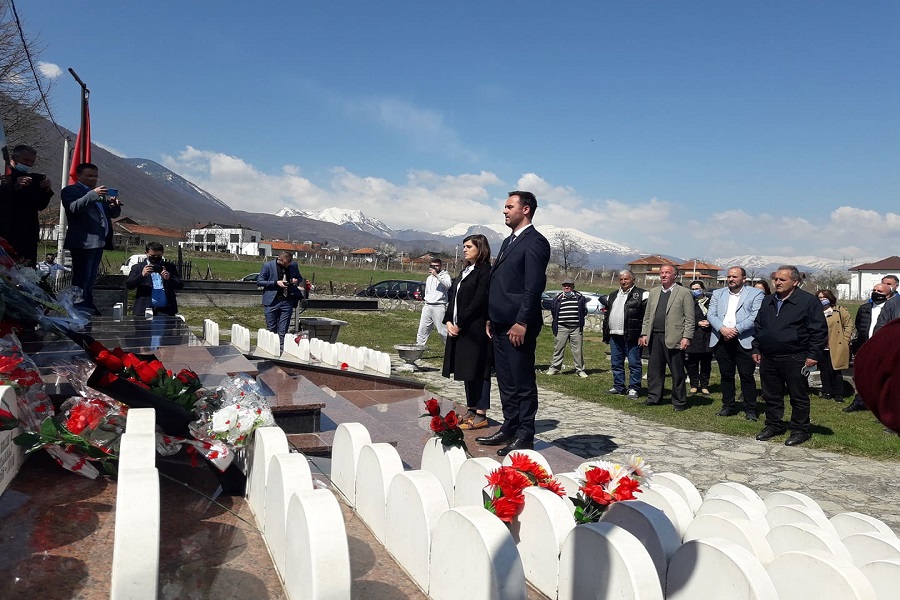 Kosovo commemorated over 80 victims massacred 22 years ago in Lypeniq village of Peja.

The Acting President of Kosovo, Glauk Konjufca said that state institutions should not stop working until justice is put in its place for the crimes and massacres committed by the Serbian regime in Kosovo.

“This village experienced three massacres during the war. Over 80 unarmed civilians have been cruelly killed by Serbian forces. It is our duty, as institutions of Kosovo, to never stop asking for justice, that the Serb genocide to be punished and criminals to not be walking free as it happens in many cities in Serbia,” Konjufca said after commemoration at the victims’ graves.

Konjufca said that nothing has been done towards convicting those who committed these massacres in Kosovo.

“Wounds are still open because there are still missing people and this is a double crime committed by Serbia,” he added.

The Deputy Speaker of the Parliament, Saranda Bogujevci, which survived a massacre herself and lost her family, said that massacre of Lybeniq and other places show the crimes Serbia committed in Kosovo.

“We must work for the justice to put on its place. It is not an easy process but the work should be done, at least for these families to be relieved when there is justice is done,” Bogujevci said.

“They should know that their relatives did not die for nothing, their blood was shed for freedom, but also for justice to be done,” she added.

Serbian forces intensified their attacks against Kosovo Albanian civilians especially after March 24, 1999 when the NATO bombing started against Serbian military bases, by committing several massacres across the country.