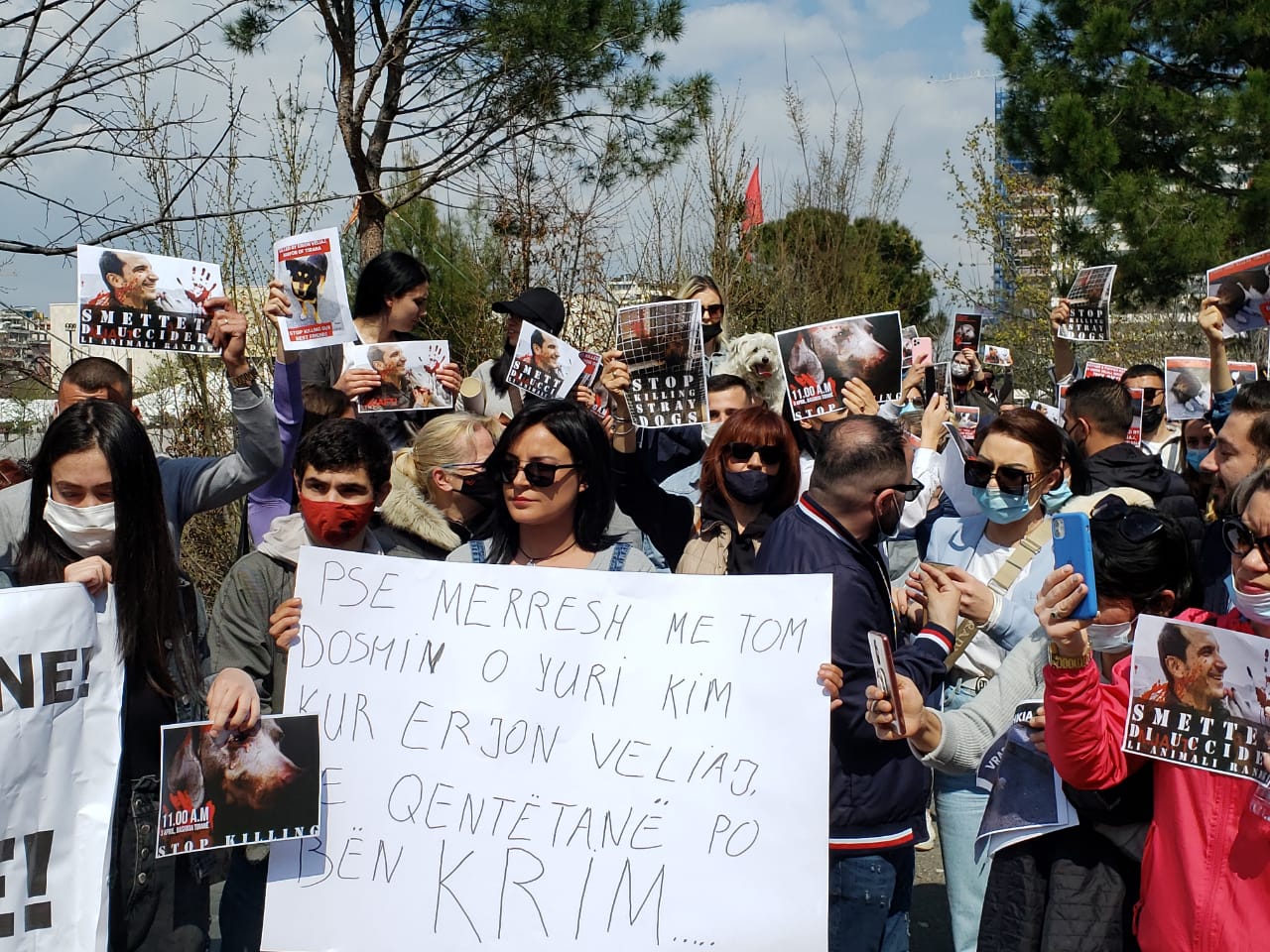 More than a hundred citizens, activists, and dogs gathered in front of the Tirana Municipality today to protest against the alleged mass killing of street dogs on the order of the city and its Mayor, Erion Veliaj.

A protest took place yesterday in Tirana, and a synchronized protest in Tirana and Durres today after video footage emerged of Municipality workers killing street dogs with what was reported to be acid.

They also claimed that the so-called State Veterinary Hospital in Kombinat is supposed to be a place where the dogs are taken care of and rehabilitated. But activists say that they have never been allowed to go inside and have been told that all the dogs that go there are euthanized.

Animal Rescue Albania has accused Veliaj of planting fake stories in the media about a 10-year-old boy who was allegedly attacked by a dog. The story coincided with the furor as a result of the video of the poisoning going viral.

They called on him to provide more information about the incident and called on citizens to punish him with their vote. 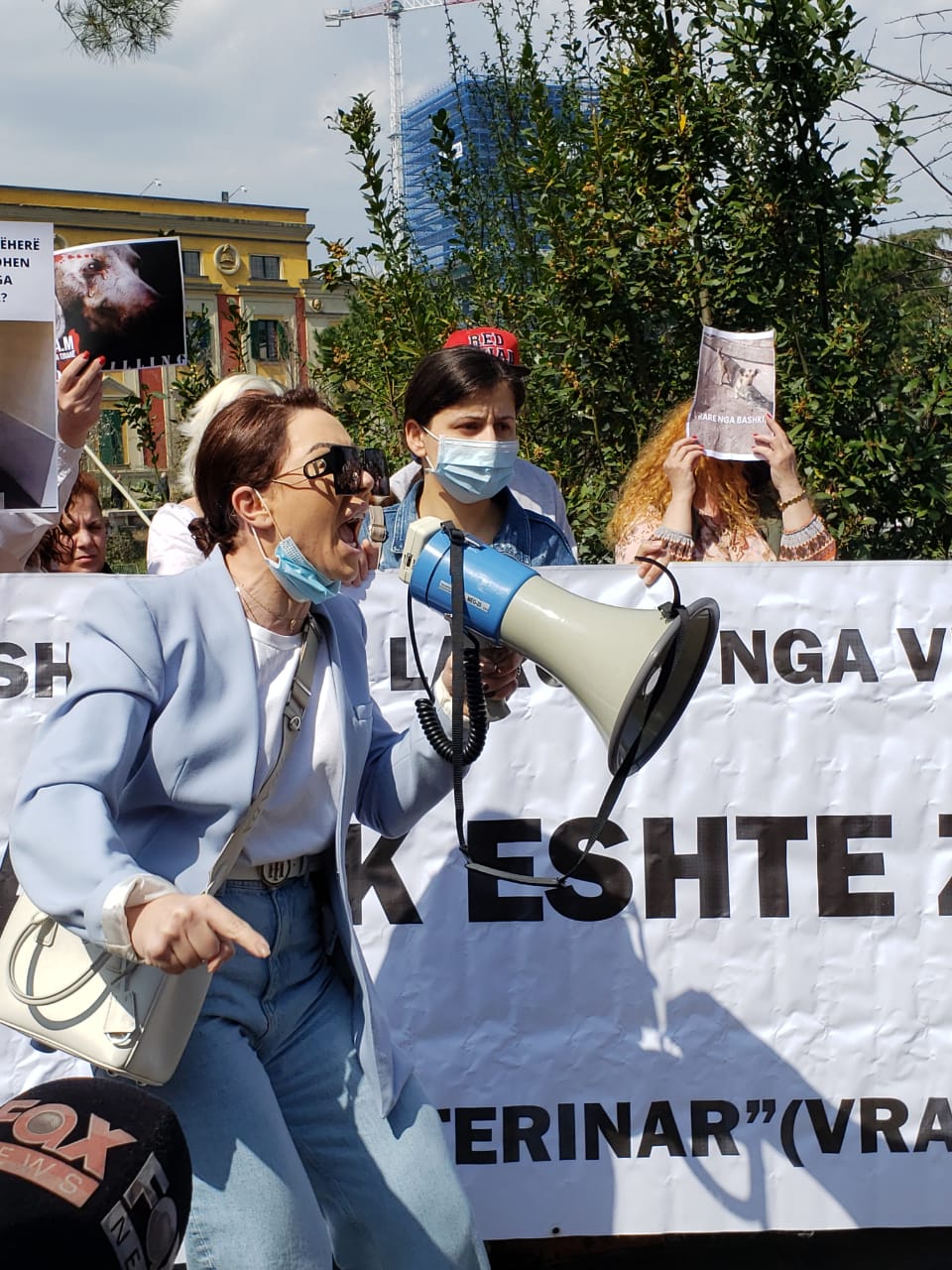 In front of the Municipality today, people held signs calling for justice and accusing Veliaj of murdering dogs.

One sign held by a young girl read: “The world would be a better place if everyone had the ability to love unconditionally as dogs do.”

Another said, “Why you do take Tom Doshi, oh Yuri Kim, when Erion Veliaj is committing a crime?”

A woman holding a baby clutched a photo of a street dog with the text “Killed by Erion Veliaj, Mayor of Tirana. Stop killing our best friends.” 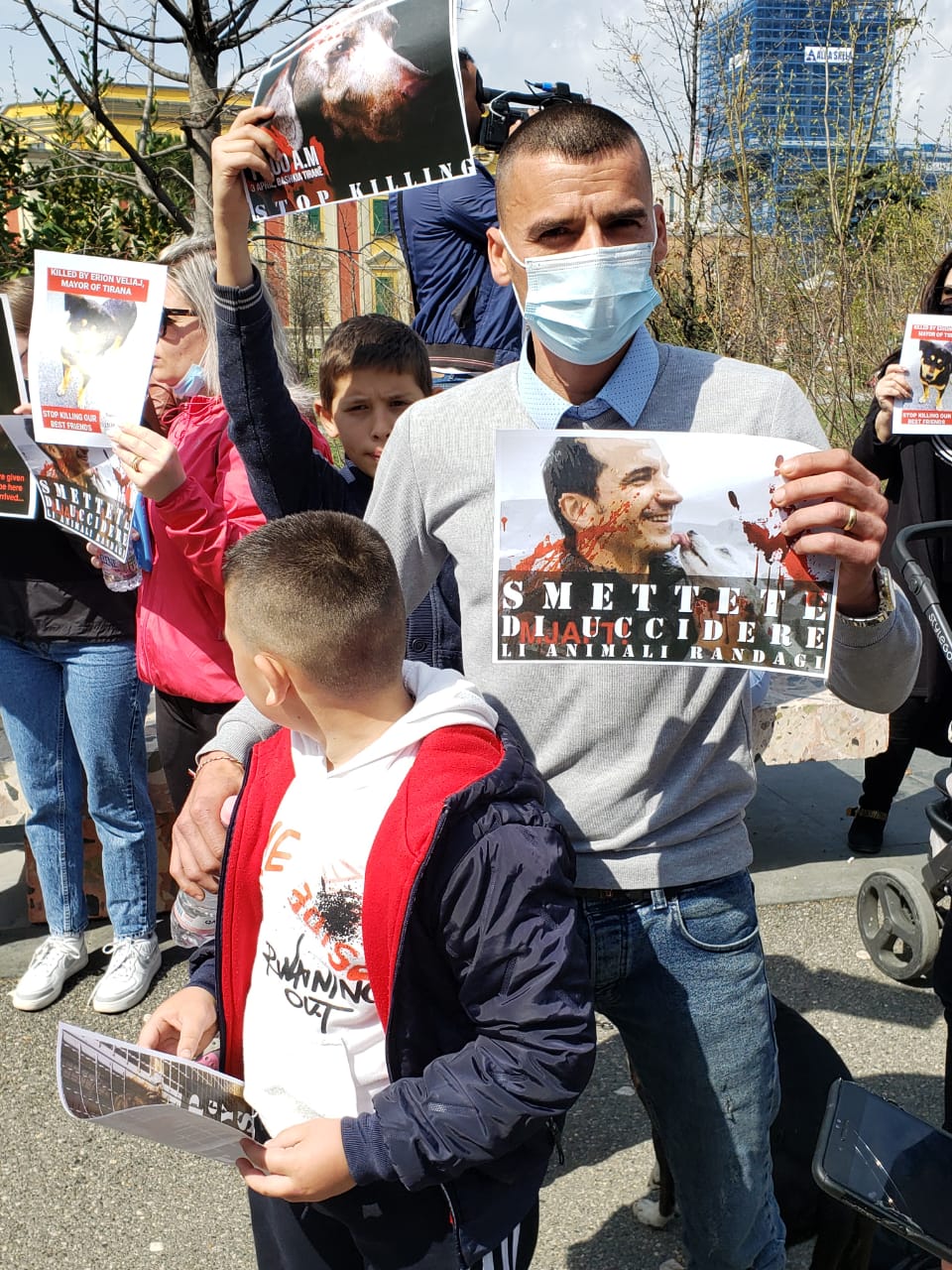 An Italian father and son joined the crowd holding a poster of Veliaj’s face with “stop killing stray dogs”  written on it in Italian.

Those who organised the protest, including well-known personality Dorina Mema, held a large banner stating:

“Killing animals takes away from European Values. Murder is not the solution. Close the Veterinary Hospital (of death) at Kombinat.”

The issue of Tirana’s street dogs has been the topic of much campaigning over the years. There are a number of formal and informal organisations that feed, neuter, and vaccinate stray animals, as well as form bonds with them and seek to rehome those that they can.

In Durres, one organisation was given some land by the Municipality to create a rehabilitation center for dogs. The organisation has invested some EUR 8000 into it, but the Municipality are using it as an illegal dump, meaning most of the site isn’t fit for purpose as well as being dangerous for the volunteers and dogs. 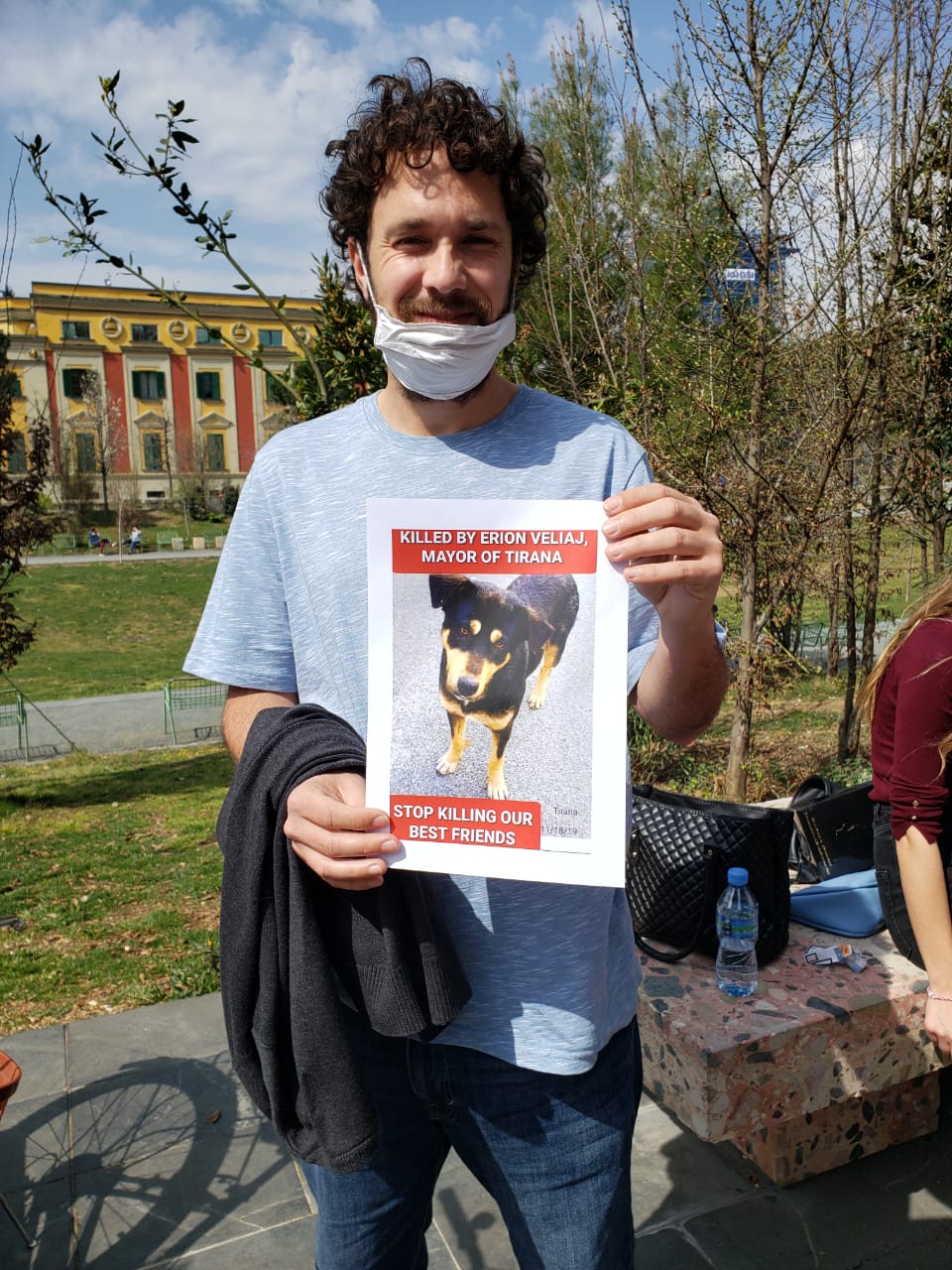 The Municipality of Tirana has been allegedly poisoning dogs for several years. They have denied it but there have been numerous accounts, photos, and videos published over the years that suggest otherwise. The issue of putting poison on the street is a risk to humans and is considered as a public safety issue.

In 2020, Exit investigated allegations that almost 1000 dogs went missing from the streets of Tirana in 2019.

Activists presented Exit with detailed records of the dogs they took care of, when they disappeared, and from where.

They state that while they were able to save 21, the fate of the remaining 944 is unknown. They also estimate the number of dogs taken by the Municipality of Tirana to be much higher.

They observed the following:

In video footage presented to Exit, Municipality employees can be seen violently loading the dogs into cages, some of which were stained with blood. Photos also show dogs with darts in their backs and legs.

In one video, a Municipality worker can be seen and heard being aggressive with the activists after they question him on the fate of the dogs.

Images from within the Municipality pound show dogs being kept in horrendous conditions, looking fearful and with empty food and water bowls. The Municipality denies access to journalists and members of animal rights NGOs but volunteers that managed to gain access said dogs were heavily sedated and “out of it”.

Almost 1000 dogs have disappeared, many of which have been vaccinated, de-wormed and flea treated, and sterilized by volunteers. Many more care for the dogs by feeding them each day in specific places. They claim that the Municipality is rounding them up, murdering them, and dumping the bodies as no one will tell them what happens to the dogs when they are taken off the street.

Activists claim the Municipality used to say they had a shelter where they took care of the dogs but now this story has changed.

“After that, they don’t care anymore and they told us ‘you don’t have to search for them anymore, they are dead”.

Activists added that they were told many were left by the Elbasan-Tirana highway to be hit by car drivers, others were killed deliberately, and others were left where no one will feed them.

At the end of 2020, the Albanian government amended its law on animal rights but legal professionals raised concerns that the wording of the law means it might not apply to stray dogs.

While animal welfare organizations were allegedly involved in the consultation and drafting of the amendments, a legal advisor said that any case regarding the poisoning of stray animals is likely to be rejected due to the terminology used.

“The specific wording of the law means that if we were to file a complaint about mistreatment and poisoning of stray dogs by the Municipality, it would most likely be thrown out to the loophole that a stray dog cannot be considered as a domestic pet.”

Albania has long had problems with animal cruelty, not limited to appalling conditions of domestic pets kept in urban petshops, the captivity of bears and other wild animals in restaurants and “zoos”, and the systemic poisoning and mistreatment of stray dogs by the authorities.