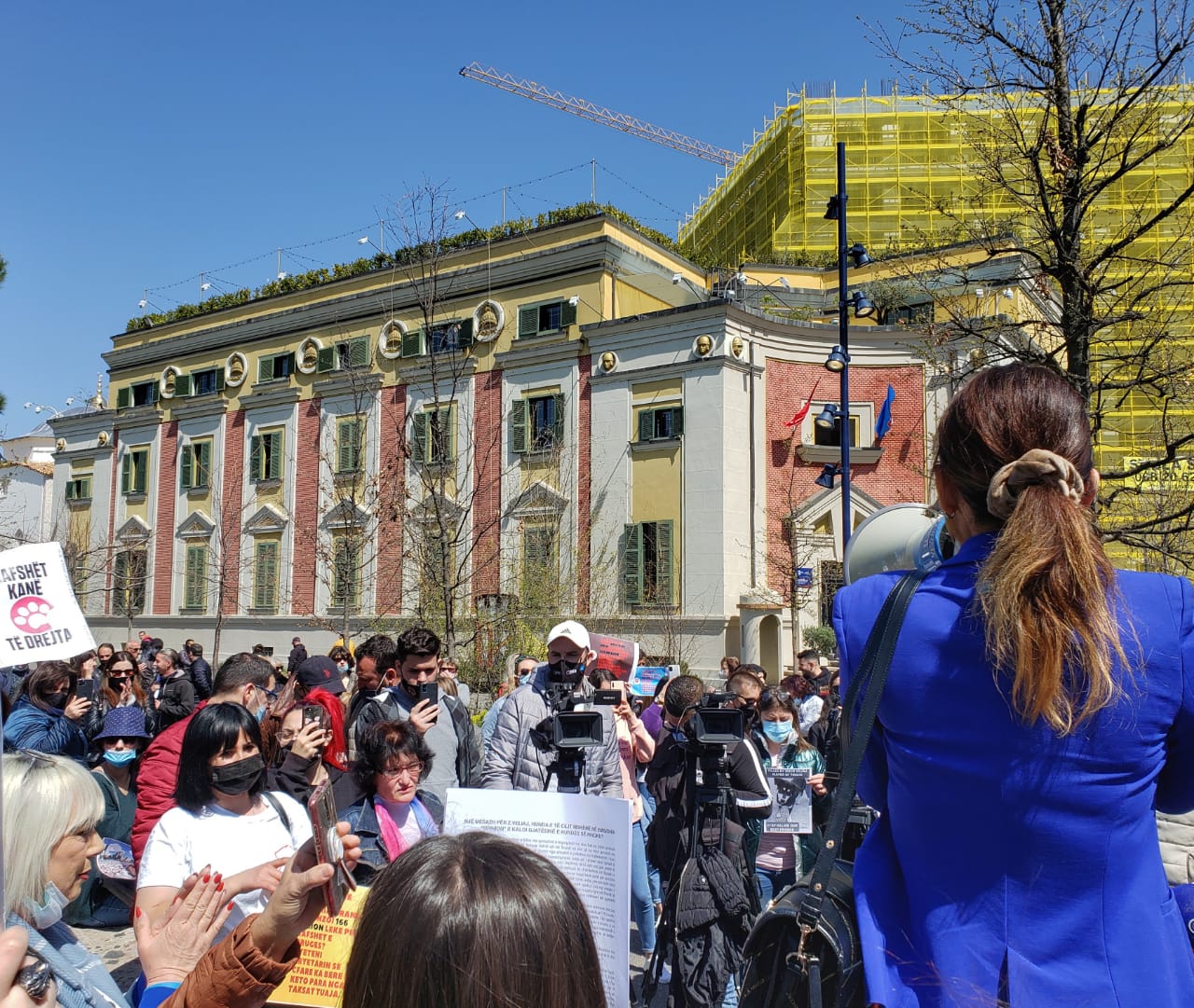 Another protest took place in Tirana today against alleged cruelty and the killing of stray dogs by the Municipality of Tirana, under the Mayorship of Erion Veliaj.

Citizens, and dogs, gathered in front of the Municipality for the third time in a week, to call for an end to what they say is the systemic mass murder of street dogs. They allege that they are rounded up, poisoned, and disposed of, as well as some being kept in appalling conditions in a state-run center. 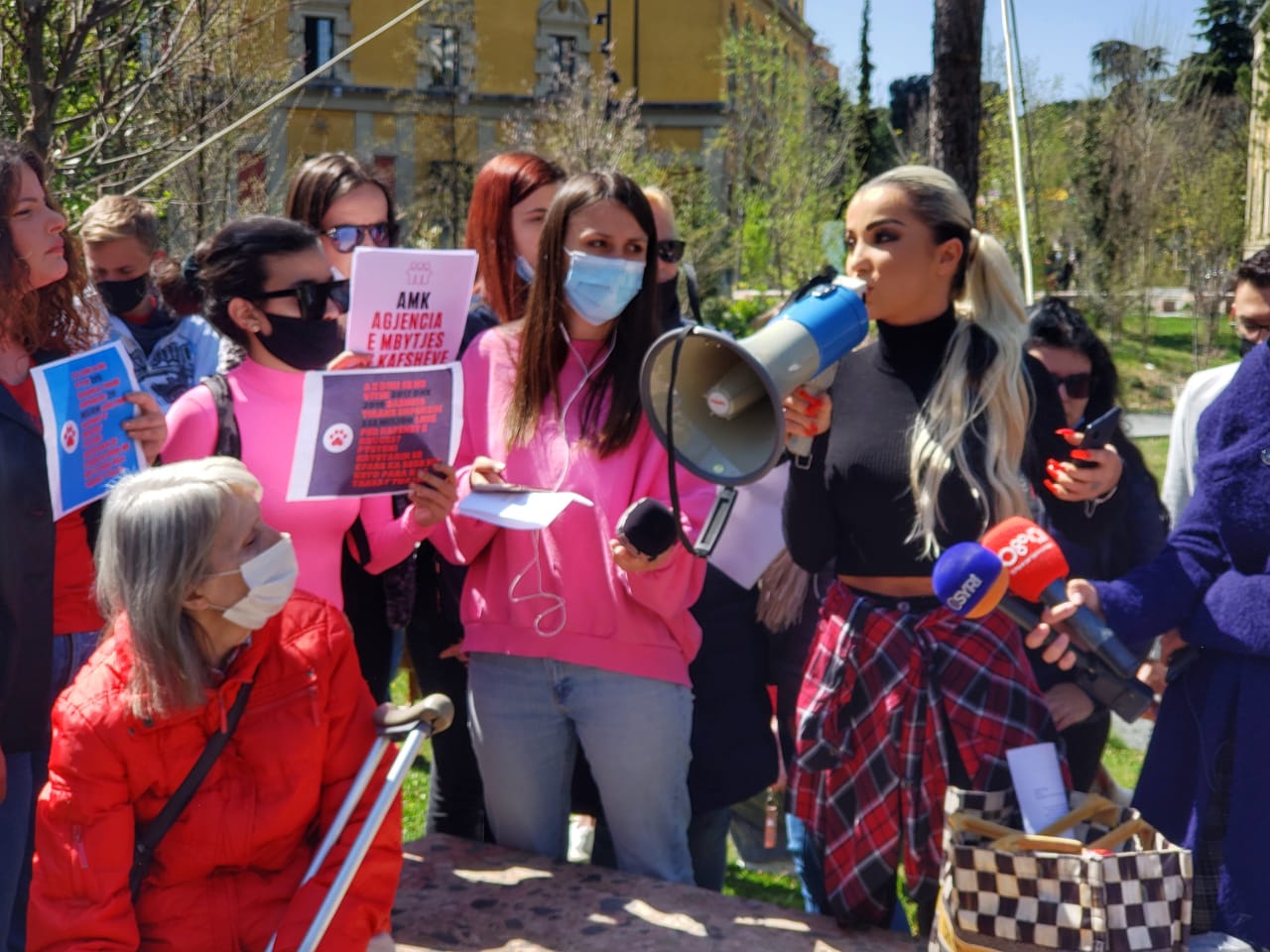 Following the demonstration, the organizers proceeded to SPAK where they filed a criminal complaint against Veliaj, the directors of AMK, the director of the animal shelter, and two veterinarians. They called on SPAK to investigate the matter and identify anyone else who “has a hand in this corrupt and criminal affair to slaughter street dogs.”

Their statement to the media is as follows:

“We have had reasonable doubts since 2016 directly related to the census conducted by the Municipality where there were 15,000 stray dogs in the entire territory of Tirana. Not only have street dogs not been vaccinated and neutered, but after the funds being abused, the dogs have been mistreated in the veterinary facilities. They have been left without food, without a drink, and with a tragic end, murder. We have argued legally and asked SPAK prosecutors to look at how the dogs are treated on the street, in their habitat with savagery and violence….once they reach the hospital, 90% of them do not manage to live.

They accused the Municipality of abusing funds from a 95 million ALL (EUR 773,829) tender that was supposed to be for sterilization. They said this abusive and that the service has not been offered to street dogs. They added they have provided evidence-based claims starting with the number of dogs reported by the Municipality.

In 2016, between mid-October and the end of December, they stated they neutered 2500 dogs. this would equate to 50 sterilizations taking place every day. Activists say this is not possible in a hospital with two operating rooms. They added the facility did not have the capacity to provide rehabilitation that number of animals at once.

Additionally, they said there were significant discrepancies with the amount of anesthesia purchased. They also noted that thousands of black plastic bags had been bought as “medical supplies”. This, the activists say, when combined with video evidence and other information they have collected, suggests that street dogs are being killed, bagged, and disposed of en masse.

Last night on the Opinion TV show, Veliaj claimed that the protests were political and linked to LSI, Activists have denied this, stating that they are members of civil society and general members of the public.

He then claimed that the Municipality does not kill stray dogs, rather they catch, vaccinate, sterilize and then release them.

Exit checked with several veterinarians in Tirana who informed us that a vaccine such as those given to street dogs costs no more than EUR 15. If bought in bulk at wholesale prices, this price can be even lower.

One vet told us that for EUR 50, you can give two vaccinations, neuter/spay, deworm, and treat for fleas.

Furthermore, an investigation by Exit in 2020 found that almost 1000 stray dogs disappeared from the streets of Tirana in one year. Activists had been carefully documenting with written logs and photos, a large number of strays on the streets of the city. Over the course of the year, 965 were taken, of which they were able to ‘rescue’ 21. What happened to the other 944 is not known.

An activist told Exit they had asked Municipality workers what happens to the dogs.

“They told us, you don’t have to search for them anymore, they are dead.”

Activists added that they were told many were left by the Elbasan-Tirana highway to be hit by car drivers, others were killed deliberately, and others were left where no one will feed them.

Claims have also been made that at the Municipality-run Animal Shelter Centre in Kombinat, the animals are killed with acid. Activists have never been able to go inside the center as the Municipality claimed its private property, despite it bearing the Municipality of Tirana sign.

Roza Lati said she had videos showing them being killed with acid, and photos showing blood-stained rooms. She posted some unverified videos and images on Instagram which appear to show appalling conditions within an animal boarding facility.

Activists have called for transparency and to be able to see inside to check on the welfare of the animal or for the center to be shut down completely and a new, better alternative provided.