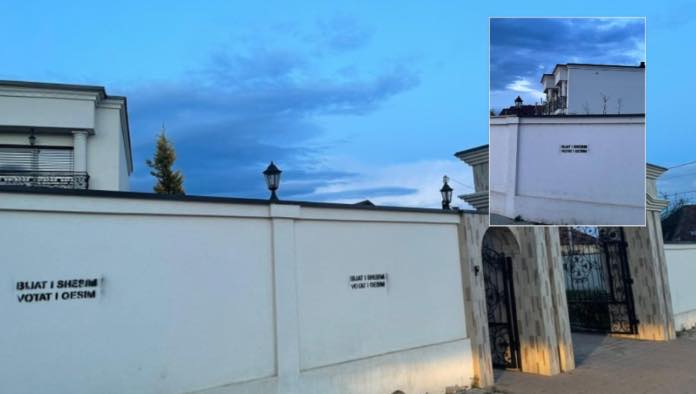 Sexist, derogatory graffiti was written on the wall of the house of Adelina Grainca, a newly elected Kosovo MP who left the Democratic Party of Kosovo (PDK) and joined the ruling Vetevendosje.

“We sell our daughters and we give away our votes” read the graffiti, on which the Kosovo Police started its investigations.

Grainca left the party with which she won the mandate on the day when Vjosa Osmani was being voted for the President.

Despite PDK’s stance to not support Osmani’s candidacy, Grainca’s first sign of joining Vetevendosje was when she entered the parliamentary session accompanied by Prime Minister, Albin Kurti and voted for the new President. Minutes later, it was confirmed she officially joined Vetevendosje.

In a reaction that day, PDK said that Kurti offered money and privileges for her family’s businesses.

The head of Vetevendosje’s parliamentary group, Mimoza Kusari-Lila called this an “ugly” act, adding that if PDK does not condemn it, then the answer to why she left the party is there “on the way how this party treats a young woman who thinks differently”.

“Graffiti on the walls of the Grainca family house is the reality of misogyny in Kosovo politics, according to which girls and women are not considered able for of decision-making, but as exchanging currency and implementing party orders,” Kusari-Lila said.

The spokesperson of PDK, Avni Bytyci said that his party never put itself in such a “low” level by attacking someone’s house and family for political motives.

He added that the attack is unacceptable for PDK, calling on authorities to investigate the case.

“We call on Kosovo Police to investigate the guys by suggesting to begin the interviews from Vetevendosje Movement, as it seems that this party has “identified” the authors only hours after [it occurred],” Bytyci wrote on a Facebook post.