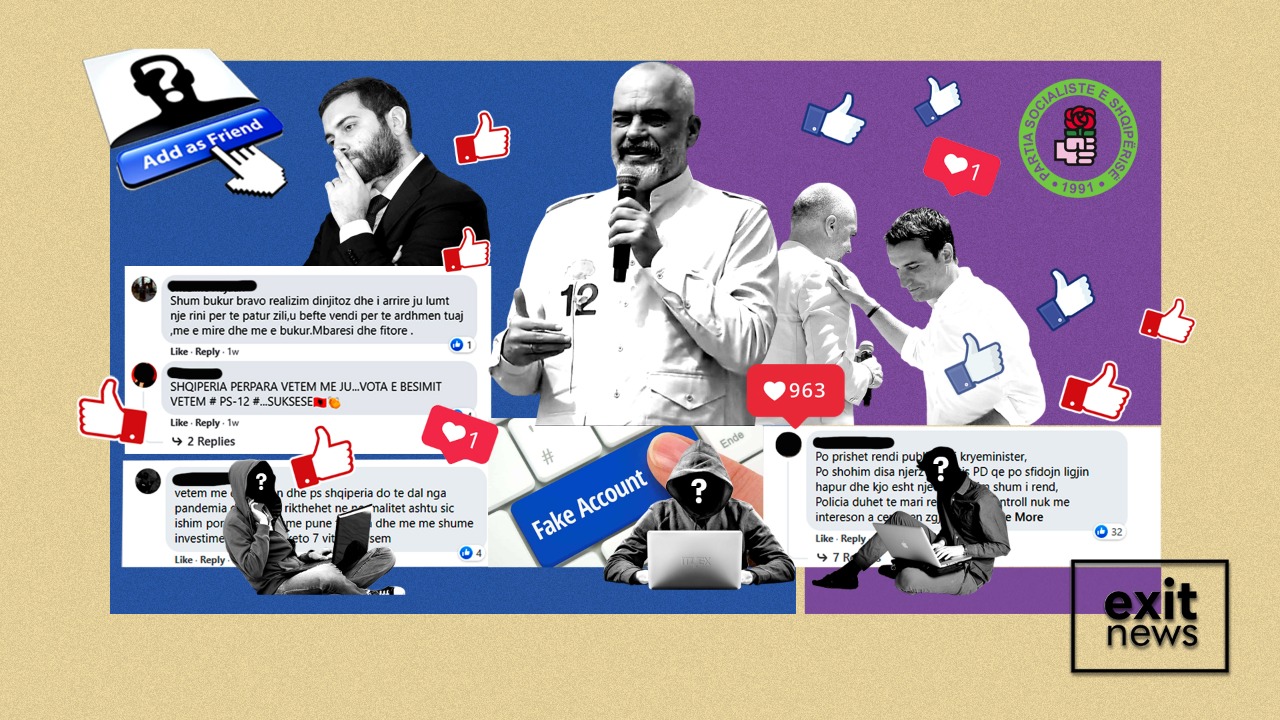 Part one of a two-part investigation.

In 2019, just before the controversial local elections, a network of fake profiles and pages sprung into action on Albanian Facebook.

Exit found a web of fake profiles, each controlling potentially hundreds of different pages. The pages were set up to look like profiles and included fake (Albanian) names and pictures stolen from the LinkedIn profiles of foreign businessmen and women.

These profiles and pages acted in a coordinated manner, commenting on politicians’ posts and descending en masse on articles that criticize them or painted them in a less than favorable light. The majority of activity took place on profiles linked to Prime Minister Edi Rama and Mayor of Tirana Erion Veliaj.

Over the course of several months, Exit found hundreds of these pages. Every time a politician went ‘live’ or posted information on a new project, the pages would spring into action, posting comments like “congratulations bravo Edi Rama the builder of Modern Albania, you deserve the vote again”, “best Mayor ever, God bless” and “you are the future Albania needs.”

Others kept it short and sweet with plenty of “bravo” or “success”, or simply just an emoji of a muscled arm flexing.

In terms of portals or individuals that posted information of scandals linked to the government, the same profiles would post abusive messages and attempt to hijack the post completely. Some media portals found themselves inundated with comments and verbal attacks from tens of fake profiles and pages.

As the year went on, further investigation revealed that some of these pages were posting support for multiple politicians’ profiles. Exit discovered that by mid-July 2019, a large number were commenting support for Prime Minister Edi Rama, Mayor of Tirana Erion Veliaj, and even political figures in supposed opposition.

“These meetings show how much our country supports Kosovo in such situations”, and “Unity in difficult and good days, we are one and we know how to remain. Congratulations, this is important for our nation and for Kosovo.”

Then in 2020, ex-Facebook employee, Sophie Zhang published a 6000-plus word memo where she denounced “multiple blatant attempts by foreign national governments to abuse our platform on vast scales to mislead their own citizenry.”

During her time at Facebook, she found that political leaders from around the world were amassing large numbers of “fake likes” on content posted to their Facebook pages. In some cases, up to 78% of some ‘likes’ were found to be fake. She found, like Exit, thousands of Facebook Pages that had been set up to look like profiles.

The modus operandi was a politician or communications manager who would publish a post and thousands of “dummy pages” would spring into action and start liking or commenting on the post, making it appear the figure was more popular than they actually were.

Countries mentioned in her explosive denunciation include Honduras, Azerbaijan, Brazil, Russia, Ukraine, Bolivia, Ecuador, Spain, and India. But then, she stumbled across Albania. She told the Guardian she discovered a network of fake pages linked to political leaders.

This is exactly what Exit had published just five months earlier.

When Exit published the initial investigation in 2019, it went viral. People became acutely aware of how Veliaj and Rama in particular were using fake profiles and pages to manipulate public opinion and create fake “support”. So by the time the next election came around, the approach was different.

During the run-up to the 2021 general elections, Albanian politicians stepped up their online presence. Live streams, stylized videos, photos, and rambling statuses were posted across multiple platforms. Once again, they were inundated with hundreds, if not thousands of supportive comments. 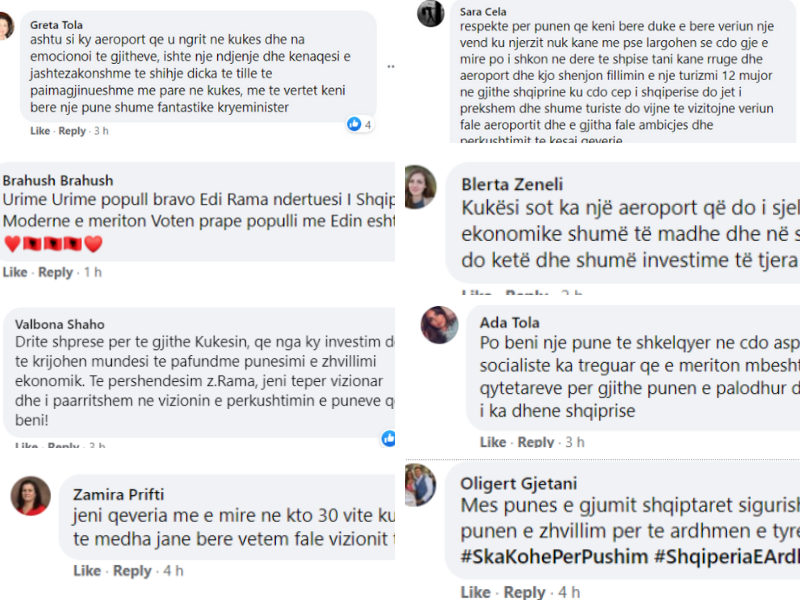 Over the course of just three days, Exit analysed activity on Rama’s Facebook account. While there was still a high number of fake pages, the majority of comments came from fake profiles.

Analysis showed that images had been taken from other places on the internet and had been given Albanian names, characterized by a common surname (Cela, Zeneli, Kola, Hoxha etc).

Other profiles included nicknames or names that were Albanian sounding, but obviously not real, such as Ali Ali, Brahush Braush, and Gerta Gerta.

Those that did not use stolen photos, used images of flowers, flags, sports teams, or other kinds of logos.

They were otherwise easily identifiable due to having few friends, little to no timeline activity, and no usual account activity such as milestones, check-ins, group membership or page likes. Exit also noted that the language used was irregular and didn’t include any dialects or geographical variations, as you would expect with genuine content.

They appear like phantom accounts- faceless, nameless, and with no activity other than posting rousing comments on Rama’s posts.

The investigation also revealed that a significant number of comments were being left on live videos. This generated the illusion of support but makes the retrospective checking of profiles more difficult.

It was also noted that posts were apparently monitored as critical comments were often deleted. While some remained, Exit observed that large numbers were either removed or hidden, again distorting the reality of public political rhetoric. 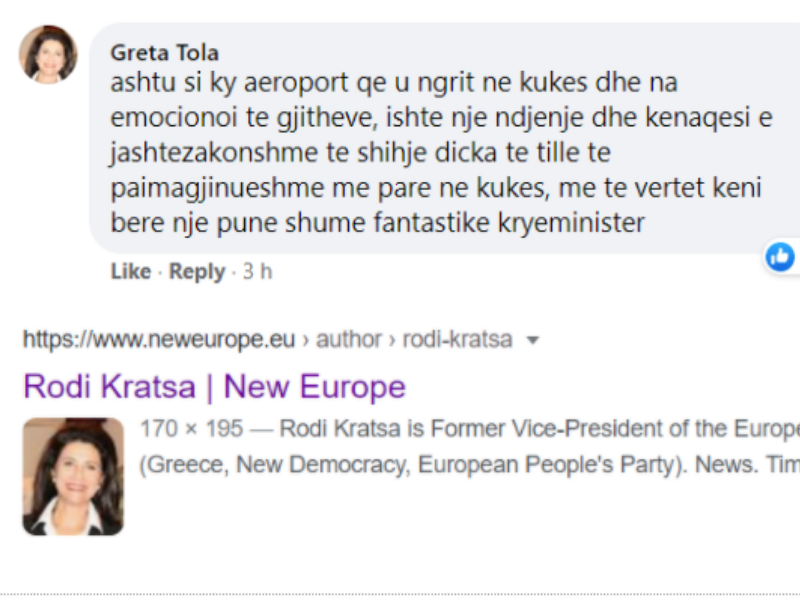 Veliaj, on the other hand, seems to have taken a slightly different approach. Since Exit’s 2019 revelations, inauthentic activity seems to have moved away from the fake-page approach, and instead focusses on seemingly fake profiles and getting employees of the Municipality and its departments to share, comment, and like.

Exit found a number of active fake profiles on his posts, but also a higher number of employees than on Rama’s pages. Critical comments on Veliaj’s pages were also very quick to disappear.

An Exit journalist left a critical comment and it was removed in under three minutes. Veliaj is also quick to block those that criticize him- there is a long list of journalists, activists, and members of the public who are blocked from his Twitter, Facebook, and Instagram pages.

In October 2019, Exit revealed how employees of ministries, state institutions, and other authorities including the police, were required to share pro-government propaganda on Facebook. They were also required to attend live streams, post comments of support, and give likes. Their activity and compliance with the requests would be monitored weekly and those who didn’t toe the line risked losing their jobs.

Much of this coordination is done through WhatsApp groups with the head of department or line manager pasting the links they are required to share, like, and comment.

An employee of a ministry told Exit:

“They tell us to comment as well, things like ”bravo “ and ”this is the party we want. It’s embarrassing having to post them- my friends and family know it isn’t genuine but we have to do it.”

These claims were once again confirmed by Exit in 2019 and right up to the present day.

A significant portion of comments not left by fake profiles or pages were made by employees of the state. These included State Police, Armed Forces, Director of Labour Office, the Municipality of Tirana, and teachers at a number of state schools.

Under Albanian law, it’s illegal for civil servants to publicly express political beliefs. Furthermore, they and the police and armed forces are not allowed to campaign or support an electoral candidate or party.

Yet despite this, state employees including civil servants and security forces are forced to share and propagate Socialist Party and government propaganda at the risk of losing their job. One police officer with the State Police told Exit in confidence that despite being a lifelong supporter of the Democratic Party, he has been forced to attend PS rallies outside of working hours.

Exit also looked at Twitter for both Rama and Veliaj. A Twitter audit tool revealed that out of Rama’s 360,825 followers a staggering 71.4% (257,629) were fake. With the median at 32 and ‘high’ considered 49%, Rama’s score was quite literally off the charts.

In contrast, Exit journalists did an audit of their own accounts and the highest score observed was just 20%.

But the Socialist Party has another social media weapon up their sleeve. In 2019 and 2020, Exit became aware of a German company, owned by an Albanian man called Aldor Nini. The company, Acromax, was appearing on Facebook and Youtube in ‘take down’ messages. These messages appeared on posts showing footage of political candidates speaking and even other forms of posts, alleging copyright infringement.

Civil society raised the alarm as they alleged Acromax were only targeting footage that painted the Socialist Party and its figures in a bad light, leaving positive content, and criticism of opponents online.

Exit contacted Nini in 2019 who admitted that they had a business relationship with the PS. He said this included work such as blocking unauthorized usage of their copyrighted material such as pictures and videos, working with Facebook to report fake news about members of the PS, and using automated systems which search for “matches”or “fake news” and reports to the applicable platform.

When Exit asked whether the PS makes specific requests for Acromax to target certain posts, Nini again confirmed the work they do for the party and even provided a list of articles.

“Probably it would be better to send you a list of all articles we have taken measures against on behalf of the PS…” Nini said.

Then in 2020, he told Exit that Acromax “does not provide services for political parties.” When questioned further on the discrepancy between the two comments, he said he didn’t know when the relationship had ended. He then threatened Exit with a SLAPP that never materialized.

Exit’s experience sparked an international investigation and calls to the German ambassador to address the issue, but still, Acromax continued with their work.

From the data gathered by Exit, it’s clear that much of the popularity of Albanian politicians is generated by fake pages and profiles. This outpouring of false support is designed to influence public opinion and make it seem like the governing party is more popular than it actually is.

It creates a false narrative whereby members of the public, who may be questioning who to vote for, are likely to be influenced by ‘hive mind’ and vote for who they believe is popular. The promotion of events, political rallies, and other electoral activities on Facebook, accompanied by sometimes thousands of praising and adoring comments, is also likely to have a significant impact on the opinions of the public.

Likewise, when media or individuals criticize the government and are attacked en masse by fake pages and profiles, this creates fear in users to voice their opinions. It also makes them think that if there are so many people supporting the party vehemently, then they must be right.

This when combined with the hundreds of thousands spent on Facebook advertising, and more than the lion’s share of airtime on television, and word counts in the leading online portals, creates a rhetoric that the PS have more support than they actually do.

Coordinated inauthentic activity of this kind is a significant threat to Albania’s fragile democracy.

Part two, which will be published tomorrow will include an exclusive interview with Sophie Zhang the Facebook whistleblower on what she found in Albania, possible explanations, and what it means for the country.