Anti-Femicide Protest in Elbasan: ‘The State Has Failed Albanian Women’ 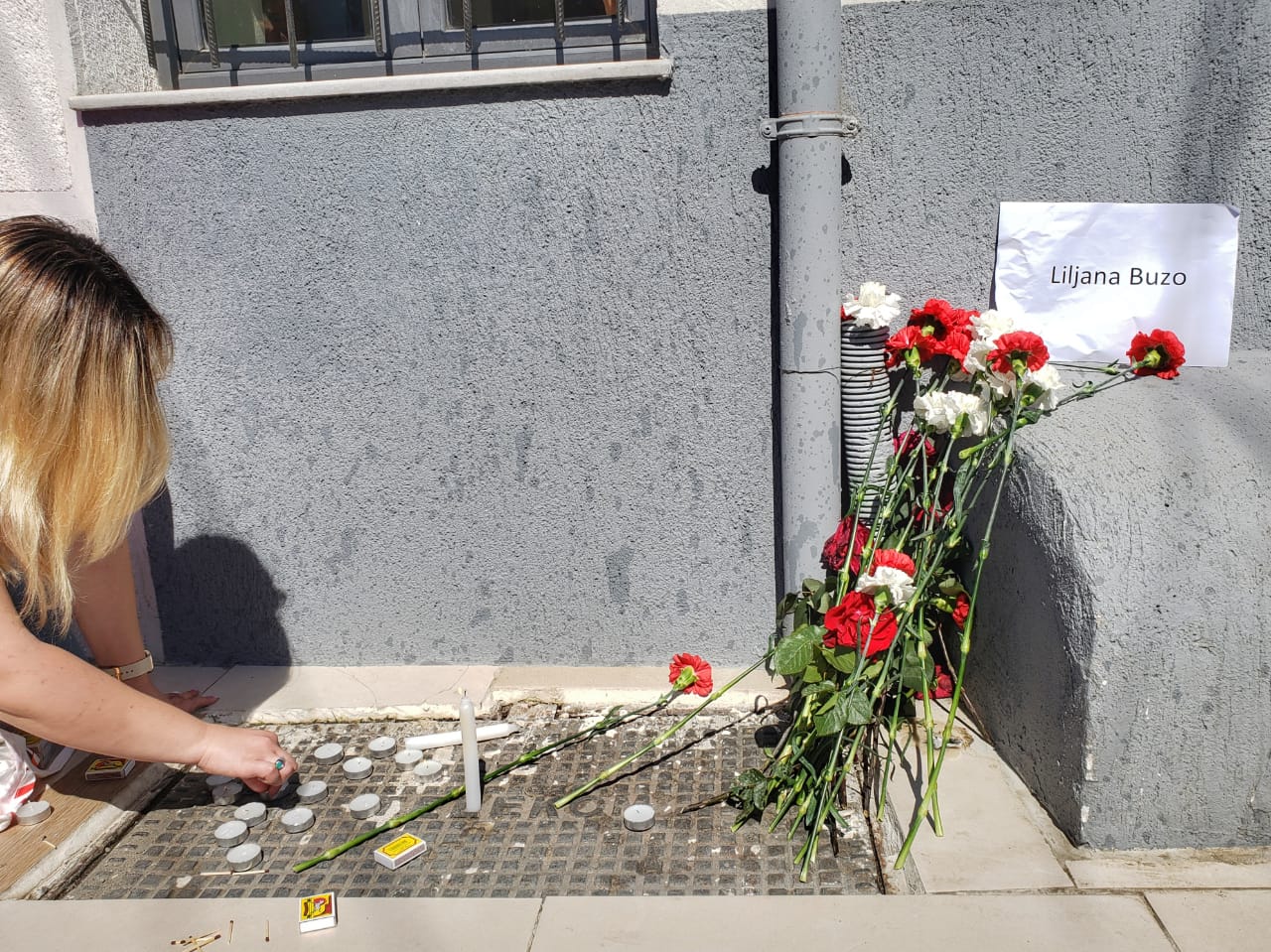 The woman, 54-year-old Liljana Buzo, had initiated divorce proceedings against her husband and has just left the court, accompanied by her son. She had reported that Koco, a former police officer, was jealous, violent, and emotionally abusive.

Today, in the same spot where she lost her life, women laid red and white flowers and lit candles in her memory. Having marched through the streets of the city, then stood in the road to protest against the patriarchal system and the failure of the state to facilitate a safe society for Albanian women. 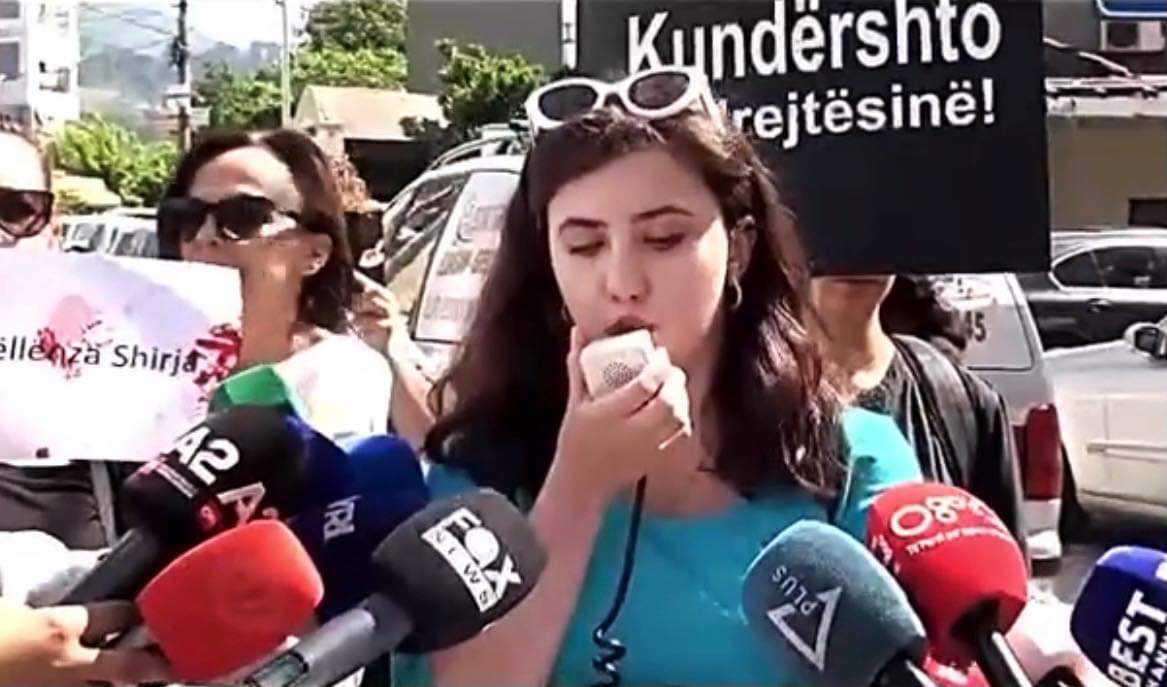 “All you people here, the men, you have to wait because we are occupying the road. We are occupying the public space that is usually occupied by all of you, you who are ready to kill women without batting an eyelash,” one young woman, Gresa shouted into the megaphone.

She stood firm in the middle of the road, defying the line of cars that jammed the street, beeping their horns in frustration and impatience.

“We are not moving from here. You are annoyed that we are taking up public space now, but you need to understand we feel this way 365 days a year,” she added, her voice becoming hoarse.

Liljana had sought a protection order for domestic violence and jealous behavior. She then wanted to divorce Koco, something which he deemed unacceptable. So he took a knife and a Kalashnikov, stabbed and then shot her in the back.

But this is far from an isolated incident. In five months, five Albanian women have lost their lives at the hands of their current or ex-partner.

The women protesting believe that ultimately the state is responsible. Not only is it a patriarchal state, they say, but it doesn’t provide proper support structures and assistance for fleeing violence.

But this is not just an opinion, statistics from the police show that in 2020, only 13% of domestic violence complaints to the police, were prosecuted.

We also know that 53% of Albanian women will suffer at least one form of domestic violence in their lives. Additionally, the majority of cases go unreported due to fear, lack of confidence in institutions, and not having anywhere to go once the complaint has been filed. Rozalba, a women’s refuge in Lezhe home to 20 women and girls is set to close unless it can secure more funding. The state doesn’t help and private funding has all but dried up.

Many women remain dependent on their husbands for sustenance, a roof over their heads, and many husbands want things to remain that way. While things in Tirana may be moving at a slightly quicker pace in terms of equality, it can be a different story in towns and villages. 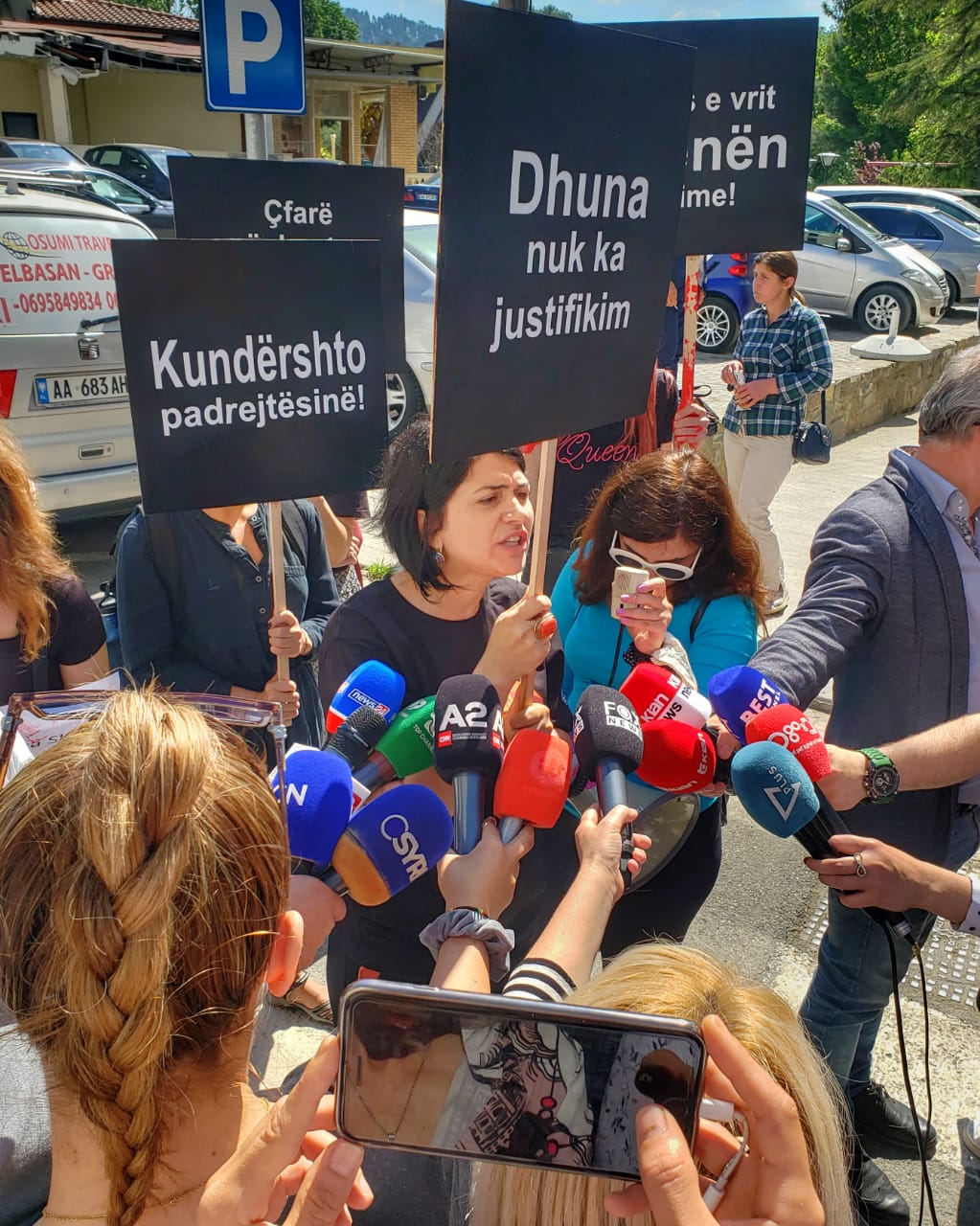 One woman who asked for her name not to be published explained that there are still parts of the country where women are not allowed out of the house.

“They are segregated in the home, not allowed to go drink a coffee outside, the daughters leave school early. Their job is to take care of the home and the men, and have babies.”

On the topic of divorce or leaving an abusive partner she says that for many, especially in traditional areas, the idea would be unthinkable.

“They see divorce or leaving the husband as a shame, they would be judged by family and the village. Instead, they stay and suffer and don’t ever speak up,” she adds.

Today’s protest in the streets of Elbasan, a poor and conventional city, caused quite a stir. The men that filled the main boulevards coffee shops sat with a look of confusion on their faces as these women, dressed in black, told them to essentially get off their behinds and learn to treat women with respect.

For some, it was probably the first time a woman had ever raised her voice in their direction.

But are the protestors positive that something can change?

Deni Sanxhaku a member of the Feminist Collective who has been behind several protests against femicide recently, said:  “We cannot expect to see a change until we see a change in the economic system which is embodying this oppression structure. It will take a long time for us to change it. But that won’t stop us, as feminists, as women, because we believe in a future that is more inclusive and that is equal and provides justice for all women.”

She added that making a change requires cooperation between all oppressed members and groups to ensure their voices are heard.

On the subject of the younger generation, she explained that there is hope, but that still, collaboration is needed.

“We often say that Albanian society is apathetic, but when we look at the thousands of young people who protested against sexual violence last June, and those who protested against the unjust killing of a young man by a police officer in December, we can see there is hope. But we need to consolidate this energy, this anger, and channel it into something proactive,” she added. 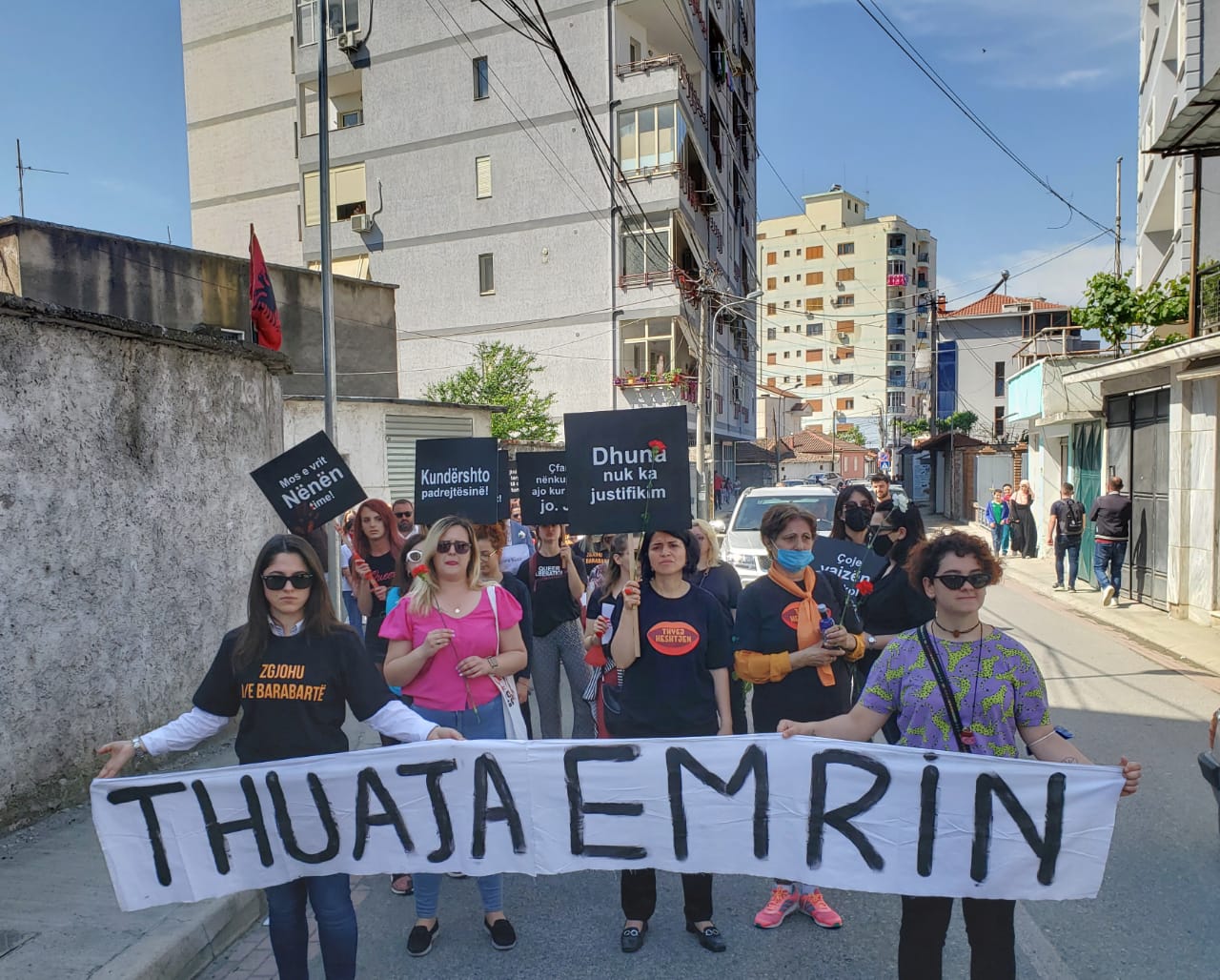 But the change also needs to happen in the educational curriculum, in schools and kindergartens, and within the family unit.

“Where the family fails, the state should come in, but they don’t,” Gresa explains.

She goes on to explain how in eight years of the Edi Rama Socialist government, there have only been neo-liberal policies that benefit the 1%. Nothing trickles down to the women working for less than minimum wage in a shoe factory, who cannot afford to leave or even get a lawyer.

“What is the state offering to them? To protect their lives? To empower them? Our entire life is a protest because we are women.”