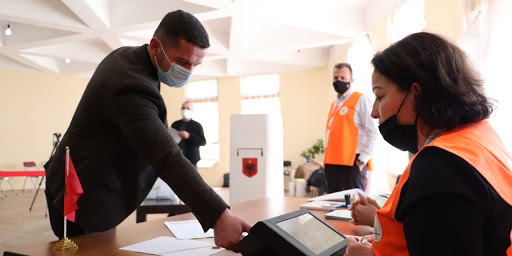 On May 19, Deputy State Commissioner Lealba Pelinku, called to testify by the Central Election Commission (CEC) to explain the issue of multiple voting on behalf of the PD and Social Movement for Integration (LSI), ruled out that such cases of electoral fraud had in fact happened en masse during the April 25 elections.

Under the June 5 agreement, Pelinku was appointed by PD as the person who would be responsible for overseeing the use of technology during the elections.

Since their defeat on April 25, the opposition Democratic Party (PD) has contested continuously the results of the elections, calling them a “massacre,” and asking that they be repeated in 9 of 12 electoral districts.

In making their case, PD’s lawyer, Marash Logu, claims to have presented evidence of extensive vote buying by the PS—including proof of extra legalization permits and millions spent in new jobs with the administration and salary bonuses. In addition, the PD states that they have also found evidence of vote rigging, and in particular issues with people who may have voted several times, based on data gathered from biometric fingerprint scanners.

“The fingerprints of [only] 47 people were traced back to 312 voters, which means that each person voted [on average] seven times, thus affecting the election process,” Logu said last Friday.

Pelniku explained that the system, by cross-referencing the gathered data, is able to catch people who have voted more than once at different polling stations.

She confirmed a case caught in the Gjirokastër district, where a CEC member had voted both at his polling station and at the center where he was assigned to serve as an election commissioner.

Pelinku stressed that the case is being investigated by the Prosecution, as the person had abused a convenience established by electoral law, which allows commissioners to vote at the center where they are serving during election day.

She claimed that the electronic identification system made it possible for people to vote multiple times. So, the same person could vote in the same polling station using different identity cards—however, their fingerprints would be recorded as being the same.

Pelinku, however, ruled out that this type of electoral fraud had indeed happened in reality. According to CEC data, those instances of the same fingerprint being traced back to several voters in fact belonged to the operators of the device. In most cases, operators used their own fingerprints to compensate for the fact that some voters’ own fingerprints, mainly the elderly, were not recognized by the machine.

Whenever this happened, the CEC was notified by phone and there are reports that confirm it.

Pelinku reiterated that the procedure was marred by irregularities and should be investigated to standardize the process, but there was no real proof of multiple voting.

The current system offers another guarantee against mass voting, namely the presence of independent commissioners and observers from opposition parties at each polling station.

The Committee of Complaints and Sanctions at the Central Election Commission has rejected every one of PD’s requests, but the party has moved to appeal these decisions before the Electoral College. This latter has already sided with the Committee in two of the five cases presented to date.