A Visit to the Private Library of Gjergj Fishta 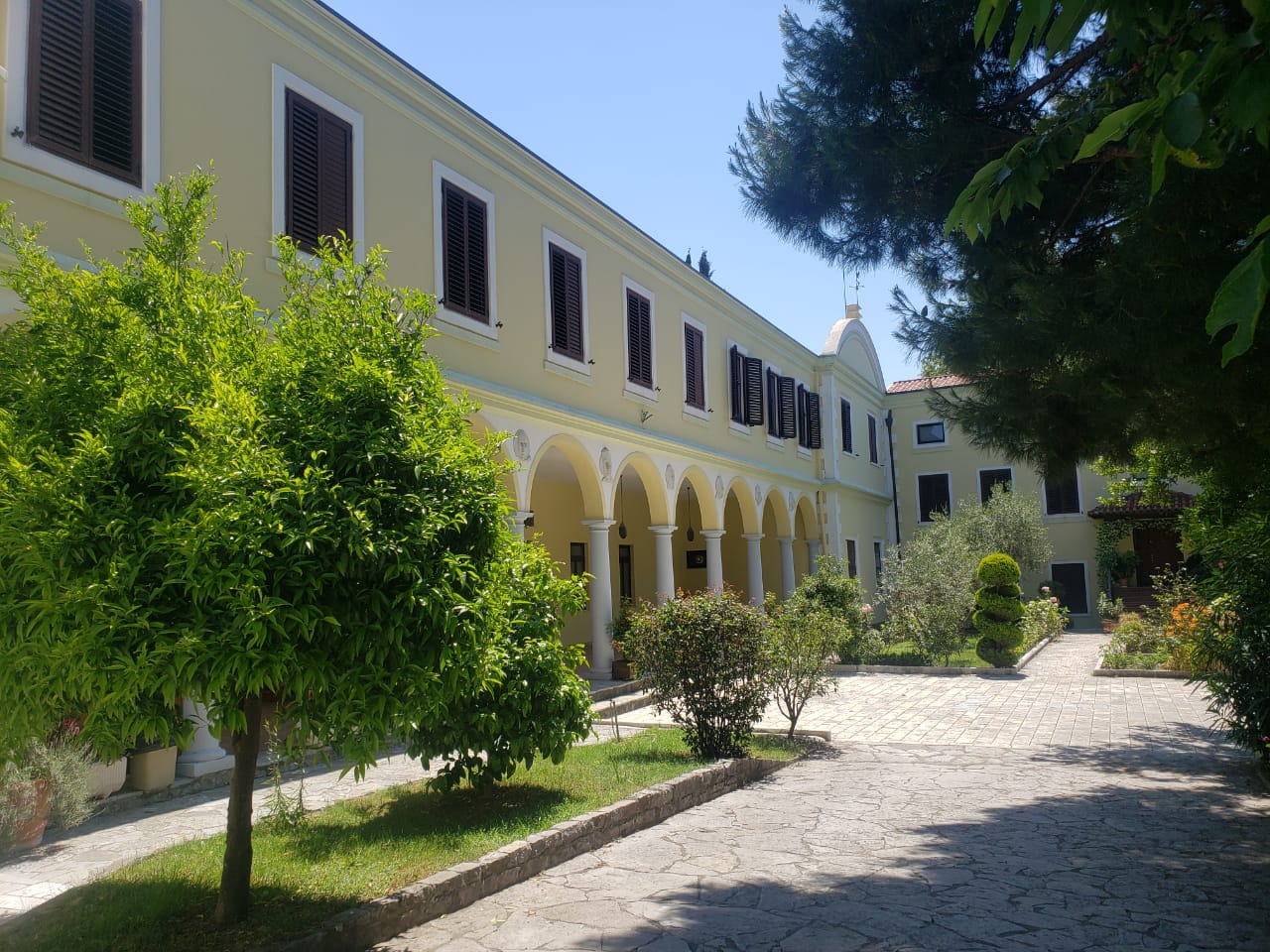 On the edge of Shkodra’s historic center sits the Catholic Franciscan Church. Simple, whitewashed, and set in a small square, its construction started in 1875 under the watchful eye of Father Tome Markoci.

A couple of years later, the grounds were dedicated by Father Gjan Pjer Ferrari. By 1902, the Franciscan mission had permission from the Sultan of the Ottoman Empire to build a church in Shkoder and the collection of alms began. The church itself and the assembly were designed by Friar Anslem and then enhanced by a French engineer called Augustin Briott. The building was finally completed in 1905.

But I wasn’t there to see the church, I was there to visit something that not many other people get to see.

I had an invitation to visit Gjergji Fishta’s library within the grounds of the Monastery. The library is adjacent to the church, and a well-worn pathway complete with broken tiles led me across a square lined with trees and flowers. A large wooden door with ‘Bibliotheca’ emblazoned across it stands firm, accompanied by a large window taking up almost the entirety of one wall.

I was met by a woman who prefers to remain nameless, with a warm smile and quiet voice. She ushered me inside, turning to warn me that I could take photos but only for my own private use, not for publication. As the room opened up before me, I was frustrated but respectful of her instruction as she explained that this space is very precious and private to the Franciscans.

As I looked around, the comforting, warm smell of books hit me. Somewhat dry and musty but almost sweet, I breathed it in deeply. The room was a peculiar shape, not rectangle or square, but made of four walls with no two angles the same. In one corner, a rickety spiral staircase wound up into the gallery above where large oak shelves rose to the ceiling, lined with books.

At ground level, the same oak shelving units, some engraved with female figures, flora, and other decorative designs. At the top of and below each shelf was a cupboard, locked with a key. In the middle of the room, there was an oak table surrounded by chairs, and behind it, a row of study desks, again made from oak and each with a small light perched on top.

A headless and battle-scarred stone statue, a motionless clock, and some busts with flaking paint adorned the few patches of wall that were not full of books. She told me that the bust of an angel was around 600 years old, and the headless statue, a victim of communism, was even older.

I sat at the table and was promptly informed that not only had this table belonged to Fishta, but he had studied at it as well. My guide also said that gaining access to the library was very difficult, and even clerical students had to undergo significant vetting and training before being allowed inside.

She explained to me that the library had been built and designed by Fishta and filled full of books telling the history of Albania, Catholicism in Albania, and also many of his own works. A theological library, it also dedicated space to history, science, poetry, and collections of periodicals and magazines of the time.

But in the early 40s when the communists tightened their chokehold on Albania, the Franciscans and the people of Shkodra knew bad times were coming. The violence and tyrannical abuse that was inflicted on these people knows no bounds. Priests, Catholics, and Muslims were tortured, persecuted, rounded up and imprisoned, and executed without trial or mercy.

After some years, the library was destroyed completely. Its windows and walls were smashed, its relics and artifacts destroyed, and its books burned. Thankfully, some priests who had foreseen what would come managed to stow away a fraction of the books and manuscripts.

I was presented with a stack of photographs showing the priests that had been killed during communism, simply for being priests. I also saw images of how the library looked after the communists had looted and pillaged it. Gaping holes in the walls laid bare and an interior that had been completely stripped of everything that was once kept there. Over the years, it was rebuilt bit by bit and restored to how it looked before.

Then, I asked what happened to the books that were hidden before the assault by the communists.

With a smile, my guide scaled a ladder and opened a cupboard that was fastened with a lock. She pulled out several books and papers and laid them down on the table. Handling each one gently, she explained their age and what their purpose was. The oldest book amongst them was written on animal-hide parchment and dated from at least 500 years ago.

Others included poetry written in old Gheg which included a mix of Latin and what appeared to be Greek letters. While I could make out certain words, it was completely alien in many ways.

Another treat was a small dictionary, slightly larger than a box of matches, containing translation between Albanian, Italian, and a Slavic language I couldn’t identify. This, my guide told me, was at least 100 years old.

After exploring much of the treasures that the library had to bear, the conversation turned to its maintenance and preservation. I was surprised that such precious books were in an environment with no AC or atmosphere control systems, and were instead stashed away in a wooden cupboard. Many of these books were also in a sad state of repair with crumpled, damp pages, and broken spines. My guide explained that most were in such a fragile condition, they couldn’t even be scanned electronically.

With no one qualified or able to restore them locally, the only option they have is to send them to Italy. But that costs a significant sum, something that is far beyond the Franciscan’s means, she said.

There is no doubt that investment needs to be made here to protect the books and restore those that need restoring. This library is a national treasure and even if it’s not made public, it deserves to be supported due to its dedication to preserving important parts of Albanian history. Furthermore, while Fishta is well regarded amongst those with a love for Albanian linguistics, history, and literature, he is largely ignored by the state.

These important bits of history have been saved from the ravages of government on one occasion already, it would be a shame to allow them to crumble into dust today.

Gjergj Fishta was an Albanian Franciscan priest, poet, teacher, politician, writer, and unofficial diplomat. Born on 23 October 1871 and dying in 1940, he is considered one of the most influential Albanian writers of the 20th century and is most famous for his epic masterpiece “Lahuta e Malcis” (The Highland Lute). He was also the editor of two of Albania’s most famous magazines, following the country’s independence; Posta e Shypnies and Hylli I Drite.

He was born in the village of Fishte in the Zadrima region of what is now Lezhe County, Albania, but was then a part of the Ottoman Empire. He attended the Franciscan school in Shkodra before attending the Troshan College in 1880. Young Fishta studied philosophy and in 1902 he was made the Head of the Franciscan college in Shkodra.

He wrote his main work, the “Lahuta e Malcis” while a student in monasteries in Austria-Hungary. The piece consisted of 30 cantos and 17,000 verses that focused on the League of Prizren which had become a key event in the Albanian national awakening.

During his political career, he supported Fan Noli’s dream of democracy but after the establishment of the King Zog regime, he went into voluntary exile in Italy.

He received several awards during his lifetime, including the Order of Franz Joseph by the Austro-Hungarian empire, the Benemerenza from the Holy See, the Order of the Phoenix by Greece,  and following the Italian invasion of Albania, he became a part of the Royal Academy of Italy.