Comment: How Many More People Need to Die on Albania’s Roads Before Something is Done? 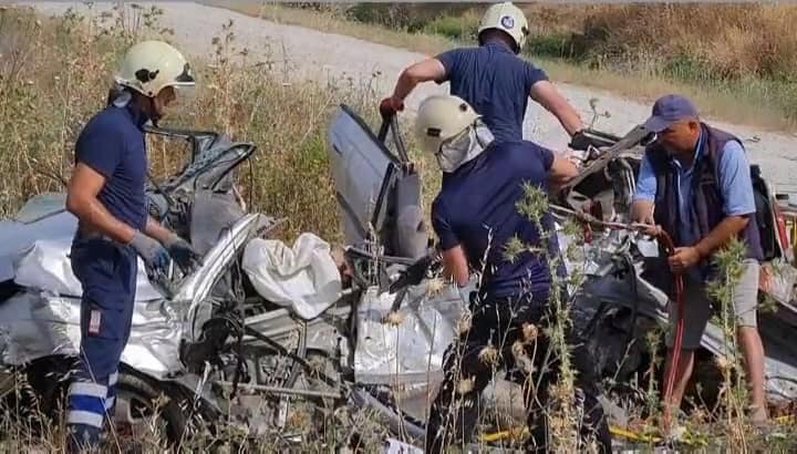 I’ve often joked about driving in Albania. I’ve said that a green light at a pedestrian crossing means pray and run and that it’s not your driving you need to worry about; it’s everyone else’s. But sadly, this is not a joking matter and it is, in fact, the truth.

Yesterday, a family traveling to Vlora for their summer holidays – husband, wife, and two young children, were killed. A flash car owned by a 21-year-old boy, driving at some 150 km/h, plowed into the back of the family’s vehicle and sent them careening off the road. The entire family was wiped out instantly, the car resembling a knot of metal, interspersed with beach towels and children’s clothing.

This is not the first, and it’s not the last unnecessary death on Albania’s roads.

I will be honest; I am scared as a passenger in Albania. Every time I get into our car and head off on some adventure, I worry that we will end up dead like this poor family. When we drive on main roads, I look out of the window and hope, trying to lose myself in the scenery to disperse the knot of anxiety in my chest.

Over the years, we have had several close calls. Young men racing expensive cars have cut us up; others have missed us by a hair’s breadth. No indicators, speeding, overtaking on the wrong side of the road, driving on the wrong side of the road, being aggressive, driving too close behind us at high speed, and even once, a taxi driver who drove 150 km/h to Fier with one (sometimes none) hand on the wheel, occasionally turning round to speak to us in the back.

It’s become such a regular occurrence; I am surprised when we have a car journey without a moment that makes my stomach end up in my mouth.

I also have to add that many people find my fear funny. The aforementioned taxi driver said not to worry as he was a great driver, family members have said I am obsessive because I don’t let my child travel without her properly installed car seat, and they snicker and roll their eyes when I speak of how anxious I get when we travel. But my fears are not unfounded and I cannot help but feel that if other people took road safety as seriously as I do, perhaps we wouldn’t be in such a situation.

But let’s look at the causes of this. I once mulled over getting my driving license and approached several driving schools. When asked for a quote for a course, one told me that I could pay a bit extra just to get the license in my hand. Another laughed at me when I said I wanted to do additional lessons to ensure I was fully confident and competent behind the wheel.

It’s no secret that many people can buy their license; many others do the minimum number of lessons and can have their license in hand within a month. Others never took lessons as, at the time, licenses weren’t required. Then when they were, they got them through a friend of a friend or by going for a coffee with the right person.

The road police are impotent and ineffective. They appear to spend a lot of their time chatting and smoking with their colleagues. Earlier this month, my friend was pulled over for not having their lights on in daylight. Meanwhile, a blacked-out four-wheel drive sped past at over 100km/h, and they didn’t bat an eyelid. I’ve witnessed them turn a blind eye to speeding many times, particularly if it’s a fancy car.

I believe that the Ministry of the Interior, responsible for the police, is directly answerable for the high numbers of deaths on Albania’s roads. The road police are there to enforce rules, not be corrupted, and not turn a blind eye because the offender is the son/cousin/friend of someone important and influential. It is their job to keep the roads safe, but this is just not happening, as the statistics show.

The government has half-heartedly attempted to introduce measures to combat the dangers. In October 2020, they announced they planned to have zero victims of road traffic accidents by 2050. They said the police would be asked to focus on apprehending those that use their mobiles and drive, those not wearing seatbelts, people who drink and drive, and of course, speeding.

But since then, the number of accidents and fatalities actually increased. No more has been heard about the zero victims plan. Meanwhile, people continue to die on the country’s roads.

According to data from 2018, road traffic accidents are the 9th leading cause of death in the country. Over the course of a year, one person will die every day on Albanian roads. Data from the National Emergency department show that every day, there are up to 106 accidents per day.

In May alone, there was a 60% increase in the number of accidents reported. In the first five months of the year, 90 people lost their lives, with 20 being killed in May alone. A further 714 people were injured between January and the end of May.

Out of these, 84.2% of cases were the fault of the driver, and those most likely to cause an accident were aged between 25-34.

Overall, Albania’s death rate from car accidents is a staggering 12.77 per 100,000 of the population. Let that sink in.

So what about that boy who wiped a family of four off the face of the earth? What will happen to him? The law states he could receive between five and 20 years, but in reality, he will likely walk away with a slap on the wrist as a first-time offender and due to his age.

But who else is responsible? I assume his father bought him his car, a powerful Audi worth tens of thousands of Euros. There is absolutely no reason for an inexperienced boy, barely an adult should be driving such a vehicle. I think there should be rules in place for what kind of cars young and inexperienced drivers can drive. Secondly, the two passengers in the car with him, both young men, should also face a portion of the blame. Whether it was distracting the driver or egging him on, they should face the consequences for their part.

Thirdly, we need a reform of the laws that govern the roads. There need to be proper deterrents in place; severe license suspensions, driving bans, seizure of vehicles, bans on young or inexperienced drivers having powerful cars, criminal records for reckless driving, hefty non-negotiable fines, and zero tolerance for violations. The licensing process needs to be overhauled. It shouldn’t be possible to get a license within a month. It should require a high minimum number of practice hours, a tougher test, and more intensive theory. Drivers should also be shown the consequences of speeding and reckless driving, including hearing testimonies of people who have lost their families—the more graphic, the better, in my opinion.

Lastly, the people who we pay to keep the roads safe should do their job. Apprehend drivers, don’t accept bribes or connections as a get out of jail card,  and enforce the law to the maximum degree. Because let’s remember, this sad, sad story and these terrifying statistics could be any of us next time.