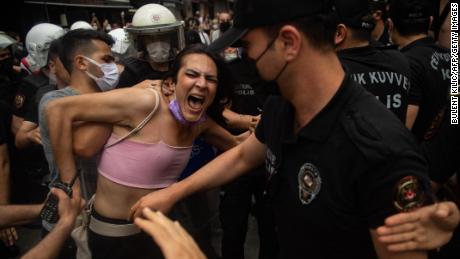 Police in Turkey forcibly dispersed an LGBTIQ Pride Rally that took place in Istanbul on Sunday.

The authorities had refused to issue a permit for the event, citing “protection of public peace, security, general health, and morality.”

Those taking part in the event in Taksim Square said the police fired rubber bullets into the crowd, arrested and beat up a journalist, and detained some 20 other people. Others reported the use of tear gas to disperse the revelers.

Pride marches and rallies have been banned in Turkey since 2014 amid an intensifying crackdown on the LGBTIQ community and general erosion of human rights.

Earlier his year, President Recep Tayyip Erdogan appointed a new rector to an esteemed Istanbul University, Bogazici University. Students and faculty staff complained over the appointment, which is the first state appointment in decades. They argued he was unqualified and nothing more than a political appointee.

In the protests that followed, the government branded the students as “terrorists” and targeted the university’s LGBTIQ students, calling them instigators of unrest and deviants who violate Turkish values.

“There is no such thing as LGBT. This country is national, spiritual, and walking toward the future with these values,” Erdogan said at the time.

Students had their homes raided and were manhandled by police officers.

Also, this year, Turkey withdrew from the Istanbul Convention, which seeks to protect women and girls from violence and sexual abuse and provides protection to members of the LGBTIQ community.

The government argues that it already has legislation protecting the rights of these categories and that the Convention legitimized the rights of LGBT people.

At the end of last week, before the march, Human Rights Commissioner at the Council of Europe, Dunja Mijatovic, wrote to Turkey’s Minister of Justice Abdulhamit Gul and Minister of the Interior Suleyman Solyu to draw attention to “some concerns pertaining to the human rights of lesbian, gay, bisexual, transgender, and intersex people” in the country.

She spoke about the upcoming Pride march and the fact that previously, the community has been prevented from exercising their right to peaceful assembly due to “sweeping restrictions on LGBTIQ events.”

She reminded the Ministers that under the European Convention on Human Rights, authorities have an obligation to ensure that LGBTIQ people can enjoy their rights as equal members of society. Mijatovic urged them to ensure that events are allowed to take place and that participants remain safe.

The Commissioner also called out the country for criminal investigations against LGBTIQ people, the use of hate speech and homophobic language by religious leaders and government officials, and the ill-treatment of protestors.

“I am concerned about the visible rise in hateful rhetoric and the propagation of homophobic narratives by some politicians and opinion-makers in Turkey, including high ranking central government and public officials. Portraying LGBTI people as a “threat to family values, religion or the traditions of the nation,” “perverts,” or as “attempt[ing] to undermine the humankind, its nature and the family” are only a few examples of this language.”

Mijatovic also noted that Turkey has the highest rate of transgender murders in Europe. She called for lack of impunity for such crimes and to reverse all the negative trends of discrimination in the country.

Unfortunately, her calls for action fell on deaf ears.

A recent report from Memory Centre Berlin noted that Turkey’s behavior is being copied by other authoritarian leaders in Europe, such as Hungary and Poland.

“Turkey and Poland have recently come to the fore in European politics and attracted international attention with their striking parallels in terms of authoritarian, populist, and undemocratic regimes,” the report, entitled “The Istanbul Convention, Gender Politics and Beyond: Poland and Turkey”, said.

It noted that the government in Turkey, which is completely male-dominated, appears to have influenced Poland to adopt similar policies that target minorities, women, and LGBTIQ. This is accompanied by a religious and conservative rhetoric, attacks on the media, and a lack of interest in the rule of law.

In Hungary and Turkey, violence and discrimination against the LGBTIQ community and women are big issues, and in Poland, abortion has also become a hot topic. Poland and Turkey reject the Istanbul Convention; the main issue is the term “gender”. These governments say it threatens societal values, targets the family, deteriorates morals, and promotes LGBTIQ identities.

They believe that their domestic law is sufficient to combat violence, despite statistics saying otherwise.

The report concluded that “In a time when coming together is either dangerous or banned, and activism is clearly hit by the pandemic, women’s and LGBTI+ street protests still continue, taking their cue from the slogan ‘masculinity is more harmful than COVID’.”