Footage has emerged on social media of an older woman being confronted by Municipal Police in Tirana.

The woman was selling fruit and vegetables in a cart by the side of the road when the police approached her, upturned the cart, and threw the produce over the floor. She picked up the cart and shouted at the police, “what are you doing” with all her products strewn around her.

Videos and photographs were taken by multiple citizens and uploaded to social media.

Under Albanian law, it’s not permitted to sell items by the side of the road. Despite this, many farmers or individuals on low or no income take to side streets to sell fresh produce. They make a modest income to support their families, selling figs, tomatoes, herbs, and beans.

This is not the first time the Municipal Police have been caught using excessive force when asking vendors to move on. There have been multiple documented cases of them seizing products, destroying them, and maltreating vendors.

Many fines have also been placed on these individuals, most of whom do not earn enough money to cover their basic living expenses, let alone penalties. Between 2017 and 2018, some 21,000 fines were handed down to street vendors ranging from 500 leks (EUR 4) to 5000 leks (EUR 40).

Furthermore, the seizure of goods by Municipal Police can only be done by the tax administration after completing a lengthy administrative procedure. 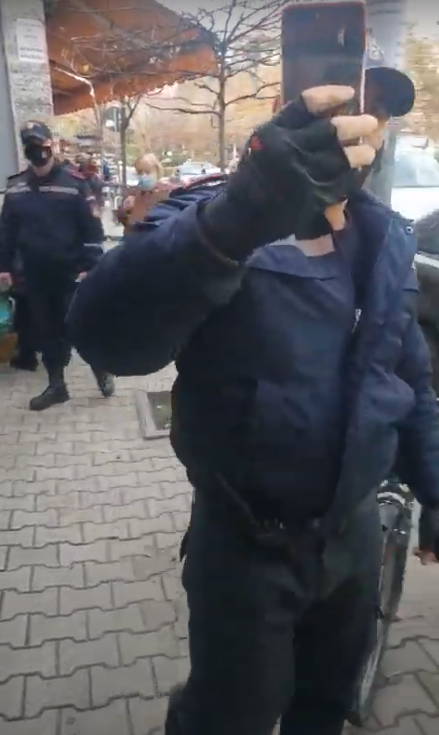 Earlier this year, an Exit journalist filmed Municipal Police asking a vendor to move on in the Ali Demi part of the city. Despite identifying herself as a journalist, they approached her, put their phone in her face to film her, and tried to remove her from the vicinity. After she left the scene, they followed her for 1km to her home, further intimidating her.

Mayor of Tirana Erion Veliaj had promised to construct modern produce markets throughout the entire city. The idea was to reduce the number of street vendors by providing them with a centralized and regulated space to sell their produce. The Municipality said vendors must move to the new premises to sell their products in return for rent and taxes.

Unfortunately, the markets have not materialized. Some have been built and remain half empty and others are yet to be constructed. Many small vendors are unable to afford the rent and taxes necessary to sell in the available spaces.

During the campaign for the local elections in 2015, Erion Veliaj revealed that when he was young, he had sold figs at the New Bazaar to provide income. He has repeated this claim on multiple occasions as an attempt to seem relatable to the electorate. Yet, his police force has waged war on the very same people he claims to have been like.

The Municipal Police have had several other high-profile scandals in recent times. In 2019, a Municipal Police officer punched a pregnant woman in Laprake. She was opposing the illegal seizure and attempted shut down of her family business, prior to him assaulting her. No action has been taken against the police officer, and instead, charges have been filed against the woman who received medical care for her injuries.

In June of this year, the Tirana Municipal Police were found guilty of discrimination due to race, ethnicity, and economic status against Agron Cura, a member of the Egyptian Albanian community.

On March 3, 2020, Cura was stopped by the Municipal Police, who “violently seized” his three-wheeled bike and the items inside it. Cura had been collecting items such as gypsum and other recyclables to sell to support himself and his family. Cura filed charges against the Police and received damages and a ruling in his favor.