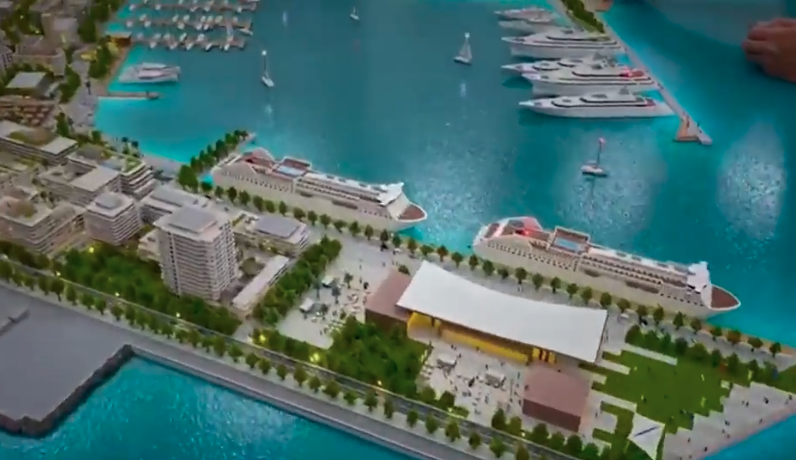 Prime Minister Edi Rama has published a video, complete with an upbeat soundtrack, of what the finished Port of Durres will look like.

Via his Facebook page, Rama noted that it will be one of the largest and most beautiful tourist ports in the Mediterranean.

He added that the studio of the Dubai-based Emaar Group has successfully completed the urban plan and works are expected to start soon.

An Agreement for Economic Cooperation was signed between the two countries on November 26, 2020 by Prime Minister Edi Rama and it was ratified in Parliament just seven days later.

The value of the project is said to be some EUR 2 billion. The Group behind the deal is the same that built the Burj Khalifa and the Dubai Mall. Emaar brought in more than $6.9 billion in 2018. It’s owned by Mohammed Alabbar and Symphony Invest is managed by his son Rashid.

The opposition Democratic Party claimed that the deal violated the EU Stabilisation and Association Agreement because it prevents any EU or Albanian company from having the opportunity to bid for the project.

The EU said they were looking into the matter but no further information was given.

Meanwhile, a concession for Pier 6 of the port was awarded to Hili Company from Malta for a period of five years. The concession has a value of EUR 6 million.

Exit revealed a somewhat chequered past regarding some of the individuals involved in the concession. This involved police investigations, money laundering probes, fines, oil scandals, and allegations of kickbacks.

Hili Company denied any of the findings, despite the information being readily available in court records, media reports, and company directories.

In terms of the Emaar deal, senior officials from the Albanian government including Deputy Mayor of Tirana Arbjan Mazniku, Director of Communications Endri Fuga and his wife, Minister of Reconstruction Ahmetaj, and Minister of Infrastructure Belinda Balluku, and businessman Saimir Mane all traveled to Dubai to supposedly meet with the investors. They were pictured, sans investors, enjoying a meal at one of Dubai’s most expensive restaurants Nusr-Et. Top Channel journalist and political correspondent Muhamed Veliu was also in Dubai to report on the meetings.

Mazniku, who himself was accused of accepting luxury hotel stays in Spain at the expense of developer Fusha Shpk, defended the delegation’s trip. He said they visited Dubai to bring the Arab company EMAAR to the Durres Port Project.

“We went as a part of a government attempt to bring Albania an investor called EMAAR Group. It’s one of the interested parties for the revitalization of the Durres Port. We are talking of an investment that exceeds EUR 2 billion,” he told Syri TV.

When asked if this could be seen as a conflict of interest, he denied it was the case and said that officials should do all they can to bring investors to Albania.

“All possible legal means must be used to entice investors to come to Albania.”

Faktoje, an independent fact-checking portal made repeated requests to the government for the expenses of the trip and the invitation from the investors, but were denied.