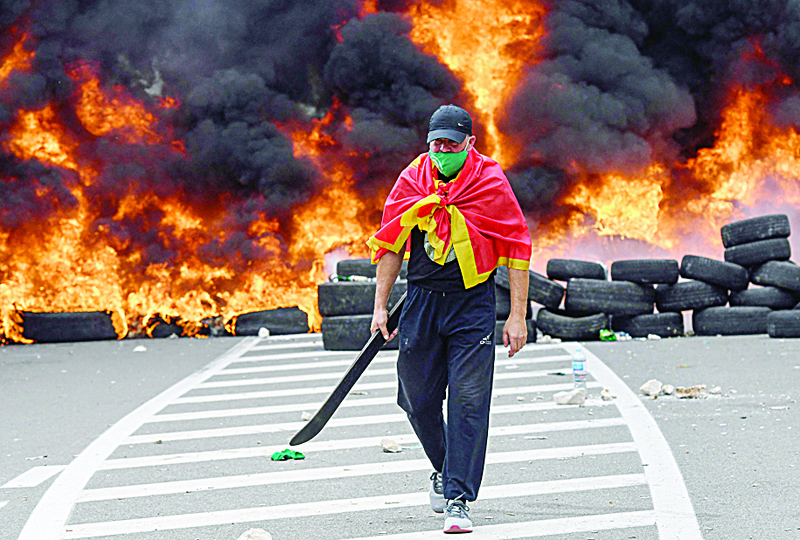 On Sunday, the Serbian Orthodox Church (SOC) in Montenegro inaugurated the new Metropolitan of Montenegro amidst protests dispersed with tear gas by police.

Bishop Joanikile II, who later was anointed as the new leader of the church, arrived at the historic monastery of the town of Cetinje together with Serbia’s Patriarch Porfirije, following the blocking of roads by hundreds of protesters, RFE reported.

Protestors maintain that the inauguration of the head of the Serbian church in Montenegro’s former and historic capital, Cetinje, was an insult to Montenegrins and their national identity. They demanded the ceremony be held in any other city.

They set up road barriers and prevented the church leaders from traveling to the monastery. They shouted “This is Montenegro!” and “This is not Serbia!”, state RTCG TV reported. Police later used tear gas and fired gunshots in the air to dismiss them.

Montenegrins have been trying unsuccessfully to separate their orthodox church from the SOC since the political federation between the two countries ended in 2006.

Roughly 30 percent of the population in the country identify as Serbs, while a number of parties comprising the current majority and government are pro-Serb and pro-Russian.

The SOC and these parties, then in opposition, held nationwide protests against the government last year, following attempts to pass a law that would require the SOC to prove ownership of its properties dating before 1918.

The pro-Western government of Montenegro lost the following elections. The mainly pro-Serb and pro-Russian parties then were able to secure a majority through a coalition with the United Reform Action party of Dritan Abazovic, who unlike the rest of the coalition, maintains a pro-Western approach in policies.

Prime Minister Zdravko Krivokapic supported the inauguration of the metropolitan in Cetinje, and condemned the opposition for organizing the protest and for planning “terrorist acts.”

Protests were attended by members of organizations demanding the separation of the two churches, opposition and Cetinje local administration. They consider the inauguration as part of the Serbian government’s policy to unify all Serbs in one state – the so-called “Serbian World”.

The former head of the SOC in Montenegro, Patriarch Amfilohije, a controversial figure, died in October 2020 after contracting COVID-19.