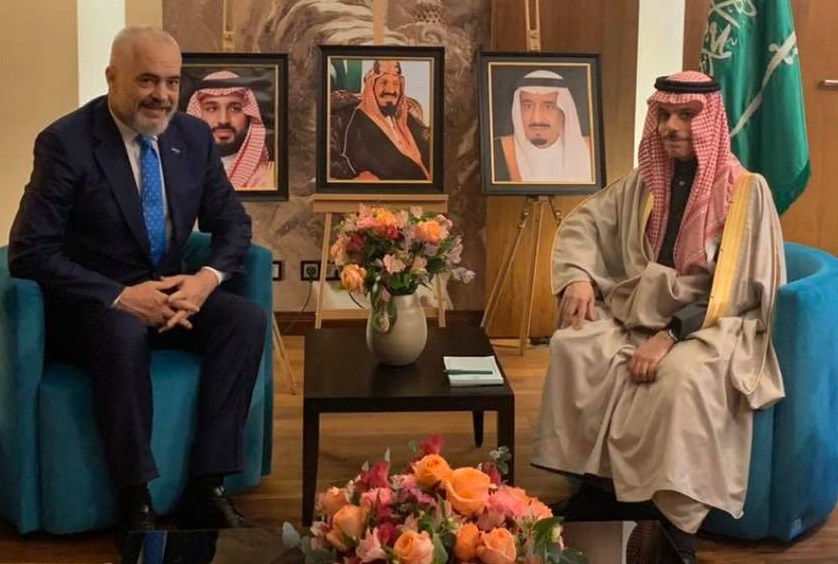 At a joint conference, Rama said the parties had agreed to create a Joint Committee to strengthen economic co-operation between the two countries.

He added that he hoped Albania would join Saudi Arabia’s green initiative, which seeks to contribute to the climate agenda by planting about 50 billion trees globally.

According to Rama, he would work with Prince Al-Saud “to increase awareness and clarity among those countries of the Organization of Islamic Cooperation and the Arab League that have not yet recognized Kosovo.”

While Prince Faisal bin Farhan Al-Saud did not comment on the Rama’s request to join the Arab Green Initiative, he promised to support Albania during its tenure at the Security Council of the United Nations.

In June of this year, the Albanian government received about 30 million euros in loans from the Development Fund of Saudi Arabia for the improvement and construction of a 10 km tunnel near Vlora.

A month ago, Saudi Arabia donated medical equipment to Albania, including 23 ventilators, to help manage the pandemic.

At the beginning of the year, the Albanian government was criticized after pictures of Albanian officials having  dinner at an expensive steakhouse in Dubai were published on social media. Rama claimed that they were invited by the Arab side.

He clarified that the dinner was held to attract investors, despite the fact that such a dinner would constitute a conflict of interest. Also, Rama filed to clarify the role of businessman Samir Mane, who was also present at the dinner in question.

According to reports by local media, the Albanian officials who visited Dubai did so at the invitation of the Emaar business group. This group has undertaken to build 2,000 apartments in Durrës, as part of the city’s post-earthquake rebuilding process. They are also involved in the reconstruction of a section of the port of Durrës.