Exit at Fazana Media Festival: The Need for Reliable, Independent Journalism is More Crucial than Ever 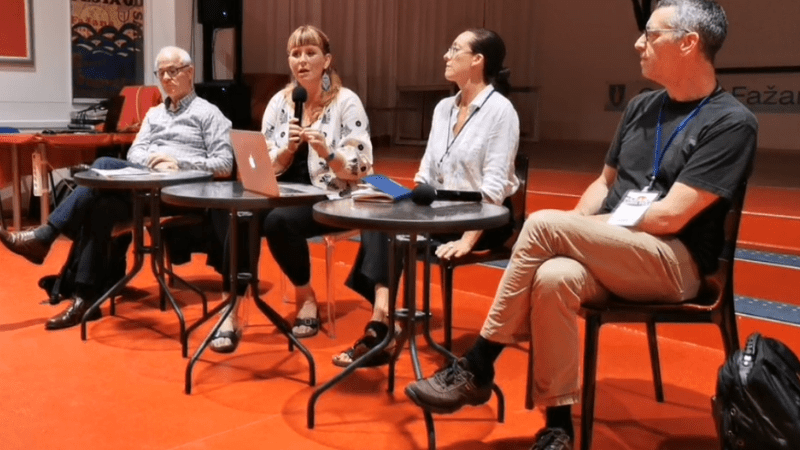 During a crisis such as earthquakes and pandemics, ethical and reliable media is a matter of life or death. This was the message conveyed by panelists, including Exit co-editor Alice Taylor at the Fazana Media Fest in Croatia.

Exit News was the first Albanian media to participate in the week-long festival that brought together some of the most prestigious independent and investigative portals in the region. Media academics and scholars, and those involved in media institutes and NGOs also participated.

​​The event is organized by the Centre for Investigative Journalism, the Municipality of Fazana, and the Tourist Board of Fazana. The main partner of the festival is the Office of the European Parliament in Croatia.

They discussed the Journalism Trust Initiative, which Exit was the first in Albania and the Balkans and one of the first globally to complete.

The process involved completing a self-assessment in an ISO-style format. This included evidence of meeting standards relating to editorial guidelines, transparency, ownership, structure, funding sources, revenue, hiring policies, fact-checking policies, and accountability. These criteria were drawn up by over 100 global media organizations, universities, and specialists in the field.

The second stage of the process was to publish this information publicly for anyone that wishes to view it. You can see the document here. Exit is also having the answers submitted, audited by Deloitte. The results will also be published once the process is complete.

The project aims to support quality journalism in the fight against disinformation, strengthen self-regulation mechanisms to ensure professional standards in media, and pilot Media and Information Literacy (MIL) projects to enhance critical thinking in the region.

On the topic of the importance of reliable news, Taylor said;

“Access to independent and accurate media has become even more crucial in the last 18 months. The problem is that people are losing trust in the media. After the Albanian earthquake in 2019, fake news was everywhere. Portals were predicting Armageddon-type aftershocks and people slept outside for days in fear.”

Then turning to the COVID-19 pandemic and the issue of widespread misinformation, she added: “Then came the covid pandemic. The government’s grip on information has been so tight that some portals have resorted to speculation or outright misinformation. Others have struggled to find answers. This is a life and death matter in many ways. We have one of the lowest Covid-19 vaccination rates, 22% in the region. People don’t trust the facts. They cant distinguish the facts. It’s a potentially deadly situation.”

White spoke of the issues faced by journalists exposing corruption and organized crime, referring, among other things, to how he perceived a sense of fatigue and exhaustion among journalists facing overwhelming odds.

“In some situations, you can be a good journalist, report freely, challenge authority, expose corruption and have a chance of ending up in jail. Many journalists have been to jail because of that,” White said.

“However, there’s a whole layer of people working in journalism building alternatives, keeping faith with notions of decent moral behavior in journalism and ethics, and they are courageous in the way they are doing this,” White continued.

“That is why I always shy away from the pessimism that very often, I fear, overwhelms people. There’s so much that can be done,” he added.

Cecen concluded by stating that “As long as there is one person that cares, ethical and professional journalism has reason to exist.”