Merkel Defends Her Achievements in the Western Balkans during Albania Visit 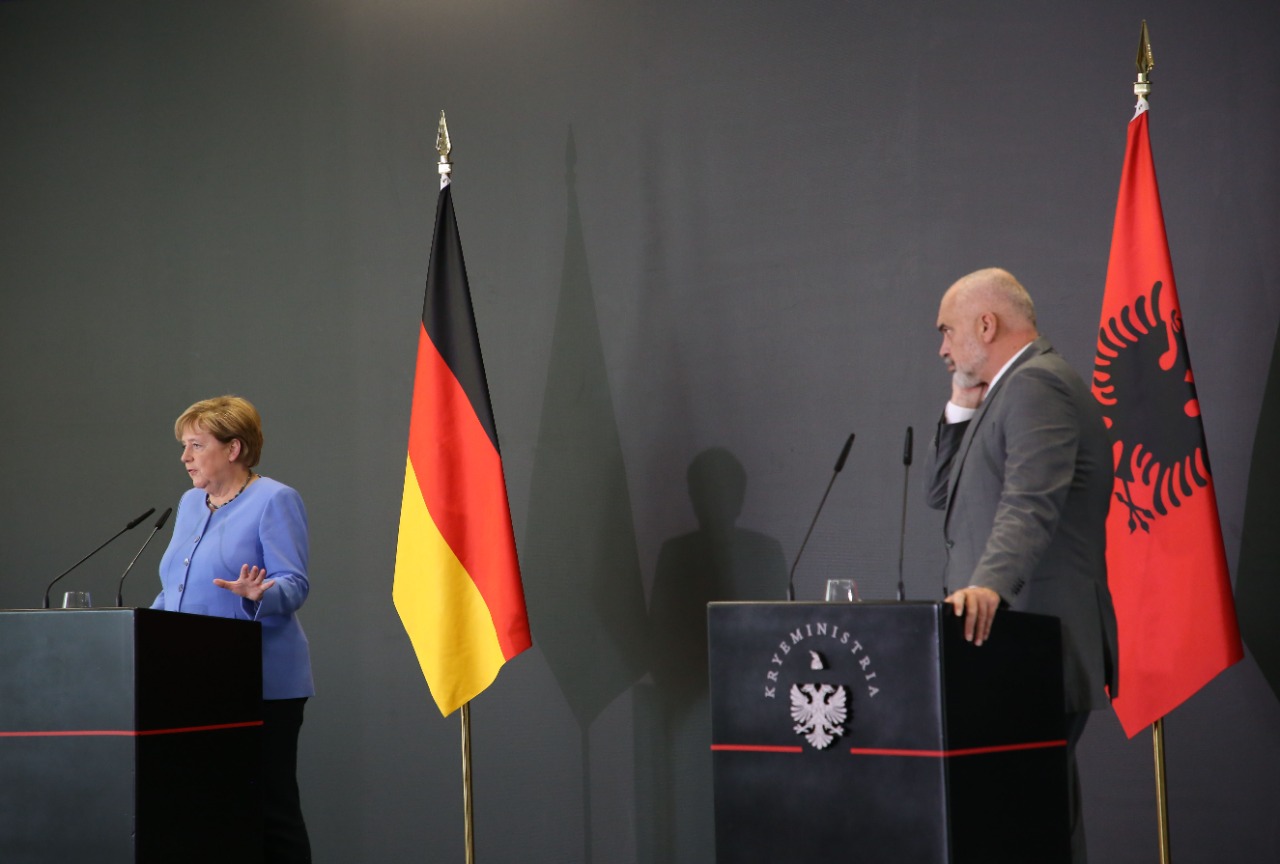 German Chancellor Angela Merkel defended the achievements of the Berlin Process during a visit to Tirana, in one of her last tours abroad before she leaves office this Fall.

Merkel visited Serbia on Monday, while today she was hosted in Tirana by Albanian Prime Minister Edi Rama. Bilateral meetings between the Chancellor and the leaders of other Western Balkan (WB) countries – Bosnia and Herzegovina, Kosovo, Montenegro, and North Macedonia – also took place in Tirana today.

In a press conference with Rama, Merkel refuted a journalist’s suggestion that the Berlin Process, initiated by her in 2014, might be considered a failure.

She stressed the main achievements of the initiative: meetings between leaders in the WB have become more common and are seen as normal, several infrastructure projects have started, including a highway connecting Kosovo with Serbia that will begin construction soon, youth and scholar exchanges and cooperation among civil societies in the region has increased.

The Berlin Process was launched in 2014 as a platform to assure higher integration within the WB, as EU enlargement itself had stalled. Its aim was to keep WB countries at the EU’s bay, ensure their respective reforms are implemented, and maintain high-level contacts between WB and EU leaders.

Merkel also praised the political agreement of November 2020 between the six WB countries to create a Common Regional Market (CRM), and urged all countries to increase efforts to implement it.

Rama jumped in to praise Merkel’s work for the WB, adding that not only was the Berlin Process a success, but that thanks to it, the countries of the regions have learned how to build up their own initiatives.

The “Berlin Process is not a failure” but a “long-term vision” which will continue after Merkel, although her political energy will be irreplaceable, according to Rama.

The Albanian leader highlighted the Open Balkan initiative as one of the achievements of the Berlin Process.

Open Balkan – also known as “Mini-Schengen” – was officially launched by Albania, Serbia and North Macedonia in 2019 as an initiative aiming to create a common regional market in the Balkans. The other three regional countries – Bosnia, Kosovo and Montenegro have refused to join.

Rama slammed Kosovo leadership during the press conference with Merkel, accusing them of engaging in “conspiracy theories regarding “Open Balkan.” Kosovo Prime Minister Albin Kurti has refused to join the initiative, arguing that it is redundant, given the Common Regional Market agreed under the Berlin Process; it has no vision for the region’s relation with the EU; and its creation was not consulted with all six countries.

The Albanian leader stressed that his initiative was a result of the Berlin Process, and it marked the region’s tendency to take matters into their own hands instead of waiting for Brussels to do the job.

Merkel confirmed that the Berlin Process will be continued, and that other regional initiatives within it are welcome but cannot replace it.

On his part, Rama stressed that rumors that the Open Balkan is pushed forward by third parties (namely by Russia), or that the Berlin Process was created to keep the region out of the European Union are blatant lies.

Speaking of the start of accession talks between the EU and Albania and North Macedonia, which were blocked by Bulgaria, Rama said the far right is influencing politicians in Europe and the two countries were hostage to nationalism within the EU.

Merkel confirmed her view that Albania and North Macedonia have met all requirements and that the EU should deliver on its promise for talks to start.