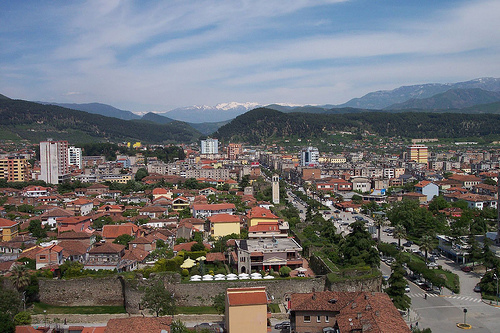 According to Albanian human rights organizations, schools in Elbasan are segregated, leaving children from Roma and Egyptian communities unable to access education.

These communities, which remain the most marginalized and discriminated against in the country, face significant obstacles concerning the new electronic registration system. Under the new process, students can enrol in the public educational institution with a catchment area, including their place of residence.

This is decided using a map prepared by the municipality.  In cases where a school has additional capacity, they can accept students from outside the catchment area.

An open letter sent to the Ministry of Education, NGOs including the Egyptian Roma Youth Movement (LRER) in Elbasan, claimed that many schools, especially those with better infrastructure, filled up quickly with students. In addition to not filling up classes, those with worse facilities had enrolled predominantly Roma and Egyptian students, thus creating segregated schools.

The Ministry admitted that there were problems with the enrollment system, including some roads not being included in the territory map, issues with registration, and other matters related to the place of residence, resulting in parents having to register the children outside of their area of the home.

They added they considered requests to enrol students in schools not in their catchment area for cases such as where the address has changed if the student has siblings in that school and where parents are divorced and have different addresses.

According to LRER, several schools in the area, including “Sule Misiri,” “Ptolomee Xhuvani,” and “Hamit Mullisi,” are now “Roma and Egyptian schools” in practice. Some classes in these schools are made up entirely of students from these groups.

The Ministry denied that deliberate segregation is taking place.

Data analyzed by BIRN showed that 70% of students enrolled in Grade 1 in schools with good infrastructure in Elbasan are outside their area of residence.

The new system pioneered vi eAlbania was not a success. Many parents reported not getting confirmation after registering or not finding a school near their address. Furthermore, it must be conducted online, excludes those who don’t have access to a mobile, the internet, or another kind of device.

Some 153,000 families in the country do not have internet access, meaning they would find it challenging to register their children online for a right to which they are entitled. This issue disproportionately impacts low-income families and members of the Roma and Egyptian communities.

The Albanian Ombudsman is currently looking into the issue.