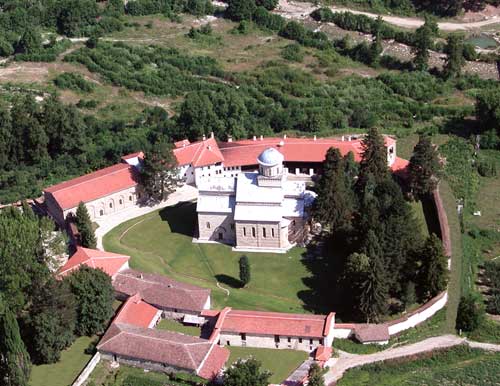 Viola von Cramon, the European Parliament rapporteur on Kosovo, has called on the government to return its land to the Serbian Orthodox Christian monastery in Deçan, as ruled by the Constitutional Court in 2016.

Following a visit to the Deçan medieval monastery on Sunday, the EP member stressed the need for Serbian Orthodox Church heritage in Kosovo to be protected, as one of the elements preserving a multiethnic society in the country.

“I thus urge Kosovo government to implement the long overdue Constitutional Court judgment as the rule of law means equal treatment of all,” she stated on Twitter, also calling on the monastery clergy to play a constructive role in the dialogue between Serbs and Albanians in Kosovo.

In 2016, a Constitutional Court ruling recognized that the monastery owns 24 hectares of land in its vicinity. However, the Deçan municipality has refused to implement the ruling, claiming it should be reviewed as it was granted on political grounds to appease Serbia.

Since the court ruling, the town’s two successive mayors have maintained that the land awarded to the monastery is an indispensable resource for the people of the town and shouldn’t be taken away from them.

Last year, local authorities started to construct a road on the monastery land, prompting Serbia and Western diplomats to call on Prishtina to stop the project. The central government suspended the construction as a result.

In May this year, monastery authorities refused a visit by Kosovo Prime Minister Albin Kurti, although the decision not to comply with the court ruling was taken by local authorities.

MEP Von Cramon’s call was supported by the German embassy in Prishtina on Monday.