Comment: Rama’s Speech at COP26 Has as Many Holes as the Ozone Layer 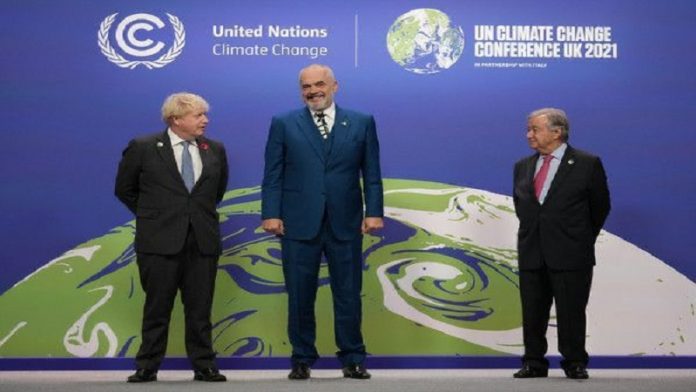 Prime Minister Edi Rama spoke at the COP26 summit in Glasgow on Tuesday (2 November) and made several claims in his speech. Unfortunately, not all of them stand up to scrutiny.

While addressing world leaders and climate activism stakeholders, Rama claimed that Albania is a non-polluting country.

If we take Rama’s words that Albania does not pollute, one can quickly prove him wrong. Albania does not recycle any meaningful amount of waste. Instead, it goes into landfills and over the coming years, more will be burnt in incinerators the country doesn’t need, and no one asked for.

Tirana is 4th Biggest Contributor of Waste Plastic to the Mediterranean

Furthermore, Tirana is one of the top four most significant contributors of plastic waste to the Mediterranean Sea, and it doesn’t even sit on the coast. The situation is so bad that Croatia, a country dedicated to preserving its beach and natural environment, has stepped in to help as rubbish from Albania is ending up on its shores.

We must also consider air quality. Tirana is often featured as one of the cities in Europe with the worst level of air pollution.  In fact, Albanians have one of the highest risks of premature death due to air quality in Europe. Combine this with the fact tap water is undrinkable, and one finds it hard to understand how Rama can claim Albania is not polluted.

Rama would do well to remember that the air we breathe and the water we use, does not merely stop at Albania’s borders. Therefore, we can say with certainty that Albania does in fact pollute.

Furthermore, the hydropower that Albania produces cannot be considered green or sustainable. Asides from displacing communities and destroying the environment, the HPPs only produce power for a few months a year, mainly in spring and early summer. The Albanian government cannot store the energy generated, so it sells it to other countries. Then when autumn and winter comes, it buys back fossil fuel and sells it to consumers at a higher rate.

In his speech at COP26, Rama acknowledged Albania imports pollution, and he called on other states to do something about it.

“How long will we have to be the first to pay the price for your contribution to climate change, and further, for your failure to rectify its consequences?” he asked.

He acknowledged that this years lack of rainfall had meant reduced amounts of hydropower energy. Experts have raised this issue several times over the years who warned the government to avoid investing in HPP due to climate change. Despite this, the government has continued giving permits for more power plants.

While I did enjoy the way Rama called larger nations to task, and I must admit this was one of his more articulate speeches, painting Albania as a green and sustainable utopia, is not only disingenuous, but it is completely false.