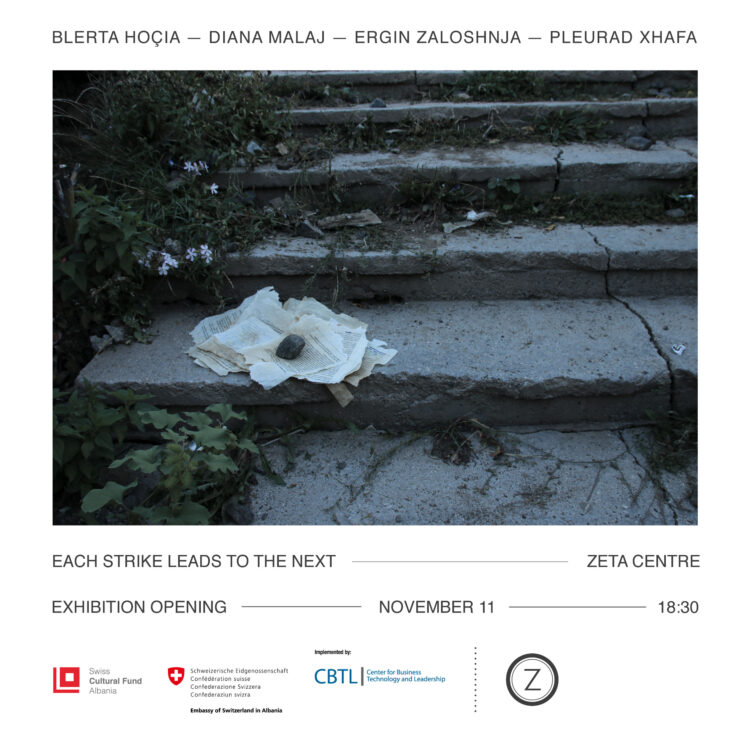 A new art exhibition focussing on the plight of miners in Bulqize, in the north of Albania is set to open at 18:30 on Thursday, November 11, at Zeta Gallery, Tirana.

“Each Strike Leads to the Next” is a collaboration between artists Blerta Hoçia, Diana Malaj, Pleurad Xhafa, and Ergin Zaloshnja. It is curated by academic and Exit co-founder Vincent W.J. Van Gerven Oei.

His text on the project, reads as follows:

Like a massive silver-grey tongue licking the inside of the mountain, the chrome deposits of Bulqiza have tempted successive Albanian regimes to exploit its riches. While during the communist period, prisoners were forced to work the mine shafts and wells diving deep into the earth’s crust, the still ongoing transition to democracy has brought the worst excesses of neoliberal capitalism to the region. Dozens of companies – not only owned by oligarchs such as Samir Mane, but also members of parliament, mayors, prosecutors, and their family – compete in a literal race to the bottom, beyond accountability and government control, without properly enforced security protocols, without even properly paying their employees, the miners of Bulqiza. The latter see nothing of the riches that they bring to the surface every day, as their region is invisible to those that hold power, except in the brief windows of election time.

Nothing of the riches, but all of the burdens. On September 20, 2021, the lifeless body of 60-year-old miner Muharrem Plaku was recovered from Gallery no. 3. An experienced miner, he slowly suffocated to death for five days until he was found. Despite the impotent words of chrome mine operator and Bulqiza mayor Lefter Alla to bring Plaku out alive, the absence of a professional search and rescue team meant that there was little hope from the beginning. Although an investigation was started against the company operating the gallery, Kadurtex sh.p.k., the story had already been written: individual responsibility, not following safety protocols; the company is never to blame. Down in the village, the enforcers of the major operators moved menacingly through the streets, monitoring any lingering sense of resistance or protest, their polished, black Mercedeses starkly contrasting with the grey-dusted housing blocks.

In such a situation, how is it possible to make art? This was the difficult question that Blerta Hoçia, Diana Malaj, Pleurad Xhafa, and Ergin Zaloshnja were faced with as they arrived in Bulqiza, less than 24 hours after Plaku’s death. Their answer to this question has an importance that goes beyond its immediate relevance to the context of Bulqiza.

First, it was their decision to collectivize. Abandoning their individual practices as artist in public space, designer, photographer, curator, or social activist (it is irrelevant who was what), they decided to produce work collectively. This gesture is meaningful in a place where miners have struggled to formulate collective demands and organize in a union that truly represents their interests, rather than being an extension of the oligarchic, political class that dominates the mines, a class that demands “absolute peace.” A new union, founded some years back had to operate under constant threats of the mining companies and the Rama government, which prides itself in the “absence of unions” on Albanian territory.

Second, the artists decided to offer a channel to a possible faithfulness. Faithfulness, according to the French philosopher Alain Badiou, is the subjective process through which the truth of an event is recalled and reenacted across time and space. The event, in this case, is the successful resistance of miners around the world against the dehumanizing forces of democratic materialism, in which the only relations are power relations. This is already precisely articulated in the title of the work, “Each Strike Leads to the Next.”

In their work, the artists read off a list of successful miner strikes across the world, and the contexts in which these strikes happened – contexts of corruption and repression very close to the one in Bulqiza. The list is printed on the paper wraps of the dynamite used to blow up the mountain. The text they contain is explosive. Reading through the chronological list on four consecutive mornings, we witness also the gradual vanishing of the figure of the artist. In the video of the first day, we see Malaj arriving and reading the text facing the camera. The videos of the second and third day, featuring Zaloshnja and Hoçia respectively, feature the artists at an oblique angle, while on the video of the fourth and final morning, Xhafa is initially invisible as the miners file up the mountain while looking straight into the camera. A second shot shows him against the background of the Bulqiza valley, whereas the third shot cuts back to the miners walking toward the camera, Xhafa descending the mountain on the background. What is remarkable in this series of videos is both the gradual acknowledgment of the presence of the artists by the workers across the four mornings, but also the  displacement of the artists by the workers as subject of the videos. As if, indeed, some of the borders between artist and miner were erased.

We should not make the mistake to call this work “inspirational.” The words spoken by the artists did not inspire any strike, nor did they light any flame of resistance. Nor should we consider the difficulties faced by the few Albanian artists that wish to raise their voice against the criminal usurpation of the public sphere by a small and powerful minority as comparable to the physical hardships faced by those who risk their lives every day inside the mountain. To reuse a perhaps antiquated term, “Each Strike Leads to the Next” is a socialist realist work, in that it portrays the lived reality of the miners of Bulqiza while also recalling its inherently revolutionary potential. In this sense, “Each Strike Leads to the Next” is a firm response to the dark-money-funded decorations featured as the backdrop to the Instagram posts of the Albanian political and social elite, their pathetic irrelevance only surpassed by their intellectual vacuity.

This exhibition is the result of the completion of the two-month residency in the city of Bulqiza as part of the project “Mineral policies”. This project is supported by Swiss Cultural Fund, a project of the Swiss Agency for Development and Cooperation (SDC), implemented by the Center for Business, Technology and Leadership (CBTL).