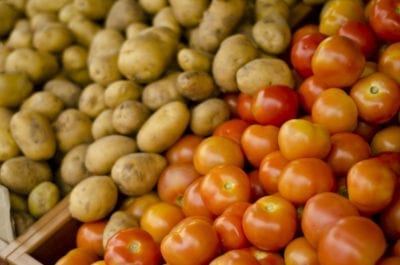 Farmers in Lushnje, in central Albania, have offered customers boxes of vegetables and fruit for free in protest over proposed tax packages to be implemented next year.

Dozens of farmers from the surrounding area marched down the city’s main boulevard towards the town hall. They held placards saying “there is no food without farmers” and asked the government to meet their demands.

Farmers also left boxes of fresh produce, including peppers, tomatoes, and cucumbers, on the street with a sign saying “a gift from farmers to the citizens of Lushnje.”

Protesters are demanding direct subsidies to the farmer of not less than 10 ALL (€0,08) per kilogram. Additionally, exporters ask for subsidies of 3ALL per kilogram to be paid directly to them by the customs directorate without additional bureaucracy.

Farmers also ask the government to equate sales VAT with purchase VAT,  while demanding that the proposed 10% VAT increase on agricultural inputs be suspended.

Among their demands, farmers ask that the state implement quality control measures, and set up laboratories that are open to all.

Finally, they want to regulate in law the difference between ‘good farmers’ and ‘bad farmers’ who do not pay their tax bills on time.

In 2020, almost 20% of Albania’s GDP came from agriculture. Furthermore, for many agricultural activities are the only source of sustenance and income. Despite this, farmers have long complained of excessive bureaucracy and a lack of governmental support for streamlining the sector and making it more profitable.