“There has been no organized effort to erase the addresses of Albanians in Serbia,” declared not too long ago Gordana Comic, the Minister of Human and Minority Rights of the Republic of Serbia. We have heard all Serbian ministers and high officials make similar declarations.

The insistence that in regions of Serbia with an Albanian-majority population, residential addresses are being verified in a bona fide manner, i.e., impartially and with full transparency, comes as no surprise. Nor does the denial by the Albanian National Council in Serbia (KKSH) of the claims made by Serbian authorities that they had reached a prior agreement on this point.

But why did Ms. Comic feel the need to make a statement on the issue of the passivization of addresses now, even though this topic was not at all included in the agenda set between KKSH and Belgrade in order to resume the dialogue? What can the Albanian minority in Serbia expect from the dialogue with a government led by Vucic’s party, which is also the main political force responsible for the mass deregistration of Albanians in Medvegja, Bujanoc, and Presevo?

In fact, by the end of 2021, it could be proven indisputably that Serbian authorities are deactivating residential addresses in Albanian-majority regions in the three southernmost municipalities in Serbia for political reasons. It can also be proven that a number of state institutions of the Republic of Serbia were involved in this campaign.

Since it became known that Serbian authorities had started a campaign to deactivate residential addresses mainly in the three Albanian-populated municipalities in southern Serbia, along the border with Kosovo, Serbian ministers have reiterated that they are implementing the Law on Residence of the Citizens the same way across all of Serbia.

In 2016, at the request of two Albanian MPs from the municipality of Medvegja and local Albanian activists, the Humanitarian Fund for Human Rights in Belgrade conducted a comparative study on the passivization of addresses and concluded that Medvegja and Bujanoc were the two municipalities with the largest number of inactive persons in all of Serbia.

The researchers published their findings in the newspaper Danas in Serbia and raised the alarm about the serious consequences of passivization for the Albanian minority. Since then, Serbian state authorities have adhered to their approach: deny that massive and selective passivization is taking place in the south and do not provide statistics on this issue.

Recently, a group of MEPs requested information from the Serbian ambassador in Brussels, before the approval of the EU’s progress report on Serbia, including on the issue of the passivization of Albanians in Serbia. The data provided by the Serbian ambassador show that, at the beginning of 2021, Medvegja and Bujanoc continued to be the two municipalities with the highest number of inactive persons in Serbia, as was the case in 2016.

The Serbian diplomat reported to the European Parliament that there were 1,782 inactive addresses for Medvegja, 570 for Bujanoc, and 92 for Presevo. 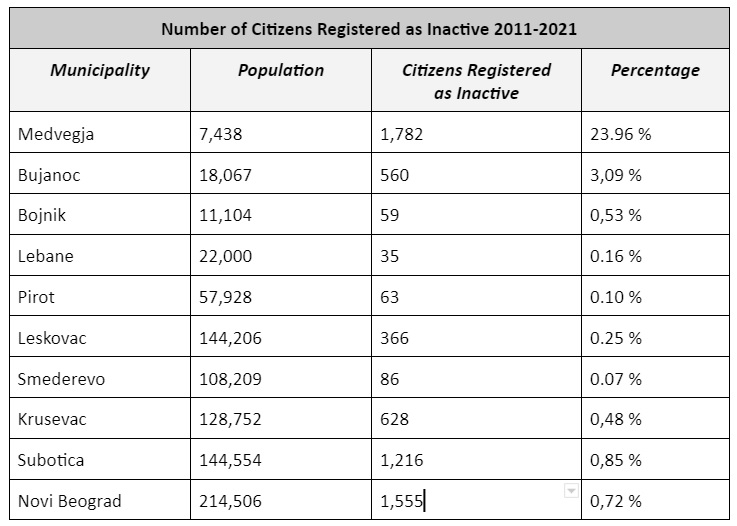 Even before human rights organizations and Albanian researches launched an awareness campaign on the issue, Serbian authorities had informally acknowledged that there were 4,214 passive addresses in the municipality of Medvegja.

Officially, however, Serbian authorities said that there were only 1,782 inactive addresses when the issue of selective passivization became public knowledge, so it is very likely that the actual number is much higher.

Serbian authorities have refused to provide ethnic data on the addresses made inactive, arguing that this is sensitive information. In particular, they have refused to talk about passivization in the Albanian community.

However, there is a way to break down the passivization numbers per ethnicity, and an important source for this is electoral registers and voter lists.

In Serbia, to be eligible to vote in local elections you must have a valid residence address — this means that voter lists indirectly indicate passivization: in those municipalities with a high number of inactive persons, the number of voters in voter lists has contracted.

This is exactly what happened in the Municipality of Medvegja. The number of voters has dropped dramatically from 2012 to 2019 — the first elections since the entry into force of the Law on Residence that allows passivization: the municipality went from 10,102 to 6,602 voters. During this period, the number of Albanian municipal councilors has decreased from eight to three.

Who are these close to four thousand people removed from the voter lists in Medvegja? 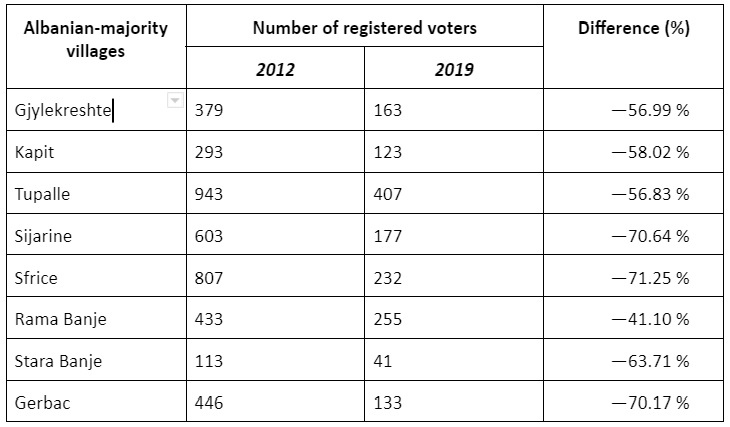 Looking at the numbers, this means that in seven years, Serbian authorities have removed 2,500 Albanian voters from the villages of Medvegja alone — not counting Banja e Siarinës and the town of Medvegja, which have a mixed ethnic population.

This means that over 70% of the persons removed from the voter lists in Medvegja were members of the Albanian community. This number becomes even more alarming when you realize that Nebojsa Arsic, head of the political coalition “Aleksandar Vucic — because we love Medvegja ” was re-elected mayor of Medvedja with 2,764 votes in 2019.

The above fact shows that passivization in Medvedja has had tangible political consequences that prove there is a political motivation behind the Serbian authorities’ investment in this process.

The large number of inactive Albanians and the drastic reduction in the number of Albanian voters are two important facts. They prove that something extraordinary is happening in the regions inhabited by Albanians in Serbia.

Above all, they are leading to fatal human consequences for many Albanians living on their land in southern Serbia. This will be the focus of the second part of this article.