Albanian Government Pledges Vjosa National Park but No Timeline Given 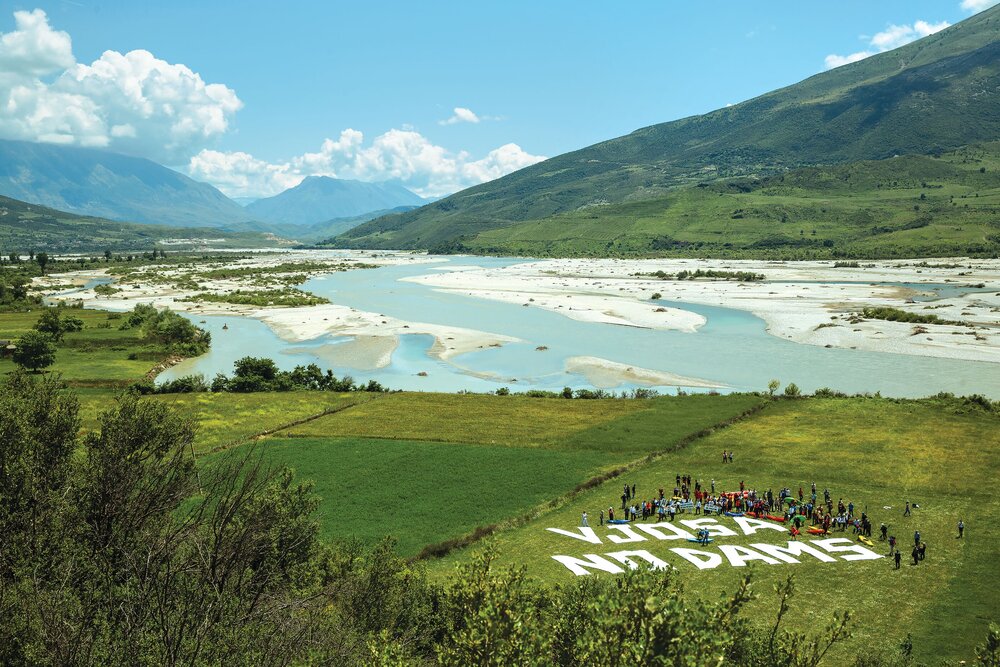 The Albanian government has signed a memorandum of understanding with international company Patagonia to develop the Vjosa National Park, as Prime Minister Edi Rama pledged any economic activity that affects the river would be prohibited.

Rama, along with Minister of Tourism Mirela Kumbaro, CEO of Patagonia Ryan Gellert and representatives from River Watch, Euro Natura, and Eco Albania, were joined by members of the local and international media at a signing ceremony in Tirana.

The Vjosa River stretches for 192 kilometres throughout Albania, and although some of its tributaries have been destroyed by hydropower plants, it remains the last wild river in Europe and is renowned for its flora and fauna, including endemic and endangered species.

“Let us be clear when we talk about a national park; we assume the categorical prohibition of any business of economic activity that could affect the river body and its wings,” Rama said.

In 2021 the Albanian government declared the Vjosa River and some of its surrounding area as a Natural Park, the second-highest protected designation after National Park. This was not enough for environmentalists who said they would only accept National Park status.

But for the first time, the government has pledged that it will create a National Park, although neither Rama nor Kumbaro have put any timeline on when this will occur.

Comment: The Possible Impacts of Shell Oil Exploration in Block 4 and Around the Vjosa River

There was also no mention of various projects that currently threaten the Vjosa and its tributaries, including the Vlora Airport at the Vlora-Narta Lagoon, various luxury hotels, and a EUR 185 million contract with Shell to explore for oil along its banks near Kelcyre and Permet.

Exit was unable to ask for clarification on these points as no questions by media were allowed.

Rama also took the opportunity to take a dig at Leonardo di Caprio who has publicly criticised the government and plans for the Vjosa. He said, “Leonardo came alive to attack the government but not to help the government.”

He continued that he would not deal with di Caprio any longer, and perhaps word of his criticism would reach him, and he would want to get involved with the work the Albanian government and Patagonia are doing.

Comment: A Trip To Permet, Guided By The Vjosa

The prime minister also spoke of the vast economic opportunities that the National Park could have for the region’s inhabitants. But, he noted, the path to a National Park is ”very complex”; therefore, the government asked for help from international experts, including Patagonia, in tandem with local experts.

“Patagonia has what it takes as we need the know-how ad experience in the protection area. It might seem easy to make a National Park, but it is challenging as it flows through the body of Albania.”

Rama also claimed that his government had taken many actions to protect the Vjosa, including freezing permits, which he said was overlooked by ”those who start a barrage of news articles of untrue statements coming to the defence of the last wild river of Europe”.

“The Vjosa is the last wild river which will not enter the circus of the energy system. Other rivers have become like circus dogs and cats that produce energy. Vjosa will produce a future in another form,” Rama said.

The memorandum includes two agreements whereby they agree to increase the protection of the Vjosa to the level of the International Union for the Conservation of Nature Category II National Park and the park shall include the Vjosa and its free-flowing tributaries.

As per the agreement, the parties will establish a working group within 30 days to start the planning phase. The park will include visitor centres, rangers, scientific and educational programmes, yielding new opportunities for the river’s communities.

Besjana Guri from EcoAlbania said, “While there is much work to do before we can guarantee the future of the Vjosa, this is a major milestone for Albania and for river defenders everywhere. The ambition of creating Europe’s first Wild River National Park is one step closer to becoming a reality.”

Meanwhile, Ulrich Eichelmann the CEO of Riverwatch added that today’s event has big potential beyond Albania, establishing the concept of a Wild River National Park.

“At the Vjosa, we are witnessing a new model of protection for other rivers in Europe, which are threatened by dam projects and other forms of pressure. We need to think bigger to protect our nature.”