Kurti Warns of Escalation of Tensions and Possible New Conflict 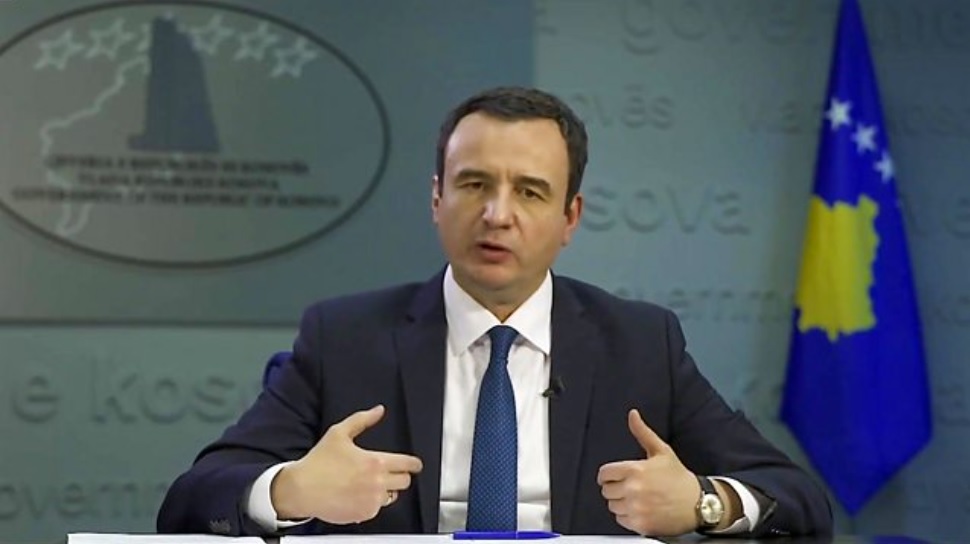 Kosovo is prepared to stand against a possible attack by Serbia as worsening strife with minority Serbs could result in a new armed conflict, Prime Minister Albin Kurti told Reuters in an interview on Wednesday (10 August).

Tension flared recently after Kosovo said that cars belonging to citizens of Kosovo would have to be registered with number plates issued by the Republic of Kosovo institutions. This includes plates with prefixes such as “PR”, “KM”, “PZ”, “GL”, “UR”, “PE”, and “DA”, left over from the Yugoslav system and would impact some 50,000 Serbs living in Kosovo’s Serb-majority north.

The situation calmed after Kurti, under US and European Union pressure, agreed to postpone the car number plates rule until 1 September and NATO peacekeepers supervised the removal of roadblocks set up by Serbs.

“We should not exclude that these aggressive policies of Belgrade could also turn into an assault against Kosovo in one way or the other,” Kurti told Reuters, speaking in English. “We are vigilant but not afraid.

He added: “I am not saying they are going to attack us this week or next, but it would be irresponsible to exclude…the possibility of rising tensions and new conflicts.”

The tiny landlocked Balkan country gained independence from Serbia in 2008, almost a decade after a guerrilla uprising against repressive Belgrade rule. Ethnic Serbs account for 5 per cent of Kosovo’s 1.8 million, 90 per cent ethnic Albanian.

Some 50,000 live in north Kosovo, near the border with Serbia. The remaining 40,000 live south of the River Ibar and use Kosovo government-issued license plates.

Serbia denies whipping up tensions and conflict in Kosovo, accusing Pristina of trampling on the rights of minority Serbs.

Opposition parties in Pristina have accused Kurti of scaring investors by openly speaking of possible new conflict with Belgrade.

Kurti rejects those accusations. He accused Russia, which is Serbia’s main ally and has vetoed Kosovo’s bid for United Nations membership, of a role in stirring up fresh ethnic tensions in the former southern province of Serbia.

“Despotic (Russian) President (Vladimir) Putin is a man of war, and he would have an interest in spreading war because he wants to normalise war,” Kurti said, alluding to Russia’s invasion of neighbouring Ukraine in February.

“We have our institutions and organs of security and defence; Kosovo is a state now; this is not the year 1998,” Kurti said. “This is 2022, so we are much more prepared to defend our sovereignty, territorial integrity, our democracy, the rule of law, constitutionality, and our progress.”

Kurti and Serbian President Aleksandar Vucic are expected to meet in Brussels for more talks on 18 August. Belgrade and Pristina are publicly committed to an EU-sponsored dialogue to resolve outstanding issues, but little progress has been made.

Kosovo threw off Serbian domination in 1999 after NATO air strikes ended a brutal counter-insurgency by Serbian security forces. But Serbia legally still considers Kosovo an integral part of its territory and, with Moscow’s help, has blocked Kosovo from membership in various international institutions.

NATO has around 3,700 troops stationed in Kosovo to maintain its fragile peace, and last week, it said it would intervene in line with its mandate if stability were jeopardised

Kosovo and Serbia have been engaged in a dialogue facilitated by the European Union since 2011 aimed at “normalising relations”. The dialogue has shown very little success, with parties trading blame for not implementing more than 30 agreements.

The crucial issue – Kosovo’s recognition by Serbia – has never been on the table during the 10 years of dialogue.

Serbia has vowed never to recognise Kosovo, which it considers a cradle of the mediaeval Serbian statehood, and has been backed in its insistence by Russia, as well as five EU countries that refuse to recognise Kosovo:  Greece, Spain, Romania, Slovakia, and Cyprus.