As gas and electricity prices skyrocket, many households in Europe are turning to firewood as an alternative heating source this winter. But the surge in demand and supply cuts from Russia are pushing up prices and causing shortages, threatening to leave the most vulnerable, who are often reliant on wood-burning, out in the cold this winter.

“When talking about wood for energy, most EU member states are experiencing shortages and pellet prices have multiplied by around 2.5 times in countries like Germany and Belgium,” a Bioenergy Europe spokesperson told EURACTIV.

Moreover, the increase in energy prices has led many EU citizens to turn to this energy source, according to the trade association.

From July 2022, a ban on importing Russian pellets used for energy production came into force. Sanctions on wood imports have also led to supply shortages and high prices, which has had a ripple effect across the supply chain.

High prices are seen across Europe but could hit central and eastern European harder, as many households in these countries, particularly in the lowest income brackets, rely on biomass for heating.

“Energy poverty is a major danger this year, and people are going to die. Governments and the EU must above all protect them and, where possible, take measures that also make households more resilient for years to come,” Silvia Pastorelli, Greenpeace EU climate campaigner, told EURACTIV.

In May 2022, the price crunch was already hitting Hungary, Bulgaria and Romania, where a high share of low-income households heat their homes with firewood.

In Bulgaria, where around half of the households use firewood in winter because it is the cheapest and most accessible fuel, one cubic metre of firewood has risen from €40-50 in 2021 to around €100-150, depending on the region.

And, while the latest data from the Hungarian Statistical Office (KSH) shows prices for uniform-sawn firewood have remained stable during the invasion of Ukraine, local media reports suggest shortages and price hikes of more than 50%, with further increases expected.

In August, the civil society organisation Habitat for Humanity Hungary warned that, unless the government spends more to subsidise firewood and takes concrete steps to prevent private players from buying up stocks, “catastrophic conditions” could occur.

In Poland, too, wood prices are already almost 100% higher than a year ago. And, in Slovakia, depending on the wood type, prices have doubled on average compared to last year.

“Household demand has increased enormously in recent months. In some dispatch warehouses, the waiting lists are filled until the end of the year,” said Marína Debnárová, spokesperson for the Forests of the Slovak Republic, the company responsible for the state-owned forests.

The problem also extends beyond the bloc to Albania, Kosovo and Serbia, where leaders have already called for EU help with the looming energy crisis. 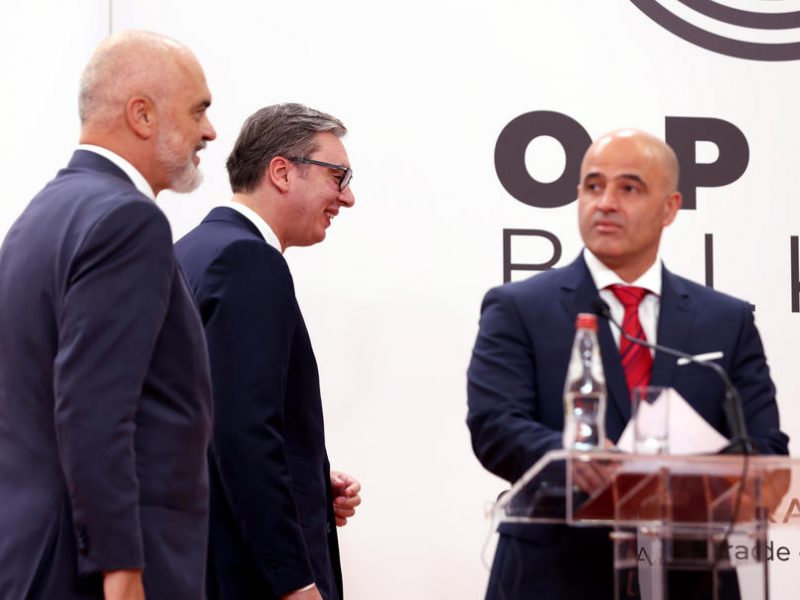 As a tough winter with the promise of power cuts and electricity price hikes looms large over Europe, Western Balkan leaders gathered for the Open Balkan summit in Belgrade on Friday (2 September) and called upon the EU for support.

For instance, in Albania, where some mountainous regions rely on firewood to get through the cold winters, one cubic metre of wood is currently being sold for up to €60 (7,000 lek), up from €34 two years ago.

“It is very difficult for the non-pensioner to afford life with these prices, even an average person cannot afford it, he is forced to go into debt,” a local citizen told Exit.

In Serbia, around a million households use firewood and more than 110,000 use wood pellets with prices having increased 15% since 13 August. Neighbouring Kosovo has seen a price surge of 7.4% between June and July alone, according to official data.

Many governments are taking action to protect households, including export bans and allowing more trees to be cut, but there are concerns that illegal logging may also become a solution.

In Bulgaria, the caretaker government organised meetings with wood processing companies and urged them to provide wood for the population by reducing exports.

Although illegal logging is a crime, the problem is widespread and various studies have shown that the forestry authorities in Bulgaria are one of the most corrupt institutions in the country.

In Hungary, the government was forced to partially backtrack on an August decree that relaxed felling rules in protected areas and allowed younger trees to be harvested in forests fully owned by the state, now requiring that “the increased demand for firewood must [be met] primarily by the gradual harvesting of [non-native] acacia trees”.

The Hungarian government has also moved to limit firewood exports. While not an outright ban yet, it grants the government the power to control exports and the right to first purchase fuel for social purposes and public services, with a possibility to stop sales abroad altogether.

Meanwhile, on Friday, Poland approved a so-called wood allowance of PLN 1000 (€212) per household, to help as many as two million households in the country that burn wood through the winter.

In Slovakia, panic over supplies led to calls for an export ban, but the ministry of agriculture ruled this out. However, the Forests of the Slovak republic recently announced they will open reserves for people in response to rising demand so that people can take wood from certain areas under the supervision of an employee of the company.

Beyond the EU’s borders, concerns are also on the rise about illegal felling fuelled by demand.

In Albania, for example, where the central government does not have any initiatives to help citizens reliant on firewood this year, the municipality of Korca has given permission for a total of 0.6 hectares of firewood to be felled.

This will not satisfy the demand that stands at around 20 hectares and is likely to be met through illegal sources or not all. A ten-year moratorium on felling timber was adopted in 2016 but illegal forestry is still widespread, with Albania losing some 20,153 hectares of woodland each year.

Illegal logging also remains a significant problem in Kosovo, which has lost more than 7,600 hectares of forest in the last 20 years, equivalent to one and a half football fields every day since 2000.

There is an ongoing debate about the sustainability of wood-based energy. Bioenergy Europe argues that it is a renewable energy source that will help boost Europe’s energy independence.

However, environmental organisations are critical of this and warn about the impact of carbon emissions released by producing energy from biomass.

Sustainability criteria for biomass to be counted as renewable are laid out in the renewable energy directive, which is currently under revision.