Albania: In Europe’s Wild East Cannabis is a Billion-Dollar Business 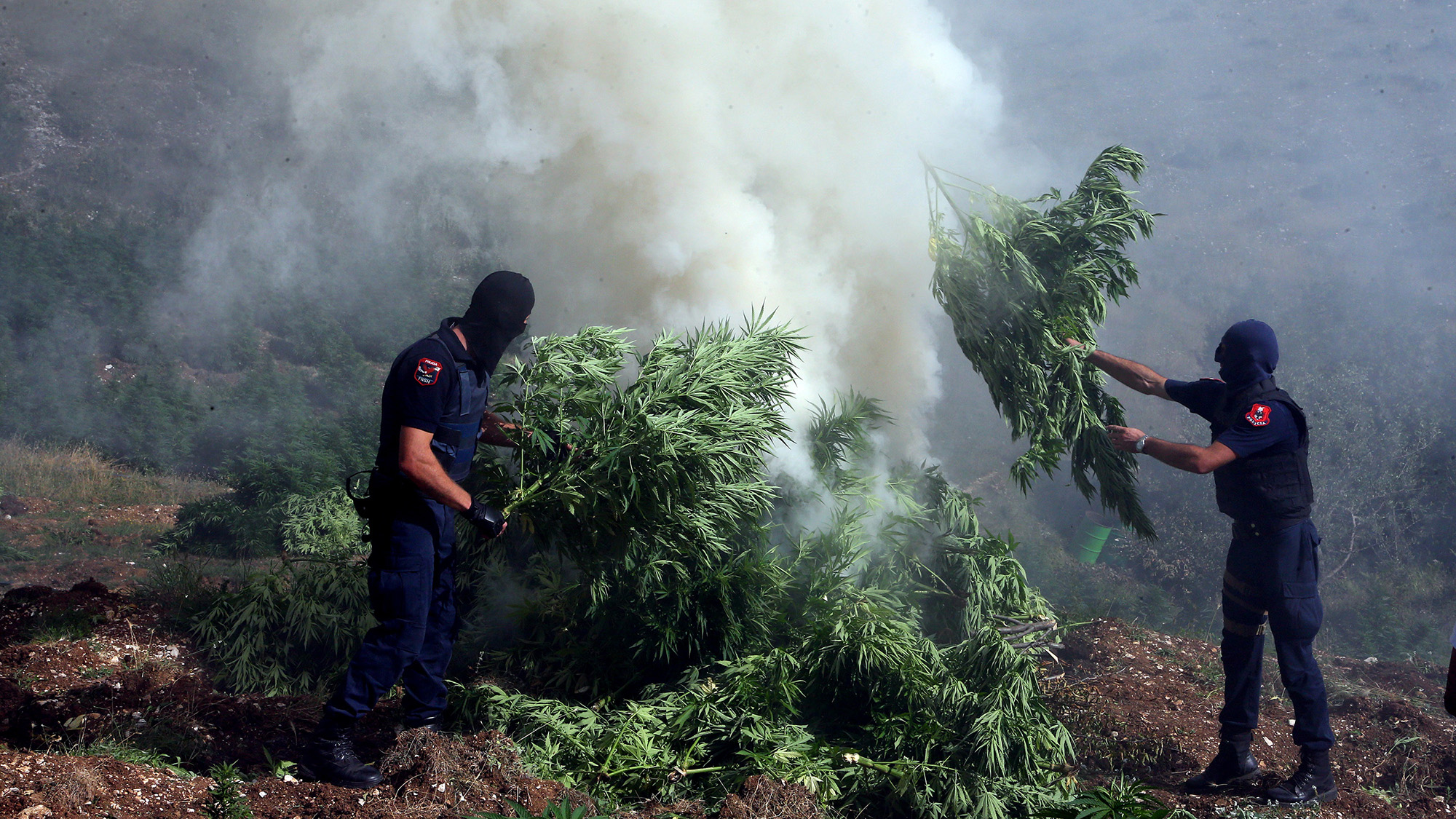 In 2014, Albania was the focus of international media reports stating the small country to be the largest producer of illegal cannabis in Europe. At that time, special police forces had entered the mountain village of Lazarat to start a three-day battle with local cannabis farmers. When the Albanian police units began to capture the city on the early morning of June 16, 2014, they were armed with machine guns, armored fists, and hand-grenades. After the bust of the Minister of the Interior, Saimir Tahari promised to do everything possible to eradicate cannabis cultivation in Lazarat. However, the forbidden plant still remains the most important economic factor of the otherwise impoverished region; the area around the 7,000 inhabitants mountain village has since been controlled by police and army units.

Although there are only numbers of detected plantations available, the cultivation in the inaccessible mountain region close to the Greek border has clearly grown since 2014. Last year, Albanian anti-drug units claimed the eradication of 2.3 million cannabis plants in 1,250 operations and recorded 250 suspects. The alleged market value of 3.5 billion euros is about half of the entire Albanian national budget.

For years, Albanian politicians have blamed each other for profiting from the cannabis trade, and therefore, either tolerate it in secrecy or support it in public.

On Monday, the Albanian government announced the dismissal of Minister Tahiri with immediate effect. The Minister of the Interior, who was responsible for the military-style operation back in 2014, had been hit by the headlines. Tahiri was suspected of profiting from the expansion of Lazar’s cultivation to the entire region and of cooperating with the illegal industry by erasing criminal records. The former chief of the Police Drug Forces, Dritan Zagani, was arrested in 2015 under the threat of corruption and claimed that Tahiri is part of a secret network. Zagani meanwhile fled from Albania to Switzerland and asked for political asylum. In a current video, Tahiri contests all allegations so far.

Italy and Greece are the biggest markets

Most of the crop is smuggled into the neighboring countries. Anyone who purchases cannabis on the black market in Greece or Italy usually buys Albanian flowers. In previous decades, Greek youngsters hauled sacks full of cannabis across the mountains to Greece. Today, the bulk of the Albanian harvest is transported by boats across the Adriatic coast to the neighboring countries of Italy and Greece. From there, it can be transported to any country in the Schengen zone. For many years Italian tax investigators suspect the Mafia to be responsible for the transport, logistics and resale.

The annual cannabis production in Lazarat for 2013 was estimated at 900 tons with a total value of 4.5 billion euro by the Italian Airforce. “Lazarat annually produces 900 tons of marijuana, mainly of Dutch varieties, which brings profit of 4.5 billion of euros,” Denovive Stefano Bostoni, Chief of the Italian Air Force Units in Tirana stated towards Albanian media. Besides Lazarat he mentions four other important, cannabis cultivating regions (Valona, Shkodra, Tirana and Durres) rarely mentioned anywhere else.

The UNODC is operating an office in Albania’s capital Tirana, but never published concrete figures on the estimated quantity of cannabis produced in the country. However, observers confirm that cultivation has increased as a result of itsshift to inaccessible mountain regions. In principle, with few exceptions, the entire country is an inaccessible mountain region with perfect Mediterranean climate for cannabis cultivation. This is confirmed by the helicopter operations the police have used on the search for cannabis fields throughout the South since 2015.

Cannabis is illegal in Albania, but the “possession of a daily dose” of illegal substances, including cannabis, is not punished. For cultivation and trade, the law provides 5 to 15 years of imprisonment. Five grams of cannabis costs between four and eight dollars on the black market, but the quality and active ingredient contents are not particularly high.

The permanent socioeconomic instability after the end of the communist era has led to the fact that the cannabis plant has become the most important source of income for Albanian agriculture. After the Second World War, the communists deported unloved families to Lazarat, and the village developed a regime-critical attitude toward the government in Tirana which continues to this day. In Lazarat, more than 90% of the population have been at least temporarily involved in the cannabis business.

After heavy criticism from the UN and the EU, the first attempts by the Albanian government to stop cannabis cultivation in the region were launched in the early 2000s. After several clashes with the police, Lazarat’s only police detachment was destroyed by the unruly peasants in 2004; the police tolerated their activities for another ten years.

Nowadays, the presence of the police and military is perceived more as an act of occupation than protection for the inhabitants. The government has generally tolerated the cultivation and associated economic boom of the village and its surroundings area since the mid-1990s. The area around Lazarat is the only rural region in Albania that does not suffer from a population shift to the cities.

Mexico and Morocco have been demonstrating for decades that cannabis cultivation can not be eradicated with special units and helicopters or other repressive measures when the illicit substance is the economic basis of entire regions and countries. The only way to deal with cannabis cultivation and its criminal infrastructure, including actors in Albania, Lebanon, Syria, Morocco, Panama or Mexico, is an international regulation. Until that time comes, cannabis will continue to be cultivated in the Moroccan Rif, the Lebanese Bekaa Plain, South of Albania, Oaxaca, and beyond, where the profits disappear in dark channels instead of generating taxes.