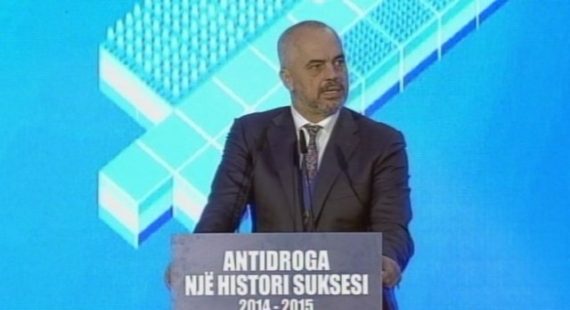 Exit.al | In September 2015, Prime Minister Edi Rama held a propagandistic conference in the Palace of Congresses in which thousands of police officers and chiefs participated and where he heralded the “brilliant successes” of the war on drugs.

Flanked by Italian Ambassador Massimo Gaiani and US Ambassador Donald Lu, Prime Minister Rama declared victory in the war on drugs and went on rant, insulting and attacking everyone “who had thrown mud” on the brilliant work of the police and his Minister of Interior Affairs Saimir Tahiri.

In a wild and – from our current perspective – daring manner, Prime Minister Rama openly attacked former border police chief of Vlora, Dritan Zagani, who a few weeks earlier had publicly denounced the criminal and drug trafficking activities of the Habilaj brothers and their links with former Minister Tahiri.

The words of the Prime Minister against Zagani were clear and strong:

A criminal, one of those that the reborn State Police has had the courage to identify in its own ranks and to purge, a collaborator of drug traffickers who leaked police operations has become the hero of the opposition, recently even of the head of state.

A hero that apparently demands answer, that doesn’t go to the prosecution and answers only once about the accusations leveled against him, but has presented himself for political asylum in another state. That’s enough to understand how low this game has gone, how desperate in fact has become the industry of mud, while everything was presented here today and luckily, but unluckily for us as a people, it received the approval of two ambassadors directly involved in this war, I don’t believe that they’ll stand up to say that these were lies, and I hope that they won’t also put the American Ambassador under the decriminalization law.

Former border police chief Zagani indeed received asylum in Switzerland, and his public revelations from 2015 have now all been confirmed, and even surpassed, by the investigation of the Guardia di Finanza.

On the same stage, Prime Minister Rama strongly defended his right hand, former Minister of Interior Tahiri, in words that today resound with a supreme, and unintended irony:

I pay attention that what anyone says about you […] when I hear any type of accusations, any type of monstrosities, and any type of verbal attacks on the Minister of Interior, on the chiefs of the State Police, on the government itself in relation to crime and with everything related to the battle for which you leave your house every morning. It must be without a doubt very heavy. It must be without a doubt very discouraging, it must be without a doubt very difficult not to be shaken by doubts that maybe I, a police officer together with my colleagues or together with all the girls that recently joined the State Police, that we’re doing it for nothing, that we’re fighting windmills, while our managers, our minister, while our government were related, if not leading all this criminal activity. […]

Unfortunately for Prime Minister Rama and his credibility, the incontestable facts have now shown that indeed these police officers were justified in being “shaken by doubts,” for indeed Rama’s government has now been decisively linked to “all this criminal activity.”