How the Clan del Golfo Sent Cocaine from Colombia to Albania 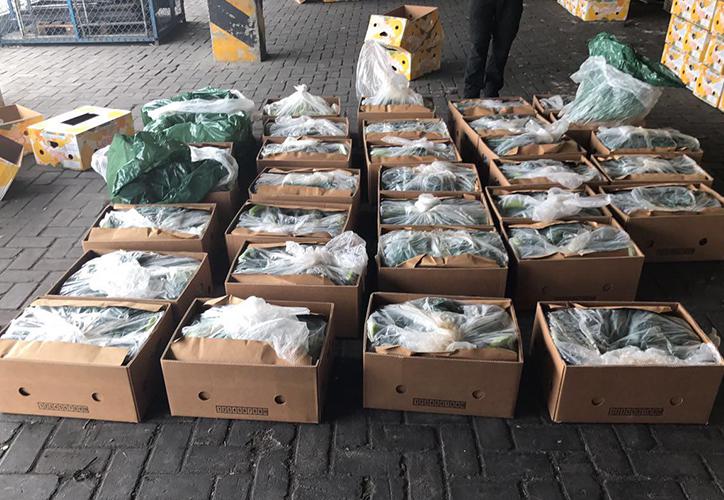 Last week, the Albanian police confiscated the record-breaking shipment of 613 kg of cocaine as it was entering the warehouse of Arbri Garden shpk in Maminas, Durrës. The vehicle’s driver and the company’s administrator were arrested. The company’s owner was in Germany.

It seems the drugs were bought from the trafficking cartel Clan del Golfo (the Gulf’s Clan). To reach its destination, the shipment had followed the itinerary Colombia–Malta–Italy–Albania.

The shipment arrived in the port of Durrës on February 19, where it remained for 18 days until the company’s administrator cleared it for customs as a shipment of 20 tonnes of bananas.

The Albanian Customs and police had been informed by the Colombian Navy and other agencies of the hidden cocaine, even verifying this intel during the night of February 19.

The police operation was coordinated perfectly, leaving the transporter of the shipment completely unsuspecting until the moment the vehicle reached the warehouse of Arbri Garden shpk, a company dealing with the import and export of various products.

This is the second time that Colombian drugs have been confiscated in Albania, the first being the case of the warehouse in Xibraka, where the substance, arriving hidden in cement or leather was processed by two Colombian chemists.

How come, though, this shipment made it to Albania with no problems whatsoever along its way?

This time, unlike the Xibraka case, the 613 kg of cocaine were hidden under the floorboards of the truck, in a concealed compartment. In this case we are no longer dealing merely with an Albanian trafficking organization, but, rather, with an international one with ties and collaborators in several border customs and ports.

Arbri Garden shpk had ordered 20 tonnes of bananas and it seems that it had meticulously planned every detail, even leasing the truck from the company Pelikani Transport.

Those arrested are but a few small traffickers that are used to transport the cocaine while the profit goes to the sellers, namely, Clan del Golfo.

The drugs were transported from Colombia to Albania in two different ways.

First, the money, amounting at around €6 million, was sent to the seller, the Colombian organization, through Albanian traffickers operating in drug trafficking rings like Clan del Golfo. These Albanians guarantee the payment and acquire the cocaine. They also acquire information on the processing of the product and all its stages. The cocaine, bought at a wholesale price in Colombia, was intended for the European market, where it would be sold at a street value of €180 million.

Who placed this order? Have they brought cocaine to Albania in other instances, as well? What is the connection between Clan del Golfo and drug organizations in Albania?

The order wasn’t placed by only one but, rather, four Albanian criminal organizations, each with their own people operating in the international drug trade.

Some of these international operators have criminal records in Albania, Greece, and Italy. Their job is finished the moment the cocaine shipment leaves Colombia. Then, other members of the organization, who operate in European countries, step in to ensure the shipment remains “untouchable,” collaborating toward this goal with trafficking organizations in various ports and customs agencies.

How did the Colombian authorities discover the shipment of cocaine?

In mid-January, around midnight, a checkpoint near the village of Cuestecitas set up to monitor vehicle movement in and out of areas under police watch encountered suspicious activity from a truck driver.

The latter pulled up to a stop claiming his vehicle was overheated and lifted the vehicle’s hood. The police offered to help, but the truck seemed functioning. After this, the officers decided to carry out a search.

The truck was empty. The police examined the oil tank and used drug-detecting dogs to search the vehicle, but failed to look under the floorboards. They allowed the truck to leave.

In Albania, however, drug trafficking groups are usually identified by the codes they put on parcels: a way of identifying the quality of the product that will then be introduced at the appropriate price in the European markets.

Is the Durrës shipment connected to the drugs found in Xibraka, Elbasan?

It is not yet known if both cases involve the same group, but it is certain that the cocaine and the Colombians arrested in the Xibraka case both belonged to the Clan del Golfo, rather than Bolivia, as the rumor was back then.

The operation in the Xibraka case was coordinated by German law enforcement agencies, whereas in the Maminas case the intel did not come from any European country, but from the Colombian Navy, who discovered the shipment during a routine search.

Unlike the Xibraka case, where cocaine was hidden in construction materials like cement or organic materials used in the preparation of leather, in the Maminas case the cocaine was parcelled out and hidden in the truck. This was probably because in the Xibraka case the process of extracting the product took over two months – according to the traffickers, this was one of the reason their operation was uncovered – which probably lead the traffickers to stay away from hiding cocaine inside garments or other more covert ways.