New Director in Charge of Sigurimi Dossiers, Questions about Qualifications and Conflicts of Interest 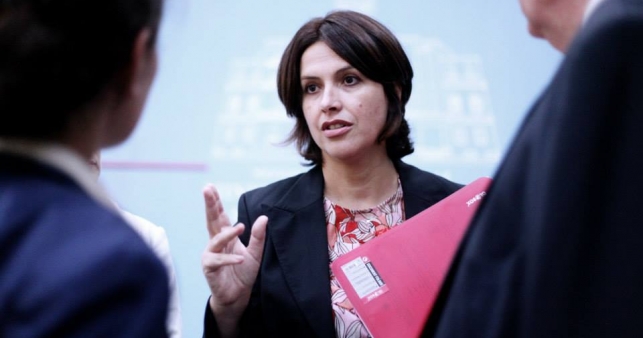 A few days ago, former Deputy Minister of Social Welfare and Youth Gentiana Sula was nominated by Parliament as director of the Authority for Information about Documents of the Former State Security (AIDISSh).

The AIDISSh will implement the law “For the Right of Information about Documents of the Former Sigurimi,” approved in 2015, regulating the archiving of and access to the files of the former Sigurimi.

The AIDISSh is also legally obligated to provide information whether candidates for high state positions have collaborated with the Sigurimi or the political institutions of the dictatorship. The same holds for any candidate up for elections.

In spite of the onslaught of propaganda in government-related media outlets, it is doubtful whether Sula is actually qualified to be the director of the AIDISSh. Apart from being a member of a family that was persecuted during the communist period, she is a biologist and worked for UNICEF.

First of all, art. 9.d of the above-mentioned law requires any member of the AIDISSh to have an experience of ten years in the appropriate field. No evidence has been provided by the government that she has worked for ten years in comparable institutions.

Furthermore, art. 9.e specifies that a member cannot be member of a political party. Although she may formally not be a member of the PS, she has been a PS Deputy Minister for three years. She only left her ministerial position in order to be nominated director. So her nomination is at least against the spirit of the law.

And finally, art. 9.f states that a member cannot have a conflict of interest. This is perhaps the most obvious problem with her nomination.

A husband in construction

Gentiana Sula is the wife of Gentjan Sula, the owner of the construction company AgiKons shpk, which regularly takes part in public procurement procedures.

For example, a combination of AgiKons and Edil Al-It shpk recently won the prestigious tender for the rehabilitation of the Theater of Opera and Ballet for 926,754,355 lekë (~€6.8 million).

Her nomination as member and director of AIDISSh is thus a direct conflict of interest, because the institution she will lead is supposed to evaluate precisely those people that open and manage government tenders.

One of the silent developments in Albania has been the merger and concentration of political, economical, and media power into the hand of a small group of people.

Business currently seeks to directly control political power, while it is well-known that politicians are in direct or indirect control of the most important companies in the country. At the same time, the merger of business and media, as well as the use of the media solely in favor of business interests has since long been a reality.

During the Rama government there has been a steady increase of the number of children, spouses, and relatives of media and business moguls in important state institutions.

The nomination of Gentiana Sula as director of the AIDISSh, even if she were qualified, not a party member, and not in a conflict of interest, is yet another sign of this worrisome development.