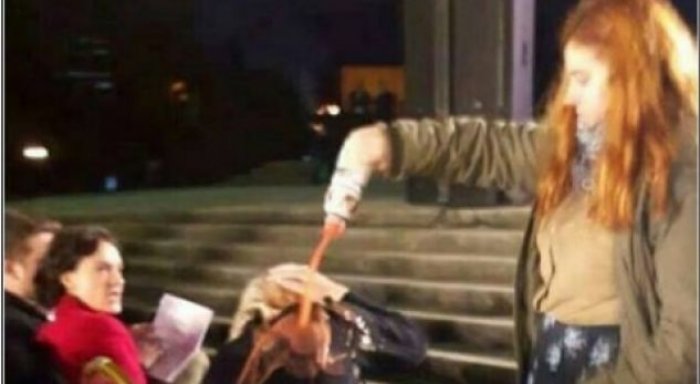 Yesterday, student and activist Mirela Ruko of the Movement for the University (Lëvizja për Universitetin) poured a bottle of tomato sauce over Minister of Education and Sports Lindita Nikolla at an event related to the International Day of Students, as a protest against the education reform, which has left many students without department, and many departments without students.

This morning she was released form police custody, and Exit talked with her about the events of the last twenty-four hours.

What is the background of your action?

Mirela Ruko: “Since we started the Movement for the University three years ago in response to the ongoing neo-liberalization of public education, we have been protesting against changes in the law for higher education that profit the private universities that are clients of the government.

“Now that the law has passed, the effects are for everyone to see: high school graduates with high GPAs left without university; several public university departments, such as mathematics and medical imaging, are left with hardly any students and face possible closure; many other students are forced to take on heavy loans to pay the fees at private universities.”

Ruko: “I was pulled away from the minister by the Republican Guard. No one from the audience protested or helped me, because the event in the Pyramid was actually a party event at which only members of FRESSh [the youth branch of the Socialist Party] were present.

“They held me until the Order Police arrived, who took me to Commissariat Nr. 1. They kept me there for ten hours for procedural reasons, after which I was released. The police treated me in a good and non-violent way. My official declaration has been that this was an act of political resistance.

“I have been officially accused of ‘assault because of duty’ and ‘disturbing the public order,’ but as far as I know Minister Nikolla did not file any charges. Actually, the law concerning ‘assault because of office’ only exists in Albania, there is no other European country that protects officials in the same way.

“For a long time we have sought the resignation of Minister Nikolla. We will persevere until the end.”