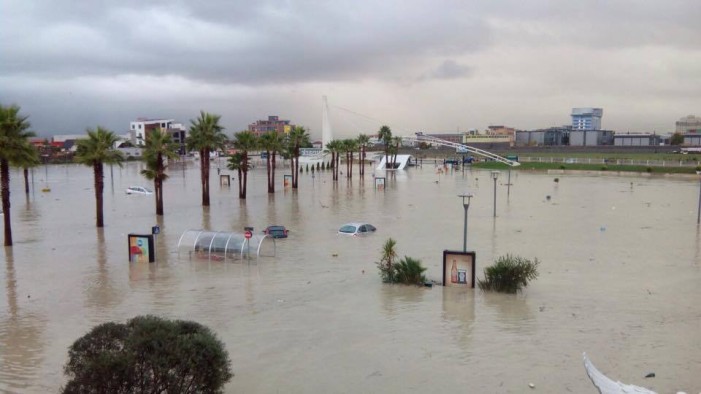 Heavy rainfalls have caused floods in almost all of Tirana. The Lana has left its river bed, flooding most all the main axes of the city.

The neighborhoods of Selita, Don Bosko, Komuna e Parisit, Kombinat, and the large market are completely flooded, as well as Bregu i Lumit.

The highway from Tirana to Durrës is inaccessible as dozens of cars are stranded on the flooded road. The overpass as Qafë Kashar, in the direction of Rinas airport, has also been completely blocked, with water threatening the houses along the road. The situation near the airport is equally alarming, with dozens of cars stuck in the water. The City Park shopping mall and its adjacent parking lot are also completely flooded.

The Operator of Electric Energy Distribution (OShEE) has announced that the thermoelectric plant in Kombinat and several power lines have been flooded, causing a full power outage the neighborhoods of Kombinat, Yzberisht, Kodra e Diellit, Selita, and Porcelan. The OShEE has cut the connection to these zones until the water level goes down.

Government unable to deal with situation

Mayor Erion Veliaj had announced yesterday that 1,800 municipal employees would be ready in the field to clean the draining channels. It seems, however, that they were not equipped with the right equipment to do so.

This is ironic, as the equipment that the municipality frequently uses for its “free” concerts and other large state-sponsored events is usually state of the art. At the same time, essential public services remain without the minimal level of technology to deal with emergencies such as these.

The level of unpreparedness of the government, which has also faced floods in previous years, raises several question marks as regards its investment strategy for public services. While the municipality has been greatly investing in several prestige construction projects and the renovation of governmental buildings, it appears to have neglected less visible – but all the more essential – infrastructural works.