Yuri Kim: Tirana Pyramid was “Cynical Investment of the Dictatorship” 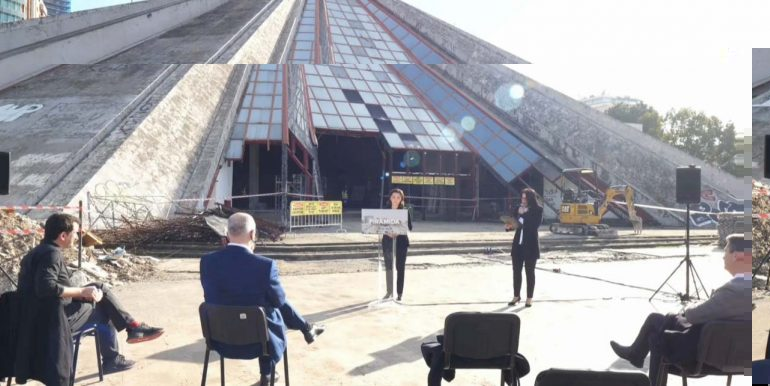 US Ambassador Yuri Kim considered the old incarnation of the Tirana Pyramid “a cynical investment of the dictatorship”.

During her speech at the start of the works for the reconstruction of the Pyramid, she said that a year ago the American foundation agreed to turn this object into a center of innovation and technology.

“As we all know, the Pyramid of Tirana was opened in 1988 as the Enver Hoxha Museum, a cynical investment of the dictatorship. As the Albanian people proved in 1991, and as they show today, they actually had a role.

A little over a year ago, the Albanian-American Development Foundation agreed to promote technology innovation.“

Kim said that this center will serve for young people to develop in these areas.

Mayor Veliaj has promised for years the reconstruction and change of the function of the Pyramid, but work only started in the last couple of months.

Meanwhile, the Municipality cordoned off the Pyramid and the surrounding area for almost two years, despite not having a permit for reconstruction. This permit was only approved in June 2020.

Exit News brings the following chronology for the change of ownership of the Pyramid and the abolition of the status of ‘cultural monument’:

To facilitate the decision-making process for the Pyramid, the Rama Government transferred its ownership from the government, the Ministry of Culture, to the Municipality of Tirana.

This government decision makes it easier to decide on status change and reconstruction of the Pyramid. Previously any decisions required for the Pyramid would have been passed to the Council of Ministers, but now it remains only in the hands of the Mayor.

In December 2016, the Council of Ministers transferred ownership of the building and land from the government to the Municipality of Tirana. Due to the change in the status and ownership of the Pyramid, there would be less oversight and bureaucracy.

With the DCM of December 2016, it was determined that the pyramid will be used by the Municipality of Tirana as “a multifunctional center for organising social performances and for the promotion of art, culture, and technology.”

Then, in April 2017,  the Pyramid of Tirana had its protection as a cultural monument removed.

Municipality plans for the reconstruction of the Pyramid

Mayor Veliaj  has promised  that the Pyramid ‘will be transformed into one of the largest centers of innovation and technology, art and culture in the region.’

The project for its reconstruction was made by Rama’s favorite architect, the Dutchman Winy Maas, supported in Tirana by another architect close to Rama, Gent Agolli, of the RI studio.

The whole process was done with a complete lack of transparency and with manoeuvres to avoid public tenders and competition.

In January 2017, the Dutch architect of  MVRDV, Winy Maas, participated in a discussion by the Municipality of Tirana organised at the Pyramid on plans for its reconstruction.

In June 2018, the news became public that MVRDV “won” the tender for the reconstruction of the Pyramid despite there being any public competition or tender.

The official website of the MVRDV firm clearly stated that the Pyramid project was a project for the Municipality of Tirana (that is, a public project that must be subject to public procurement laws) for an “undisclosed amount” of money.

This is against the law, as the amount of money should be made public.

As Exit News previously wrote, the solution to this “problem,” ie the obligation for public competition, was the change of the client from the Municipality of Tirana to the Albanian-American Development Foundation (AADF), a private foundation that is not subject to public procurement legislation.

The project has been updated on the MVRDV website, noting the client is AADF. In official documents, however, the client is declared as the Municipality.

In terms of the construction of the Pyramid, a consortium of Fusha Shpk and Edil-AL, two of the contractors closest to the government won the bid worth EUR 10 million.

It is noteworthy that the main selection criterion of the tender, which was that the competing companies have previously performed similar work at 50 percent of the fund for the construction of the pyramid, ie about € 7 million, do not meet any of the two winning companies.

If “similar projects” were to be interpreted as socio-cultural objects, then an object worth at least € 7 milion, in the last three years, neither the company Fusha nor Edil-al meets this criterion.