From Socialist Realism to Expressionism, One Painter’s Journey from Communism to Democracy 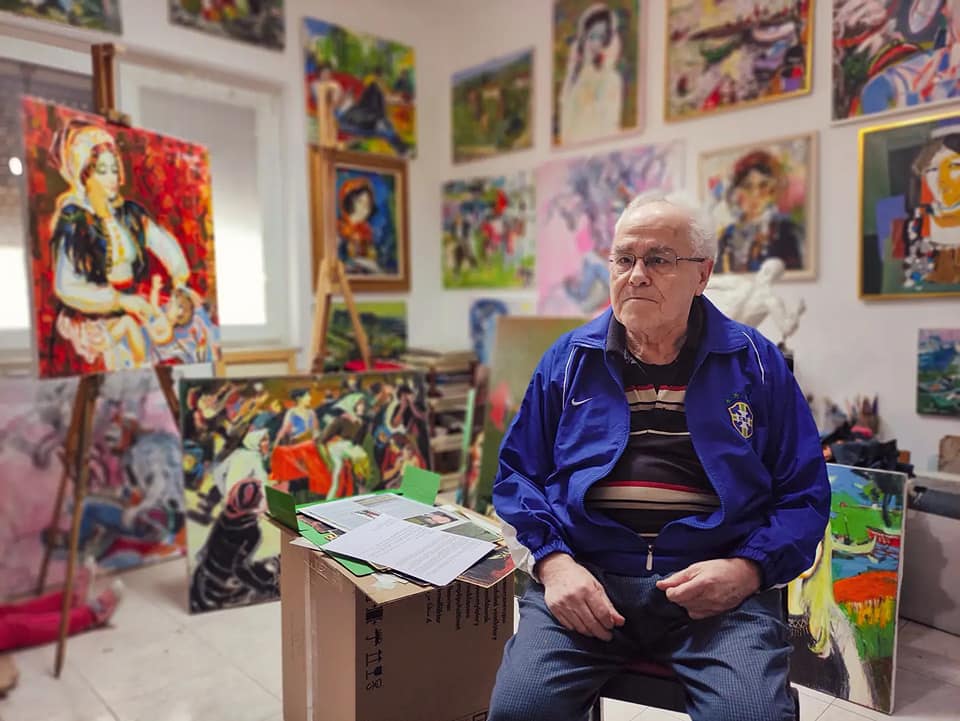 Inis Shkreli unlocked the large iron door and swung it open before standing back and ushering us in. She is the daughter of Albanian painter Lec Shkreli, an artist who has been active for over half a century and had his first exhibition while still at university.

The scene that unfolded was a modest apartment, covered almost from floor to ceiling with vibrant colours and shapes. As we walked inside, it took a moment to adjust to the assault on the senses. Women in traditional clothing expressed with pink, orange, and green, wild landscapes of purple and blue, and figures from Albanian history in bold reds, blacks, and greys.

Lec met me as I stood by the door, shaking my hand and inviting me into his studio. A faint smell of turpentine hung in the air as I sat down with my back against a wall. For some moments, I was quite lost for words as I struggled to take in my surroundings. The canvases were of every size and variation of cuboid. Some were propped against the wall, others nailed and hanging, and some remained largely unfinished on large easels.

We were served herbal tea and chocolate biscuits while my daughter chased the family cats around the balcony. 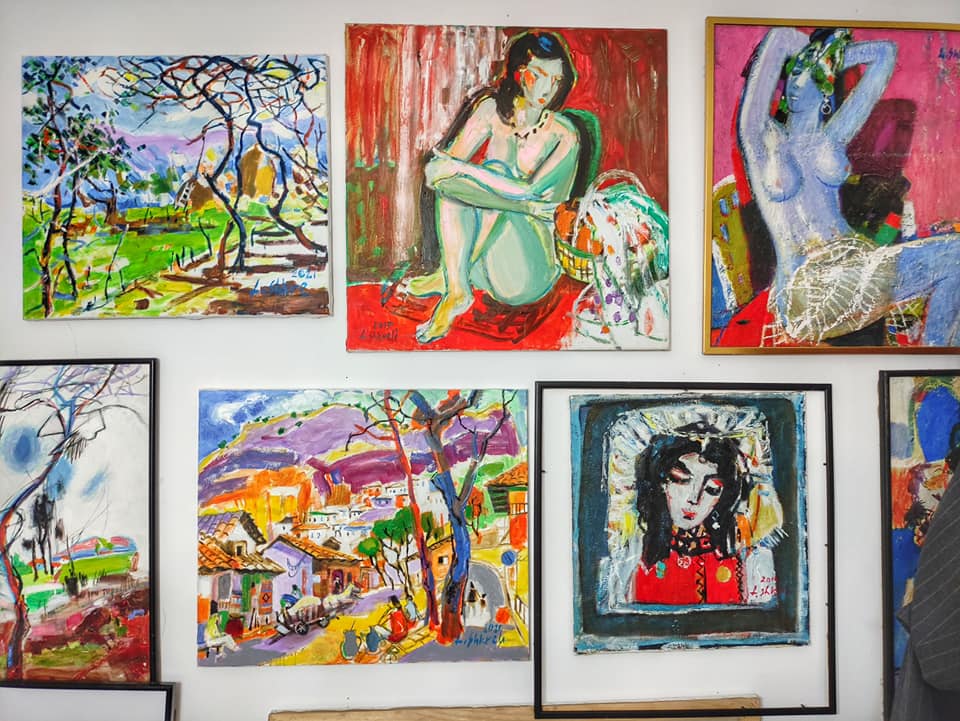 Lec Shkreli was born in Tirana in 1942. His family, like his surname, were originally from Shkodra in the north—an area that is reflected in much of his work. He studied at an art school in Tirana between 1956-1960, under the supervision of well-known painters Sadik Kaceli and Abdurrahim Buza.

In 1965, he graduated from the Higher Institute of Arts in the studio of Gurri Madhi and Vilson Kilica. During these studies, he gained and maintained close relations with the famous sculptor Odhise Paskali, who Shkreli credits with nurturing his artistic path.

He quickly became renowned for his work, and his pieces were chosen for many national exhibitions and received awards. His socialist realism works were even featured on stamps, quite an honour both then and in the present. Today, 14 of his pieces are on display in the National Gallery in Tirana. Asides from that, and later in life, his work has been exhibited in Paris, Rome, Ankara, Moscow, Berlin, and even as far afield as Beijing.

But becoming an artist during Albania’s communist regime was not easy. Remaining in favour was even more challenging. 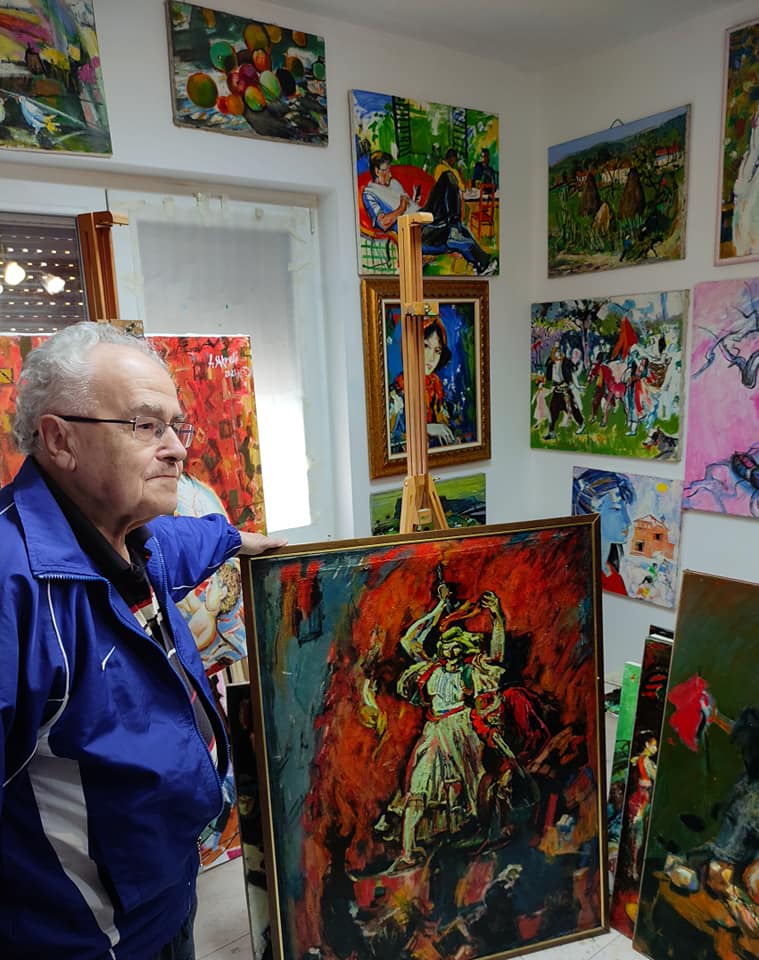 Between 1944 and 1991, Albania was in the grips of an oppressive communist regime ruled by dictator Enver Hoxha. Many artists, intellectuals and writers were purged. They found themselves imprisoned, persecuted and even executed. Others managed to continue working as long as they followed strict instructions and guidelines from the state.

Shkreli was amongst the latter. He explained that from school, he was taught to, quite literally, paint within the lines. All of his work had to be realistic and could not be considered abstract or modernist. It also typically had to depict the socialist utopia that Hoxha dreamt of, despite the dismal reality. Heroes were painted with ripped muscles and impressive stature, while the majority of the population starved.

He explained how many of his pieces had been dismissed or deemed not to the requirements of the Albanian state. In one instance, he recalls meeting Hoxha, who placed a hand on his shoulder and congratulated him on one piece. Shkreli knew that the dictator’s approval could mean the difference between freedom or death, and as Hoxha’s hand rested upon him, he found himself somewhat frozen with fear.

But as an artist, Shkreli found it hard to restrain himself to the constrictive guidelines of communist Albania. He found himself painting some wild and creative pictures, ones that would see him locked in Spac, a prison labour camp in the north if he was caught. Instead, he stashed them inside his house, hidden away, hoping for a time when they would see the light of day.

His daughter Inis explains that knowing these dangerous secrets was a huge burden to bear as a child.

“Imagine being just four years old and carrying this with you, that you have hidden in your home something that could destroy everything,” she says.

Many were not so lucky.

Edison Gjergo was an Albanian painter famous for his work that was far from the constraints of socialist realism. He was influenced strongly by modernism and cubism, with a hint of the style favoured by the communists. Sadly, he was arrested in 1975 and spent eight years in Spac, his only crime being pursuing his artistic ideals. 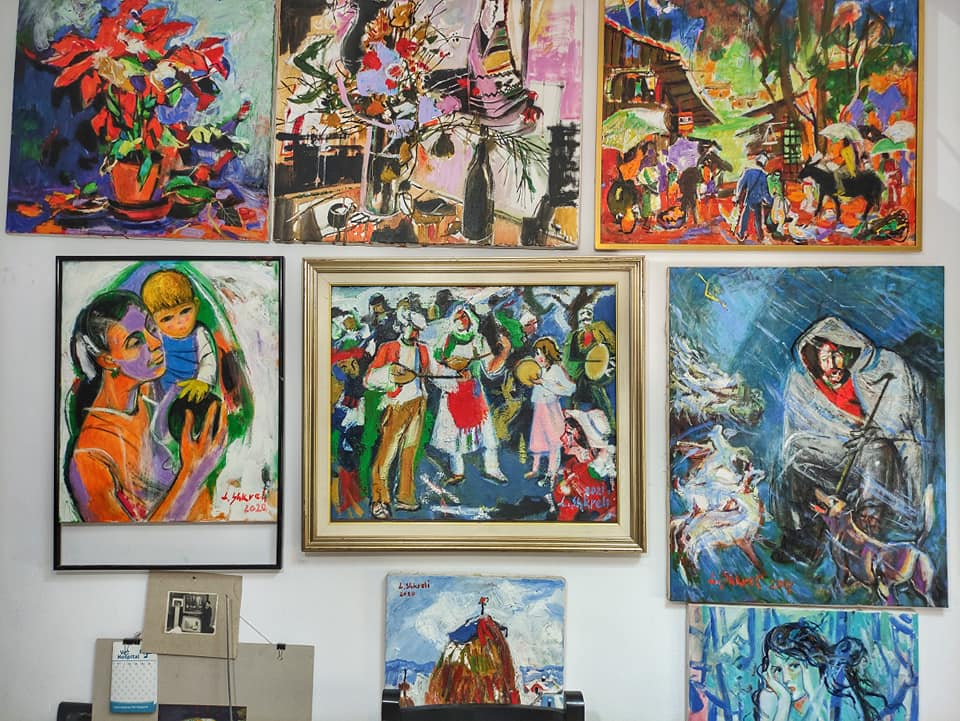 Sentenced on charges of agitation and propaganda, many of his friends and family were also detained. After he was released in 1982, he lived for just another seven years, under the watch of an extensive network of communist spies.

Shkreli could not risk leaving his family behind, and traumatised by what happened to his friend Gjergo,  he concealed his art and dreams of true expression, where no one would find them.

My questioning of the communist years continued. Like with many I interview, getting them to open up about these times can be hard. This comes, no doubt, from decades of enforced silence and a deep distrust of anyone outside the family walls.

But as I persisted, the artist began to open up. He explained how Kristaq Rama, the father of current Prime Minister Edi Rama, used to visit his studio.

“He helped me in some way and somehow. He would give some subtle advice on what was acceptable or what would not be accepted by the party.”

This advice was much welcomed, although Rama- himself an artist and sculptor- would then go on to sign the death warrant of poet Havzi Nela and a young man from Dibra, Enver Osmani.

After more than 30 years of working under the strict conditions of the politburo, in 1991, Shkreli was finally free. When communism fell, his work bloomed, and his subject matter expanded beyond that of brawny heroes and ‘happy’ workers. 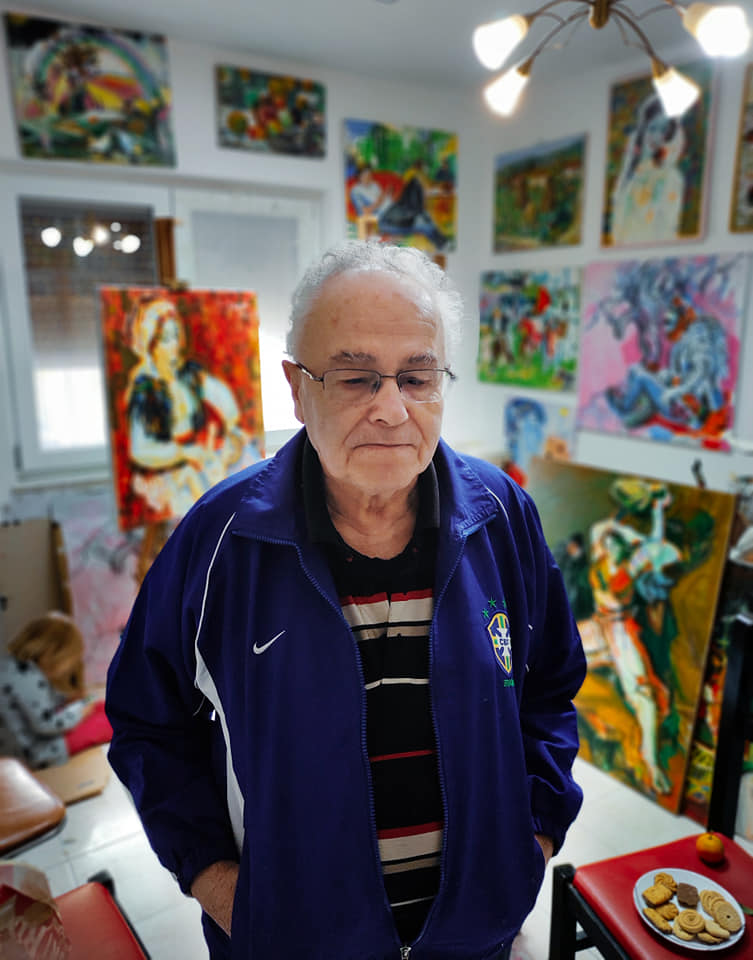 Now he paints with every colour imaginable. He travels to villages and towns to paint the landscape and inhabitants, and there is not one single restriction on what and how he can create. His work not only serves as an anthropological study of his country and its people, but it represents the sense of enlightenment and hope experienced by many when democracy, no matter how fragile it is, came.

Shkreli paints with abundance. No topic is off-limits, and it’s almost as if he tests himself in terms of style and colour with every canvas he touches. After living under harsh restrictions for so long, the joy he feels over his newfound freedom is palpable in every brush stroke.

No longer painting for dictators and communists, Shkreli’s work hangs on the walls of some of the country’s best known public figures and business people. His work is desired by those who adore the mix of traditional subjects and modernist style. They are also in demand from those who want to hang something truly beautiful and unique on their wall.

Now, Shkreli teaches students as well. He schools them in both conventional and non-conventional styles. I can only imagine what a young student would think when walking into his studio. If I was them, I would be in awe and would hope that just one iota of Shkreli’s talent and artistic eye, rubbed off on me. As far as inspirations go, there aren’t many more inspiring than him.