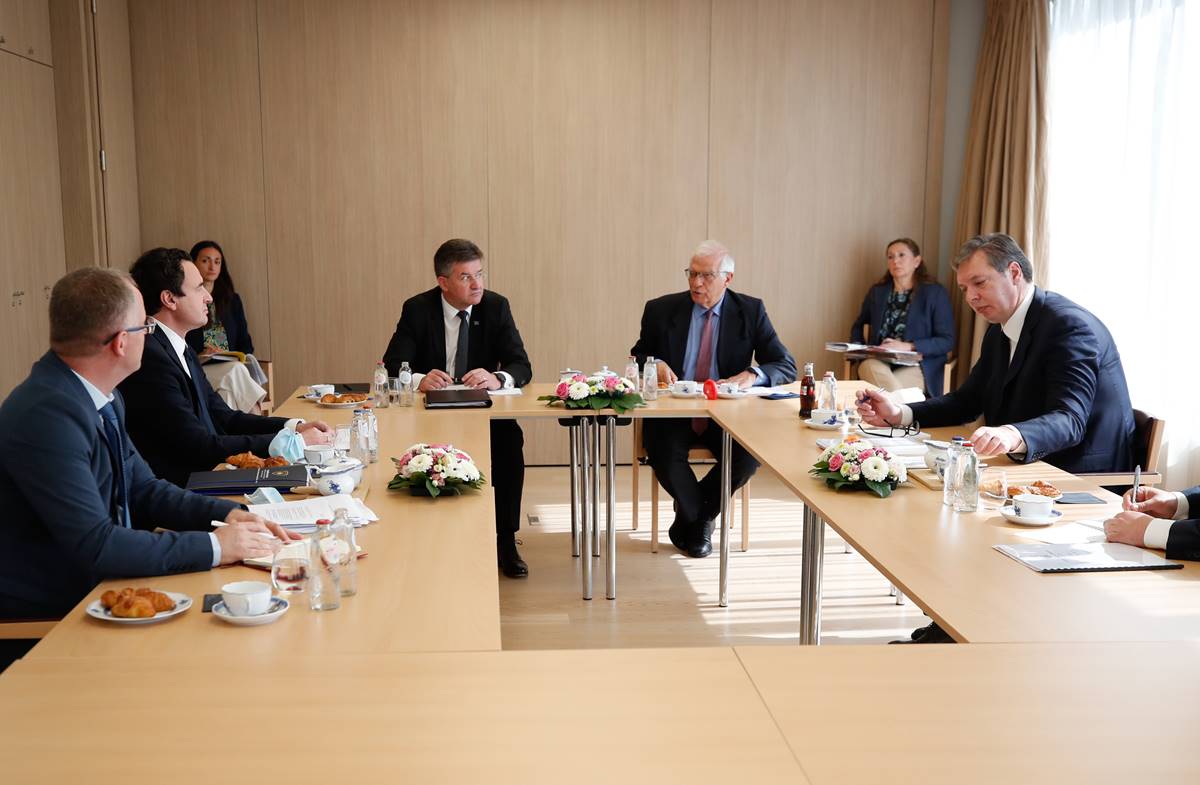 The first meeting between Kosovo’s Prime Minister Albin Kurti and the President of Serbia, Aleksandar Vučić, held in Brussels on Tuesday, ended with no concrete results. This was their first meeting as leaders of their countries’ dialogue teams.

Kurti said that the two parties did not agree on the agenda for future dialogues, adding that he had made four proposals, among which the establishment of a National Council for Kosovo Serbs.

He made it clear that Kosovo does not accept the formation of the Association of Serb-majority Municipalities, as the Constitutional Court has ruled that such associations would contravene Kosovo’s Constitution on 23 points.

“We do not want for the majority to be privileged over the minority, but we cannot allow the same scenario as Bosnia and Herzegovina,” he said.

Kurti proposed for the six Western Balkans countries to switch from CEFTA to SEFTA (South-East European Free Trade Agreement) according to the EFTA-EEA model, an agreement that Liechtenstein, Norway and Iceland have with the EU.

Another proposal put forth by Kurti is for both countries to immediately sign a joint peace agreement pledging not to attack each other.

The issue of missing persons was also one of Kurti’s proposals.

“On the issue of missing persons, Mr. Veljko Odalović [Serbia’s President of the Commission on Missing Persons] should be removed from his position and should be interrogated,” Kurti said, specifying that the former was one of the high state officials operating in Kosovo during the time when the country was occupied by Serbia.

He added that three of his proposals were rejected, while he received no response on CEFTA.

Vučić, on the other hand, told media that there was “absolutely” nothing he and Kurti agreed on.

“They [the Kosovo delegation] came to agree on nothing, absolutely nothing,” Vučić said after the meeting.

He added that the Kosovo side does not want to fulfill the agreements they have signed already.

“So, they do not want to discuss the Association of Serb-majority Municipalities at all. Secondly, they urgently asked to immediately hear when we will recognize Kosovo’s independence and thirdly, they call incidents and provocations the fact that Serbs want to participate in liturgies in their churches,” Vučić stated.

Vučić said he will “never” recognize Kosovo as an independent country.

The EU Special Representative for the Belgrade-Pristina Dialogue, Miroslav Lajčák, commented that the meeting was not an easy one “but it was important that [it] happened.”

“Both leaders had a very open and a frank exchange on what they each want from the dialogue,” Lajčák confirmed.

He added that for the EU, it is important that both leaders confirmed that there is no other way forward but to normalize relations between Kosovo and Serbia, and they are both committed to work on the comprehensive normalization of relations through the EU-mediated dialogue.

“The dialogue process will continue before the end of July,” Lajčák said.

He added that the EU and citizens of both countries have high expectations for the two leaders and hope that they will be able to overcome the legacy of the past and lead Kosovo and Serbia to their common European future by being able to normalize relations between them in a comprehensive way.

The Kurti-Vučić meeting was mediated by Lajčák and the EU top diplomat, Josep Borrell, who had confirmed that the meeting would not be easy.