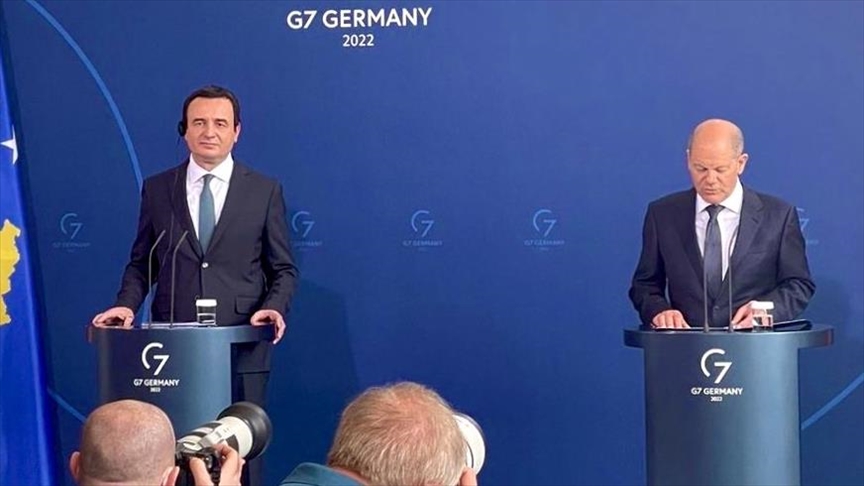 German Chancellor Olaf Scholz has announced his plan to revive the Berlin Process and specifically push forward the Common Regional Market, a robust initiative agreed by all Western Balkan countries, parallel to which Serbia, Albania and North Macedonia have launched their Open Balkan initiative.

“Regional cooperation has great potential. Germany has been engaged for several years within the Berlin Process in this direction. Together with partners, I would like to revive this with an invitation to Berlin in the second half of the year. The current most important project of the si Western Balkan countries in the framework of the Berlin Process in the establishment of a Common Regional Market. I hope we will rapidly finalize four important agreements, including the free movement of people and recognition of professional diplomas,” Chancellor Scholz stated in a press conference with Kosovo Prime Minister Albin Kurti on Wednesday, as it was heard from the Albanian translation.

Scholz’s promise to advance the Common Regional Market (CRM) with renewed energies casts serious doubts on the future of the Open Balkan initiative.

The (CRM) was established in November 2020 under the Berlin Process – a platform under the umbrella of the European Union that aims to strengthen cooperation between the six Western Balkan countries and help their integration into the European Union.

Under the CRM, the six countries removed roaming tariffs between them in July 2021, while more agreements are expected to be signed in the next summit, covering travel mobility with ID cards, travel mobility for third country citizens, and the recognition of academic and professional qualifications.

Parallel to the CRM, the leaders of Serbia, Albania, and North Macedonia have launched the Open Balkan initiative. It specifically focuses on the free movement of people, goods, services and capital in the region, which are also part of one of the four main pillars of the CRM.

The remaining three countries in the region – Bosnia and Herzegovina, Kosovo, and Montenegro – have so far refused to join the Open Balkan, despite repeated calls by initiators. They argue that an initiative like the CRM under the Berlin Process is inclusive and more beneficial to the region and each country.

This is exactly what Kurti stressed in today’s press conference with Scholz in Berlin.

“We fully support the Berlin Process, we welcome the Chancellor’s dedication to restart the process with new dynamics. We also support the Common Regional Market, which is inside the Berlin Process and according to EU rules: it is all inclusive, it has the four freedoms. We do not support other parallel initiatives,” Kurti stated, clearly slamming the Open Balkan.

He further noted that for Kosovo, “regional cooperation is not a substitute for European Union integration; it’s rather an accelerator,” – a statement that seems to oppose an earlier call by Albanian Prime Minister Edi Rama for the EU to explicitly support his initiative and push the refusing countries to join the Open Balkan given the lack of further EU enlargement.

Scholz also noted during the Q&A session with journalists that the six countries “participate willingly” in the Berlin Process and their leaders are happy about his plan to call a summit this year. “There will be good grounds for cooperation to work [in the Berlin Process] and for great results to be achieved. This cannot be announced ex-cathedra but should be achieved in unity,” the chancellor said.

The three Open Balkan leaders – Rama, Vucic and Zaev – have been criticized for launching their initiative without consulting the rest of the countries in the region.

Asked on his reasons for supporting the Berlin Process and dismissing the Open Balkan, Kurti noted that the latter could open the way for Russian influence in the Western Balkans.

“Europe is our continent and the EU is our destiny. We accept, welcome and consider all regional initiatives beneficial when the EU is found inside them as values and an active participant. All other parallel initiatives that strive to open the Balkans to powers from the east and north-east, we don’t welcome them and consider them unnecessary. Kosovo and the Balkans are open to the EU, NATO and Germany, and this is more than enough.”

The plan for the Open Balkan was announced in 2019. Its achievement so far has been for Albanians and Serbs to travel in respective countries using only an ID.

Its leaders have promised on multiple occasions numerous agreements to be signed in the near future, but skepticism in the regional and in European capitals about the initiative have resulted in summit after summit where Rama and Vucic call on the three refusing countries to join in.

No leader of any major European country has ever mentioned the Open Balkan by name, although they haven’t straightforwardly opposed it.

Rama and Vucic have vowed to continue their initiative independently from Kosovo, Bosnia and Montenegro’s refusal to join.