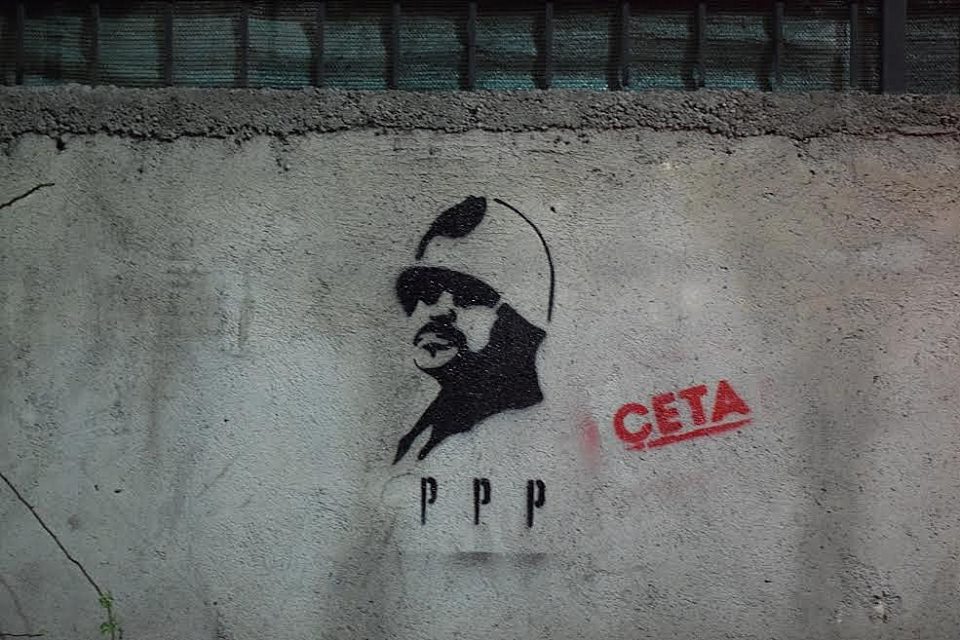 On November 29, on what is considered Liberation Day by the Socialist Party – the Democratic Party celebrates it a day earlier – public art collective Çeta placed several new graffitis throughout Tirana protesting the public-private partnerships (PPP) undertaken by the current government, comparing the legal construction to the corporatism of fascist Italy.

The graffiti consists of an image of Prime Minister Rama wearing a helmet, resembling a well-known portrait of the Italian fascist dictator Benito Mussolini, on top of the letters “PPP.”

In a public statement littered with literary allusions, Çeta explained their latest work as follows:

Fascism, in brief, is the merger of all dominant forces in society around the figure of a supreme leader: the bourgeoisie, bankers, bureaucrats, magistrates, clerics, media, police, and gangsters come together around the Duce, whom they serve and who serves them over the back of broad layers of society through violence and abuse.

This is the history of fascism. The old one and the new one. Because fascism, like any history, is said to repeat itself, first as tragedy, then as farce. But here, with us, in Albania, fascism is sitting with its legs crossed, like a tragical farce. As undeclared fascism.

Public-private partnerships, or the private through the public, is the new marriage between state and business, where the former becomes a tool in the hand and to the profit of the latter. Rights are given by concession. Money has become the heart and reason of any relation. Politics has becoming the police and the police robotic.

Private property is sacralized while desecrating and cursing the small human life. Police officers in black shirts fight every day with the villagers of the fruits and vegetable that have illegally fallen upon the city, with the unemployed, with the street sellers, with the beggars and the Roma, in the name of taxes and culture.

Orwellian machines numb the minds of the masses and censor deaths, or, more precisely, the murders of poor kids on mountains of trash, on building sites and in barracks.

But steadfast poppies have sprung up on the walls and roads of the city, writing graffiti and criticizing with nutritious articles, against the schools that have became police stations and the police stations become schools for the “education” and “disciplining” of society, through the “reforms” of the “Penal Code.”

For many this reality may seem dystopian, an impossible evil, a bad dream from which we have to wake up. But in fact it is reality itself, beyond the pink bubble of comfort and shallow arguments.

So it is time that we wake up, and to take sides.

On Friday December 2, at 19:00 Çeta will participate in the opening of the exhibition Triple Feature in Tirana Art Lab.