Rama and Lu’s Last Tango – Arrests for Tahiri and Llalla 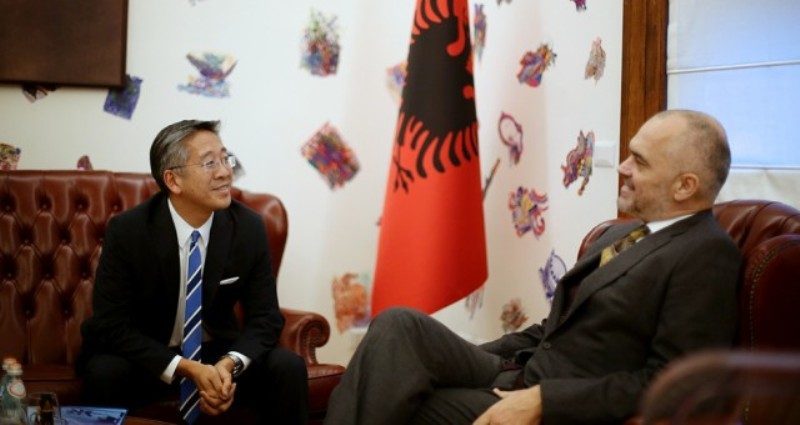 The Court of Serious Crimes is expected to issue in the next couple of days an arrest warrant for  former Minister of Interior Affairs Saimir Tahiri and, within next week, and arrest arrest warrant for former General Prosecutor Adriatik Llalla.

Germany has requested Tahiri’s arrest as evidence of Prime Minister Edi Rama’s resolve to fight crime and corruption, as well as non-negotiable condition for the opening of Albania’s accession talks with the EU.

The Prime Minister was made aware of this condition several months ago, yet he attempted to sidestep it, in the hopes that the European Commission’s positive Progress Report, that barely mentioned the Tahiri issue, would be enough to appease the Germans. However, during his visit to Germany, three weeks ago, Rama came to realize, not only that the Tahiri condition would be inescapable, but that he personally would risk becoming the target of German criticism for protecting crime and corruption, if he did not allow Tahiri’s arrest.

Consequentially, Rama promised German Chancellor Angela Merkel that he would allow the former minister’s arrest and received, in turn, a promise that the Chancellor would attempt to soften the skepticism of several German MPs.

Therefore, upon returning from Germany, Rama set into motion his plan to allow for Tahiri’s arrest, but in a way that neither Tahiri, nor himself would be face grave consequences. He made it clear to Tahiri that him remaining free would turn would backfire, as it could endanger Rama’s own grip to power, without which both Rama and Tahiri would be lost. Tahiri gave in and chose to resign as MP in order to spare himself and the socialist majority the spectacle of having his immunity lifted by the parliament.

However, while Germans want Tahiri’s arrest, the US ambassador Donald Lu wants former General Prosecutor Adriatik Llalla’s arrest which serves his own personal interests. The Lu-Llalla feud has now become ugly and personal, however, Lu is not irrational in his demand for Llalla’s arrest: he seeks to undermine Adriatik Llalla’s credibility, so that, if the Llalla chooses to challenge or testify against Lu, regarding the ambassador’s many questionable actions in Albania, from interfering in Bankers Petroleum Investigation to his continuous meddling in the prosecution system affairs, his account will not hold any credibikity and will not harming Lu’s career.

Llalla has already  shown that he is willing to denounce Lu, as he attempted to do before the U.S. Congress more than a year ago, and therefore he remains a continuous threat to the ambassador. It is, therefore, not exceptionally far fetched to think that, in order to secure Llalla’s designation under Section 7031(c) of the FY 2017 Consolidated Appropriations Act banning him from entering the United States, Lu may have submitted to the State Department inaccurate or false information on Llalla, and most likely has not revealed their public conflict to his superiors.

Lu is fully aware that the moment he leaves Albania, he will no longer hold any power or influence, neither in Albania nor in the State Department. Therefore, he is in an urgent mission to press the prosecution office to deal with the “Llalla issue” before he leaves the country on July 20th.

On the other hand, the Rama-Lu duo is under the pressure of public opinion, both Albanian and international, to show any evidence of the progress of the Justice Reform, at a time when it is failing spectacularly, leaving Albanian justice in a pitiful state: the basic administrative institutions of the judiciary, the High Prosecutorial Council (KLP) and the High Judicial Council (KLGJ), have yet to be formed, two years after the passing of the Justice Reform, and it is impossible they will be formed before September 2018; the Special Prosecution Office (SPAK) and the National Bureau of Investigation (BKH) also cannot be formed before the end of the year; in the meantime the Constitutional Court has been rendered nonfunctional as it is left with only 2 members out of 9 and cannot reach the quorum; the Supreme Court has been paralysed as there have remained on 9 members out of 19; while the prosecutorial system is thrown into extra-legality, due to illegal nominations of all of its leadership, and under the full political control of Prime Minister Rama and Ambassador Lu.

Yet, in their quest to achieve these objectives and in the manner they want, Rama-Lu due faced a clear obstacle, the Serious Crimes Prosecution Office, the sole prosecutorial institution that was not under their control and resisting to play to the Rama-Lu tune.

In the Tahiri’s case, the Serious Crimes Prosecution Office would not guarantee that Rama would be able to hold his end in the deal he has with Tahiri, that is to make sure that Tahiri will not stay for long under arrest and the investigation will be steered to result in light charges. The Rama-Tahiri deal was almost jeopardised last week, as the prosecutors working the case obtained solid evidence of Tahiri’s links with the Habilaj crime family, making his arrest a certainty.

In the Llalla’s case, months of investigation by the Durres Prosecution Office and several weeks by the Serious Crimes Prosecution Office have not led to any charges that would warrant his arrest. Despite of a months-long public campaign of attacks and accusations against Llalla by Ambassador Lu, and a series of damaging but speculative articles in the media sponsored again by Ambassador Lu, no credible evidence of any crimes committed by Llalla has been discovered by the prosecution. Therefore, despite of the increased pressure by the highest officials of the U.S. Embassy — in clear violation of international, Albanian and American laws — serious crimes prosecutors have not bended to their will and and have not issued any warrant against Llalla.

The Rama-Lu duo got rid of this obstacle by pushing for another illegal and unconstitutional action: General Temporary prosecutor Arta Marku dismissed the head of the Serious Crimes Prosecutor Office Besim Hajdarmataj replacing him with Donika Prela, former head of the Durrës Prosecution Office, and a close confidant of Marku.

This change in leadership has now opened the way for Saimir Tahiri’s “controlled” arrest, and Adriatik Llalla’s arbitrary arrest.

It is now a questions of days before the Serious Crimes Prosecution Office issues the warrant arrest, initially, for Saimir Tahiri, and then Adriatik Llalla.

What will follow, is hard to say. Edi Rama does not really want the conviction of Saimir Tahiri, and will attempt to carefully manage the course of his investigation. It remains to be seen whether or not the new leadership of the prosecution system, Marku and Prela, will continue serving Rama to the end, risking their own careers.

The investigation into Llalla, on the other hand, is little likely to make any progress, despite of him being arrested or not, due to lack of any ground and evidence for his investigation. Furthermore, with the departure of ambassador Lu, on July 20th, the undue pressure on prosecutors for Llalla’s investigation will also be lifted.